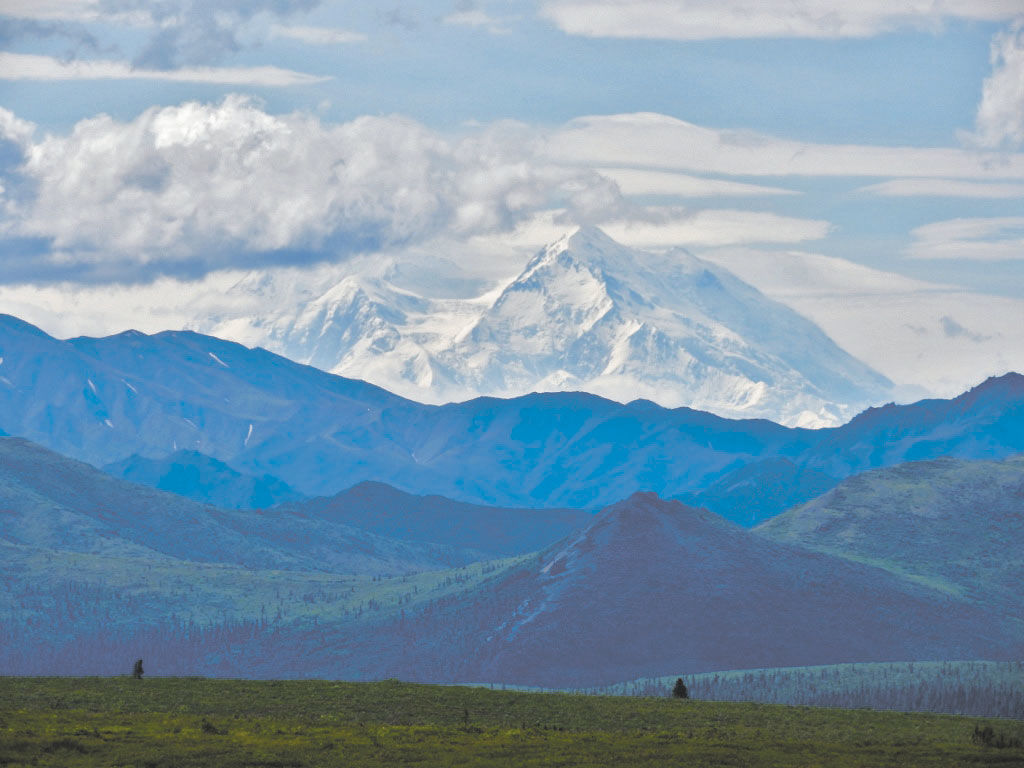 Denali (previously known also as Mount McKinley) is the highest mountain peak in North America. Its peaks are often shrouded in clouds 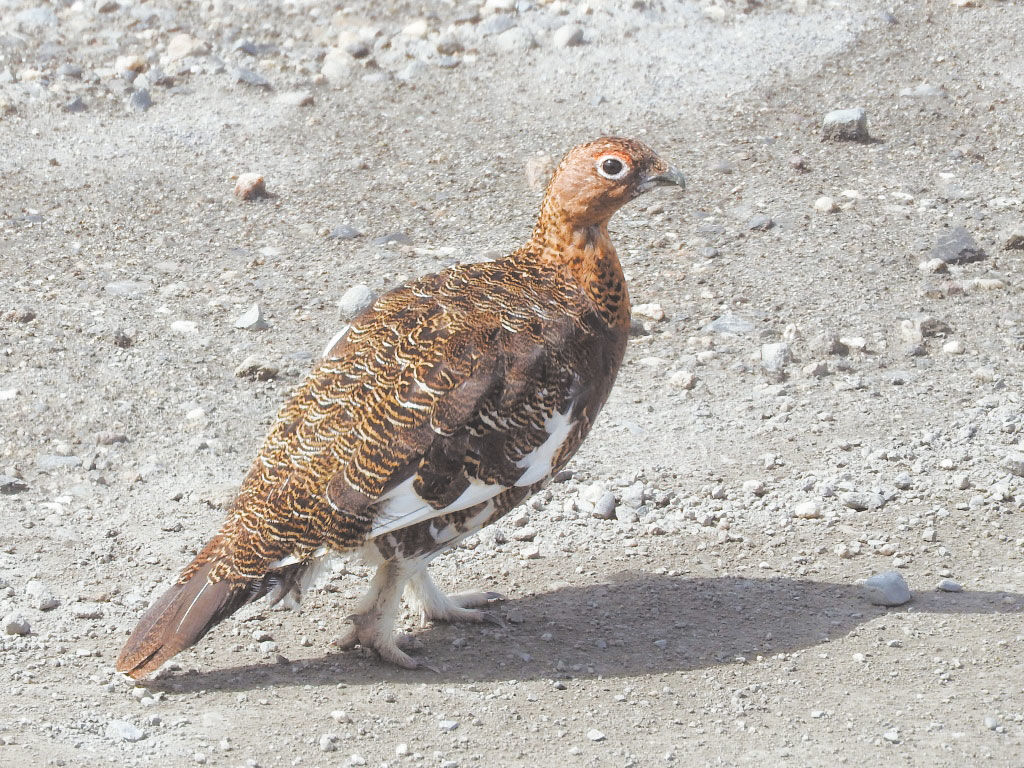 The willow ptarmigan is the state bird of Alaska (not the mosquito!). Its ancestors have roamed the tundra of North America, Scandinavia, and Siberia for tens of thousands of years. 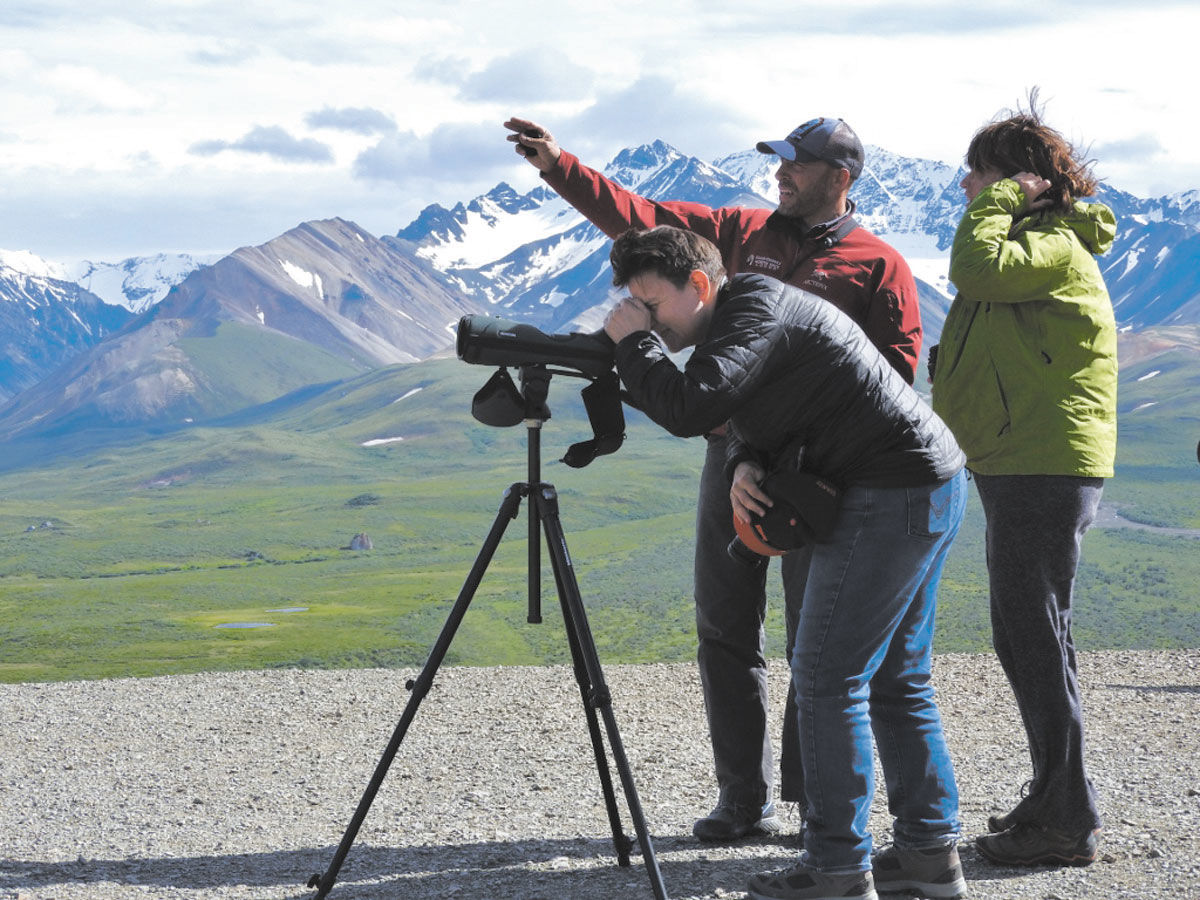 Drew, one of our naturalist guides, was always eager to bring out his spotting scope to help guests get a better view of wildlife from a safe distance.

Denali (previously known also as Mount McKinley) is the highest mountain peak in North America. Its peaks are often shrouded in clouds

The willow ptarmigan is the state bird of Alaska (not the mosquito!). Its ancestors have roamed the tundra of North America, Scandinavia, and Siberia for tens of thousands of years.

Drew, one of our naturalist guides, was always eager to bring out his spotting scope to help guests get a better view of wildlife from a safe distance.

Bright sun poked through scattered clouds as I boarded a bus at the Denali Park Depot. Ever since my graduate advisor and then a classmate told me about the amazing experiences they’d had at Camp Denali, I’d been looking forward to visiting. And now it was about to happen.

What is the draw? Besides a rustic lodge deep inside one of our wildest national parks, I’d been lured with tales of daily excursions led by talented naturalist guides; a tight-knit community; and amazing food. Somehow the stars had aligned, generosity had been extended, and I was on my way.

My first thrill was learning that Drew — a naturalist guide and today’s bus driver — had majored in geology at the University of Alaska-Fairbanks, and also has a masters of education degree. Most of the guides, I soon discovered, were vastly overqualified, but had found their special place.

“This is an essentially intact, subarctic ecosystem,” Drew began. Barely past park headquarters, Drew also commented on water in the ditches. It hadn’t rained lately. That water was seeping out of thawing permafrost. The boreal forest thrives here in the cold soil. Despite having frozen toes, these sun-drenched northern forests produce more oxygen than any other ecosystem during the summer. Their productivity, which includes the infamous biting insects of Alaska (which so far have not been worse than Wisconsin), attracts an incredible number of migratory birds.

As Drew narrated the history of fault lines, the formation of mountains, and the ebb and flow of glaciers, wildlife sightings interrupted him continually. A willow ptarmigan — cousin to the ruffed grouse of Wisconsin — crossed the road. Wildflowers danced in the sunshine. At one overlook we stopped to look at a golden eagle’s nest through the spotting scope Drew brought off the bus. Just beyond that we stopped to peer at a gyrfalcon (a rarely seen arctic cousin of the peregrine falcon) on a rock outcrop. Dall sheep, caribou, and two families of grizzly bears with two cubs each rounded out our wildlife sightings.

And then there was the mountain. The famed Denali coyly played peekaboo behind the clouds. Its North Peak was visible, but the higher South Peak stayed hidden. In the late afternoon light, its snowy shoulders glowed.

I was thrilled to see the bears and the mountain, of course, but my favorite sighting was a little different. Near the end of our drive — almost to the end of the 92-mile Park Road — Drew pointed out a lumpy stretch of grass-covered ground in the distance. That’s stale ice, he explained, leftover from when the Muldrow Glacier made a surging advance 800 years ago. A field of ice broke off from the main glacier as it melted back and became buried in sediments. Pioneering plants colonized the hills, despite their frigid cores. It continues to melt slowly.

Why was that so exciting to me? Well, 10,000 years ago when the glaciers retreated out of Wisconsin and Minnesota, many places on the landscape — including my own backyard — would have looked very similar.

Connections seemed to be the theme of my stay. The naturalist guides, staff, and other guests were all friendly and welcoming. Because all the guests arrived on the same day, ate family style, and chose from the same field trips, we had many chances to get to know one another.I loved sharing my new wildflower knowledge with other interested folks, as well as learning new plants from the naturalist guides. All of our hikes were off-trail, so having those experienced guides leading the way was confidence-inspiring.

The second full day dawned gray and rainy, but Alaskans don’t change their plans because of weather, so I chose the strenuous hike in order to stay warm. We struck out across tundra hills carpeted with wildflowers. After spotting a small herd of caribou nearby, our guide had us herd up, too. No sooner did we come together than more caribou galloped out from behind a hill, swerved toward us, and then — like a school of fish — darted away.The sound of their hoofbeats echoed in our chests.

This place seems to echo in a lot of people’s chests. One evening I sat down with Jenna — who grew up here and now runs the lodge — overlooking the camp’s tiny pond. I shared highlights from the guided hike I’d been on, and commented on how fun it was to see southerners walking on spongy tundra so similar to my bogs and fens back home. She nodded. “I hope people take home the desire to learn more about their own backyards. And by having people for more than one day, by offering progressively more in-depth experiences, we are creating stewards of the park left and right.”

After dinner, we engaged in a little tradition they call Hike Highlights, where one person from each group shared thoughts from the day. Gloria, who had been on my hike, talked about these large Alaskan parks feeling mysterious and inaccessible. Most people just see them as circles drawn on a map, with little notion of what’s there. “But now we know what’s inside the circle.”

Another guest named Brian had been on the moderate hike, where they’d spent some time viewing waterfowl through a scope. “You know,” he started, “our guide mentioned how protective he feels about the park, and I didn’t think much of it. Then, as we were watching these ducks, another group of visitors across the lake started getting a little loud and rowdy. I bristled and glared, and realized that after just three days, I felt protective about this place, too.”

The morning bus ride out alternated between a quiet and contemplative mood, and new friends chatting about one last thing. As I studied the map and reflected on the wonderful community I’d just found, it struck me that maybe I had just traveled to the heart of Denali National Park.

Emily Stone is a naturalist and education director at the Cable Natural History Museum. She is in Alaska for the summer. Follow the journey in this column, and see additional stories and photos on her blog: http://cablemuseum.org/connect/.