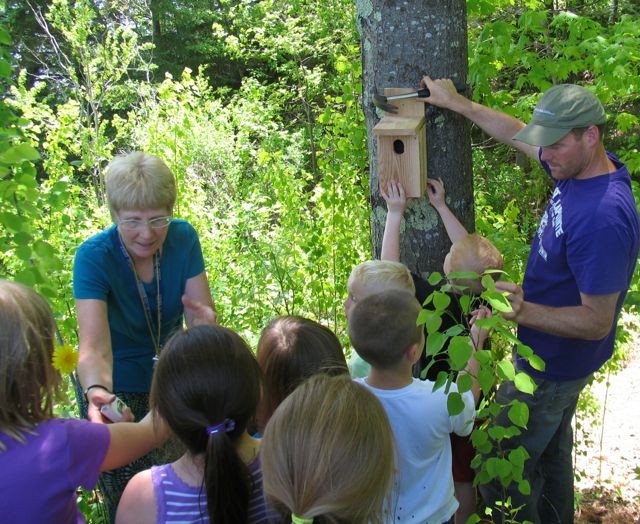 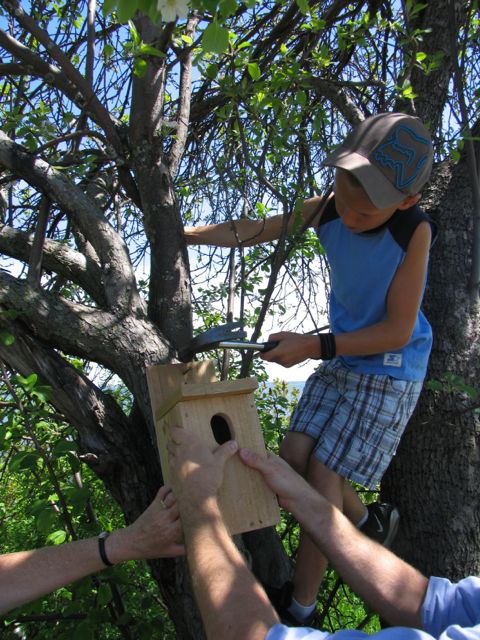 Jayden Jack, a first grade student from Washburn Elementary School nailing a birdhouse to an apple tree along the Walking Trail. 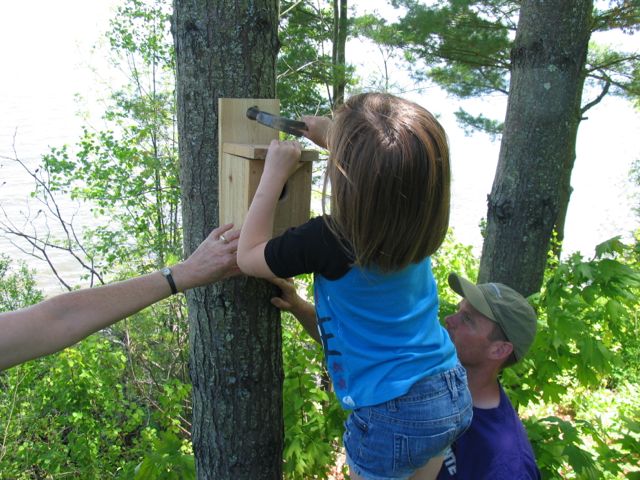 Berit Haas nailing a birdhouse to a tree with help from Leo Fish from Lake Effects Builders. 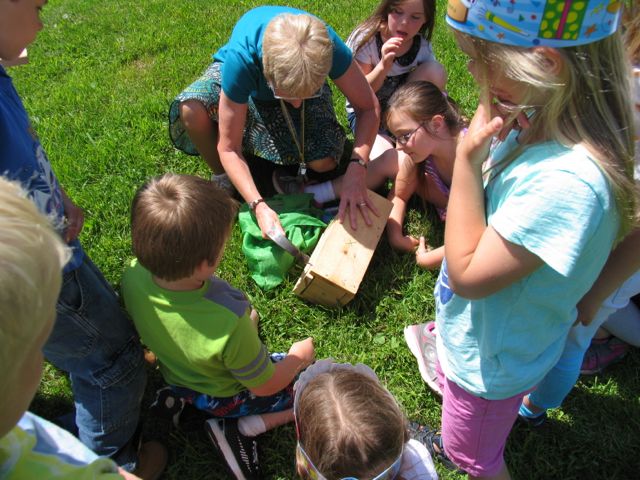 Mrs. Nutt with her students at Memorial Park in Washburn making doorknobs for the tree houses they installed along the lakeshore. 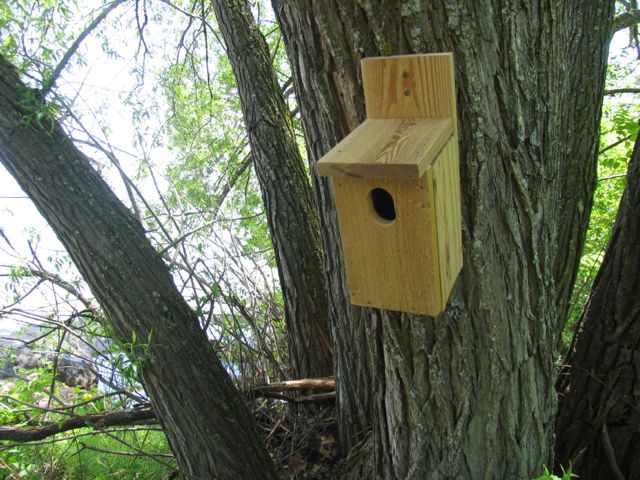 One of the bluebird houses built and mounted by Washburn Elementary School children along the Walking Trail. 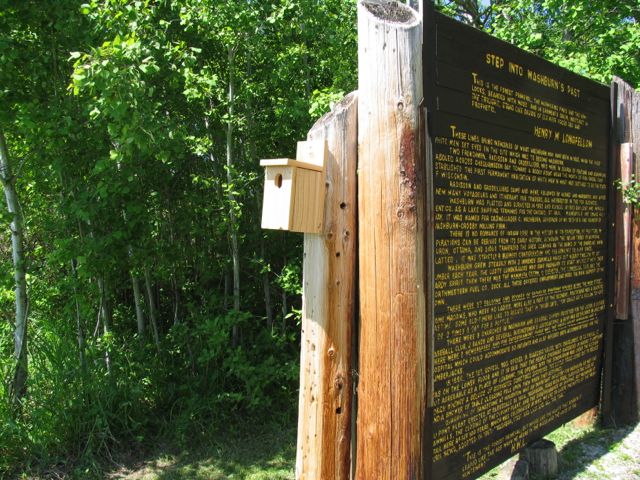 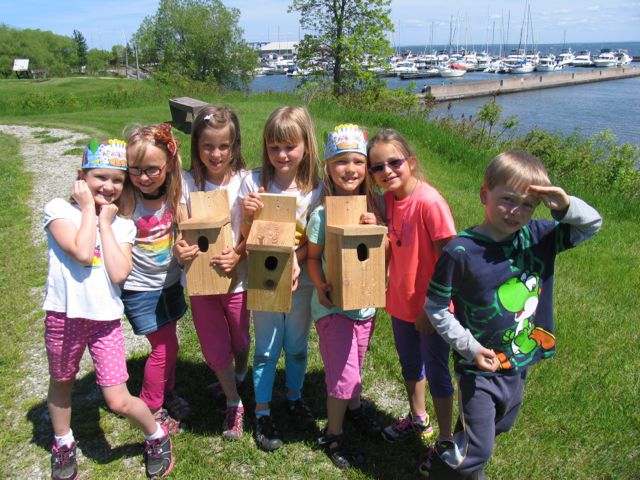 Jayden Jack, a first grade student from Washburn Elementary School nailing a birdhouse to an apple tree along the Walking Trail.

Berit Haas nailing a birdhouse to a tree with help from Leo Fish from Lake Effects Builders.

Mrs. Nutt with her students at Memorial Park in Washburn making doorknobs for the tree houses they installed along the lakeshore.

One of the bluebird houses built and mounted by Washburn Elementary School children along the Walking Trail.

WASHBURN — Just as the popular song from 1945 goes, “Somewhere there’s a bluebird of happiness,” somewhere on the back roads of Ashland and Bayfield counties are happy little bluebirds enjoying what remains of the 600 bluebird houses erected by Ralph Wikdal in the1960s. Wikdal, nicknamed Mr. Bluebird, left a bequest of $5,000 to maintain these houses after his death, but sadly very few remain. Luckily, the first graders from Washburn Elementary School have built 16 new houses to carry on with Mr. Bluebird’s tradition to protect these elusive creatures from extinction.

“The number of bluebirds is decreasing because people are taking over their habitat and insecticides are being used,” said the students in their Bluebird Fact Sheet put together last week.

On June 10, the second to last day of school, 29 six and seven-year olds went on a field trip to the lake. They’d spent weeks studying bluebirds and building houses for them.

“With the school year being extended due to the days missed because of the bad weather this winter, I wanted to do an activity with the students that involved being outdoors and had a positive impact on the community,” said Mrs. Sandra Nutt, first grade teacher. “I thought making the bluebird houses would give the students an opportunity to conduct some research and apply what they learn.”

The children flocked like seagulls on a patch of green grass last Tuesday at Memorial Park. Mrs. Nutt gave final instructions before the students installed the boxes along the lakeshore at Memorial Park, on the Washburn Walking Trail and in West End Park. The final task involved pounding and bending nails to create doorknobs in each box.

“After the babies have hatched, and you see that they’ve left, you can move the handle, open the door and take the nest out,” she said. “The mom will come back and build a new nest.”

However, the door needs to be closed during nesting so the bird doesn’t fall out. Apparently they can build up to three nests a year.

In the last few weeks students have learned a lot about bluebirds. For instance, they’re about 6 to 8 inches long; babies hatch in about two weeks and remain in the nest for 15 to 20 days; both parents care for the babies.

“There’s already a bluebird nesting in the garden,” Mrs. Nutt announced at the park.

Students built the houses on June 4.

“Leo Fish, the father of my student Liam, picked up the supplies from Olson Building Materials, cut the lumber and drilled holes in it,” Mrs. Nutt said. “He also helped the students construct the houses.”

Many other parents helped too: Chris Dale, Scott Miller, Gena Sandor, Stacy Schmidt, Jon Ludwig and Amy Barker. Eight houses were mounted around school June 4. The remaining seven were to be nailed to trees and posts on the lakeshore.

Just as mercury scatters when a thermometer breaks, when the kids were let loose in their outdoor classroom, it was difficult to contain them. On this picture-perfect day their bodies were screaming for summer vacation. Some couldn’t help themselves and took side trips, like a few steps down the stairs to the beach, before their teachers reeled them in with verbal fishing poles. But the reward of possibly being chosen to hammer the nail and birdhouse into a tree baited most of them to keep moving forward.

“My class made bluebird houses on June 4, 2014,” said Maddie Ludwig in hers. “I made three houses. Leo helped me. I bent a nail and I broke nails. My birdhouse was put in the garden.”

Each child partnered with another student to make at least two birdhouses — not quite as precise as Wikdal’s perhaps, but he was a grown man with a lifetime of experience and a lot of time on his hands.

After Wikdal retired he dedicated his life to protecting bluebirds — an interest stimulated by reading an article in Reader’s Digest about their near extinction. The author surmised that the reason for their decline was due to a lack of housing, thus the building of 600 bluebird houses.

In the book, “Washburn Memories,” put together by Catherine Johnson and published by the Washburn Women’s Civic Club, Johnson said, “When the bluebirds hatched in May, he (Wikdal) would spend whole days visiting as many as 150 houses a day. The project became a fulltime hobby.”

Unfortunately, over time vandalism and squirrels wreaked havoc in his homes. For many years following his death, the trustees of Wikdal’s estate hired individuals to repair, clean and paint the boxes. Ludwig Tranmal was one of them, as was Alvin Swanson, who at one point replaced and donated 42 additional houses. The first graders can now be added to this prestigious list of bluebird caretakers.

It was clear that some of the children were experienced carpenters. One boy, Jayden Jack, maneuvered his hammer as if he’d been given one as a rattle when he was an infant. The girls exhibited dexterity (if not determination), equal to the boys.

Half the fun that day seemed to be winding up and down the hills of the Walking Trail absorbing much-needed rays. Bluebirds aren’t the only ones who’ll be singing in the coming weeks. Summer on the lakeshore in Washburn can’t be beat. Students and teachers will be checking the boxes periodically and removing the nests when needed. It’s best to leave this task up to them and not disturb these little blue families. Everyone involved is hoping that these shy creatures, these flashes of blue lightening, will choose Washburn as their new home.

Note: Mrs. Nutt acquired a grant for $190 from the Washburn Community Education to build these houses. And Ron Leino from Washburn Public Works helped her locate appropriate places for mounting them.

To see more photos, find this story on bayfieldtoday.com.