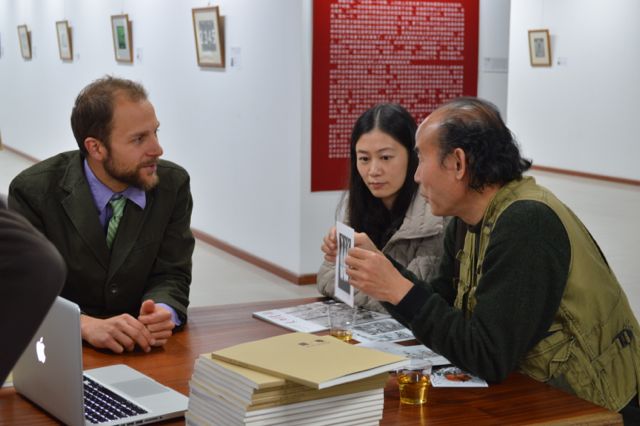 From left to right, artist Jordan Kroll, art critic Chen Li and a visitor at the opening of the Beyond exhibit in Chengdu, China November, 2013. 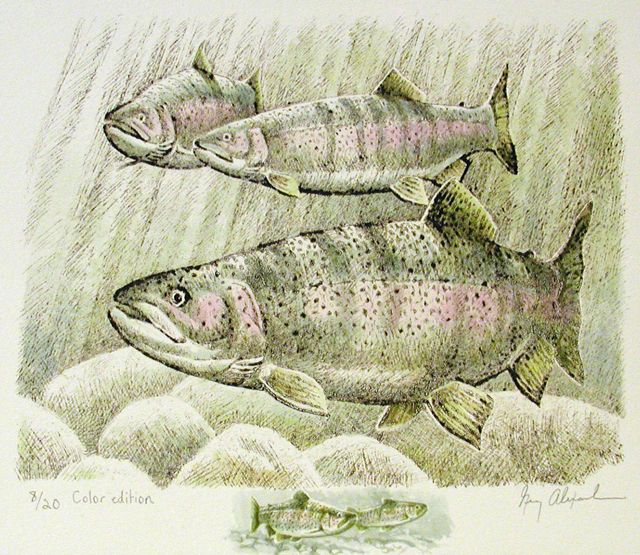 School of Trout, a hand-colored etching by Greg Alexander from Ashland being shown in the Beyond exhibit. 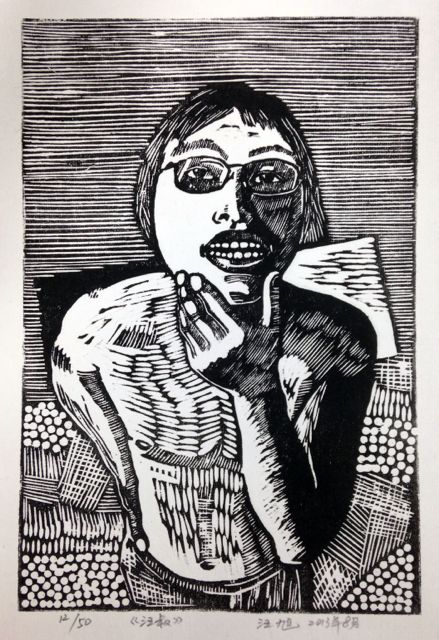 Uncle Wang, a woodcut by Chinese artist Wang Xu  exhibited in the Beyond exhibit.

From left to right, artist Jordan Kroll, art critic Chen Li and a visitor at the opening of the Beyond exhibit in Chengdu, China November, 2013.

School of Trout, a hand-colored etching by Greg Alexander from Ashland being shown in the Beyond exhibit.

Uncle Wang, a woodcut by Chinese artist Wang Xu  exhibited in the Beyond exhibit.

WASHBURN — On Hillside Drive behind a cluster of trees sits an unassuming home with an unassuming garage attached to it. An old Chinese woman used to practice tai-chi in the front yard when visiting her American daughter. But after tragedy struck (her daughter died unexpectedly), shadows filled the yard. That is, until 2005 when artist Mark Nutt and his wife Terrie bought the place and transformed it. First they cut down some trees to let more light in. Then Nutt opened Blue Rock Workshop where he works as a printmaker, runs a frame shop and offers art and business classes to the public. Last week he taught Adult Printmaking, the week before a Youth Art Camp. Now children’s laughter ripples through the neighborhood.

But it doesn’t stop there. Nutt’s artistic energy ripples overseas as well, to — of all places — China.

“We had a lot in common, both the arts and our faith,” Nutt said. “We were determined to figure out a project that we could work on together that would be meaningful.”

The friends zeroed in on a printmaking exchange with Chinese and American artists.

“I had participated in some exchanges before,” Nutt said, “when a group of artists would make fine prints — a lithography, intaglio, screen-print or a relief print (woodcut linoleum).”

In 1989 Nutt and a friend co-founded a non-profit, Art Exchange International, in Michigan where Nutt used to live before moving to Washburn. Among other things, they put on big shows in Detroit where they exhibited world class Russian, Michigan and German artists.

Nutt misses the cultural diversity of Detroit where he earned his bachelors in fine art from the University of Michigan and returned to after getting his master in fine arts from The State University of New York at Buffalo. That’s one reason he initiated this project with Kroll. Another artist, Steven Nesseim, formerly from Bayfield now living in Washington D.C., also helped launch the Sino-U.S. print exchange. The idea was to entice artists from both countries to create a work of art using one of the four print processes. The only requirement was they had to be hand-inked and hand-worked onto plates; in other words, no commercial reproductions allowed.

“We wanted that level of craftsmanship,” Nutt said. “We also have other objectives to establish: a bridge between the artists and the two countries.”

Their first bridge thrown was to establish a theme. They started out with “Greater than Man,” but over time it transcended.

“The title we ended up using in China was ‘Beyond,’ probably because there’s a nice translation ‘bian’ and the two characters basically mean ‘the other side,’” said Kroll, who’s studying Chinese. “It comes from a Buddhist idea. It means to reach the other side of enlightenment.”

Kroll has an M.A. in art therapy. He’s been in charge of finding the Chinese artists and translating communications between the two countries. In addition he’s worked closely with the gallery owner in Chengdu where the first of two exhibits of Beyond was held in November and December. The second one is currently taking place on the third floor of the Washburn Cultural Center until August 23.

There’s a total of 27 artists — 16 Chinese and 11 Americans (four from this region). Kroll and Nutt are active Christians drawn to the arts as a way of bringing different cultures and faiths together.

“We want to use the arts to communicate when words can’t,” Nutt said.

On July 9, 27 prints were laid out on the table at Blue Rock Workshop, mostly black and white but some with a few splashes of red and muted pinks. Each country has taken responsibility for framing the 27 prints shown at their respective exhibits. Nutt framed the prints for the American exhibit while Kroll, in America for a short visit, assisted.

“You look at these prints and you probably couldn’t tell which ones are from America and which are from China,” Kroll said. “The arts are universal. They’re able to communicate deeper things, things that get lost in words. We try and translate word documents, but the arts offer another language, another context for that.”

The images include fish, a baby in the womb, a grave being consumed by a tree, someone with an wide-mouth expression of surprise, religious symbols — life, birth sickness, death — universal experiences conveyed without words.

To pull it all together from the Chinese end, Kroll partnered with Su Yao, a man from Chengdu. Yao, who previously worked in a gallery, knew a lot of artists and was able to corral some topnotch participants. One aspect of the project proved to be quite challenging, however: getting the 11 American prints to China. The cost for sending them over was minimal, but at the other end, Kroll got quite a surprise: the Chinese charged a $1,500 tax to release the box in customs.

“They held it up and wanted us to pay this huge sum of money,” Kroll said. “We couldn’t pay it, so we had to send them back to Mark who sent it again with a lower value on the box.”

Lots of lessons learned. The truth is, Nutt said that everyone they communicated with “was hungry to hear about us, and we’re hungry to learn about them.” And there was a large trust factor required.

“We had to trust the artists, the gallery, and everything else,” Nutt said. “We wanted the subject matter to be about important things. That’s why we had a goal of Beyond and God, and things of God, a perspective of God in life and death. A lot of artists struggle with the same things.”

Each artist made 30-40 prints of their own piece so that everyone involved could have a personal set.

Talk about trust, Kroll said, “They can exhibit them or they can sell them, whatever they want.”

People come and go all hours of the day at Blue Rock Workshop. Four of the Beyond artists made their prints in Nutt’s studio: wildlife artist Greg Alexander from Ashland, Luke Walberg from Oulu, Lily Rawson from Washburn and Steven’s Point, also Nutt. It took over 100 e-mails and 20 Skype sessions to pull off the print exchange. One Skype session took place at the opening of Beyond in Chengdu connecting with Nutt at 3 a.m.!

Chen Li, an art critic from China, attended this event and said in her review, “The changes our world has undergone since the beginning are drastic. Man’s rational thinking as well as developments in science and technology has greatly advanced the welfare of man, who now stands fully confident and expectant for whatever the future may bring. However, these changes have not yet brought all the blessing and fulfillment that man has hoped for. Despite material needs bring (-ing) fulfilled (fulfillment) beyond our wildest imaginations, in his inner heart man is still empty.”

It’s up to the viewer to decide exactly what Beyond means. Stop by the Washburn Cultural Center and see the prints.

Also, there are four related workshops offered this month at the Cultural Center on the third floor, each starting at 7 p.m.

• August 2 — Beyond the Pacific: The Influence Of Japanese Culture On My Art, presented by Jonathan Walburg

• August 9 —Beyond Art: A Survey of Contemporary Judeo-Christian Art, by Mark Anthony Nutt

• August 16 — Beyond This: The Heart’s Longing For The Eternal, by Scott Leonard

• August 23 — Beyond Misunderstanding: Common Roots of Chinese and Western Religions, by Jim Orme

For more information about “Beyond” and Blue Rock Workshop go to www.bluerockworkshop.com.

there are four related workshops offered this month at the Cultural Center on the third floor, each starting at 7 p.m.

• August 2 — Beyond the Pacific: The Influence Of Japanese Culture On My Art, presented by Jonathan Walburg

• August 9 —Beyond Art: A Survey of Contemporary Judeo-Christian Art, by Mark Anthony Nutt

• August 16 — Beyond This: The Heart’s Longing For The Eternal, by Scott Leonard

• August 23 — Beyond Misunderstanding: Common Roots of Chinese and Western Religions, by Jim Orme