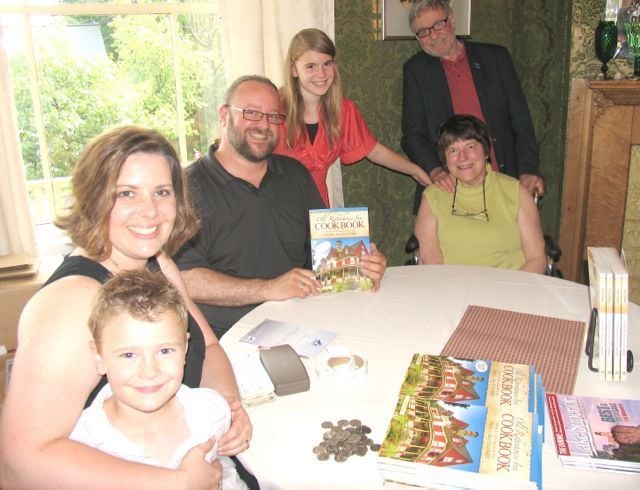 A book signing on July 30 at the Rittenhouse Inn with the entire Phillips family. From left, Max, Wendy, Mark, Kyra, Jerry, and Mary. 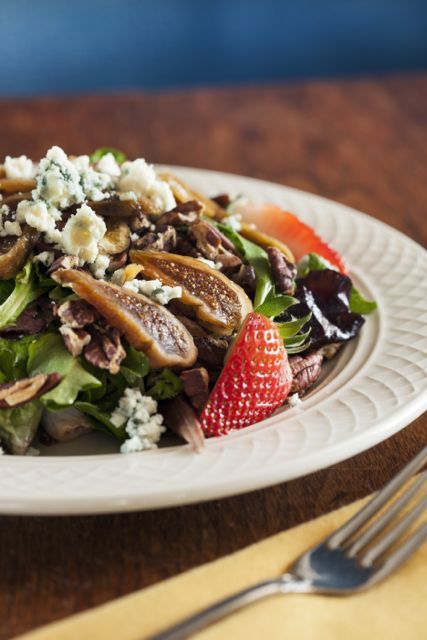 One of the recipes in the new Old Rittenhouse Inn Cookbook prepared by executive chef Matt Chingo. 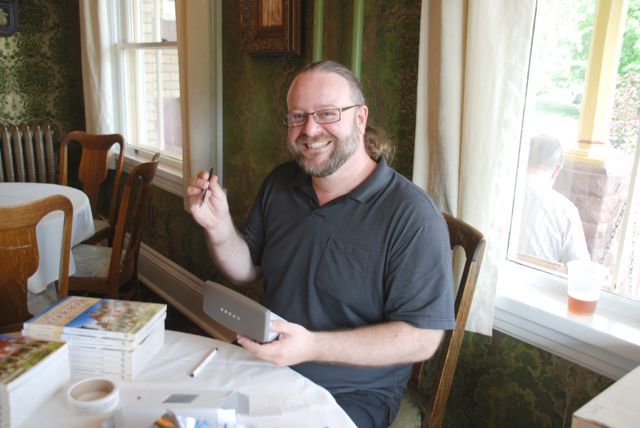 Mark Phillips, author of the Old Rittenhouse Inn Cookbook and manager of the inn, sold over 80 copies of the cookbook at the book-signing event July 30. 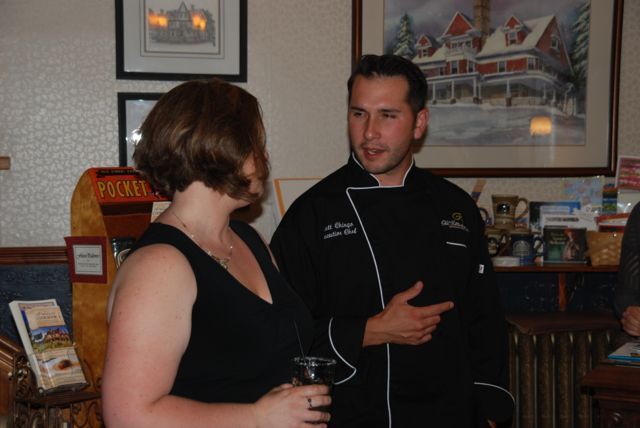 Lake Superior Port Cities, Inc., has published a new book, “The Old Rittenhouse Inn Cookbook: Meals & Memories from the Historic Bayfield B & B” by Mark Phillips

A book signing on July 30 at the Rittenhouse Inn with the entire Phillips family. From left, Max, Wendy, Mark, Kyra, Jerry, and Mary.

One of the recipes in the new Old Rittenhouse Inn Cookbook prepared by executive chef Matt Chingo.

Mark Phillips, author of the Old Rittenhouse Inn Cookbook and manager of the inn, sold over 80 copies of the cookbook at the book-signing event July 30.

BAYFIELD, Wis. — What’s not to love about “The Old Rittenhouse Inn Cookbook: Meals & Memories from the Historic Bayfield B & B,” published by Lake Superior Port Cities, Inc? This new book by Mark Phillips sizzles with 40 years of luscious family memories of the inn both on and off the stove. It drizzles with sweet and savory toppings that can almost be licked off the page. Dozens of stories, recipes and delicious photographs have marinated for years and are now being served up in 214 pages that beg for summer reading in a hammock. It also inspires hands and feet to get moving, grab a pot and start cooking.

Up until now the Old Rittenhouse Inn recipes have been hidden away in secret files viewed only by the chefs who prepare them. This book truly captures the heart and essence of this beloved, family-run business that’s become a landmark to locals and tourists alike. It’s a keepsake and a cookbook to be placed alongside “The Joy of Cooking.”

On July 30, all 64 seats in the Rittenhouse dining room were filled. Well-wishers came to purchase this new cookbook signed by the author and other family members, including his wife, Wendy, and his parents, Jerry and Mary Phillips, who purchased the inn in 1973. As to be expected, savory hors d’oeuvres prepared by executive chef Matt Chingo (who occasionally popped his head out from the kitchen) were served.

Mark and Wendy, the current innkeepers, stationed themselves at the book-signing table where the pen hardly stood still for the entire three hours.

Selling like Cumin Spiced Crabcakes (a favorite on the Ritt menu), some even bought two or three copies.

The cookbook took a year to compile, though the dream started years ago when Mary used to cook at the inn before having a massive stroke in ‘92.

“She was just working on her cookbook when it happened. So my dad and some other staff members helped to finish that project,” Mark said.

The book, “Favorite Recipes from the Old Rittenhouse Inn,” was published in 1992 by Guest Cottages, Inc. and went through three printings but hasn’t been available for 15 years.

“Ever since Wendy and I came back to the inn nine years ago we’ve been dreaming about getting that project done,” he said, referring to a revision of the cookbook. “Finally when Matt Chingo came on board as our executive chef four years ago — first as a sous chef and two years ago he became our executive chef — we really knew we had something special with him and that we could do it.”

Chingo was instrumental during the recipe phase: testing and writing them down. Recipes in hand, the next step was to find a publisher. Mark met with "Lake Superior Magazine," who had just published an award-winning pie cookbook. The editor, Konnie LeMay, gladly picked up this mixing bowl.

At first the idea was to revise and expand the original cookbook, but as things developed, a new concept emerged: a focus on Bayfield and the Apostle Islands highlighting many of the foods grown in the area plus stories about the inn, the Phillips family journey, and photographs.

“There’s this cool movement afoot to have cookbooks that are also memoirs or place-setters giving you a sense of place as well as food grown in the area,” LeMay said.

Mark appreciated LeMay’s input every step of the way.

“Konnie was my lifeline, an amazing editor and was fantastic to work with. I can’t say enough about that team up there,” he said.

It goes both ways. LeMay described a cookbook of this nature as “a nice marriage between community and cuisine.” But as with all labors of love, there’s a birthing process that can be quite painful at times, especially towards the last push.

LeMay ordinarily sets January and February aside to work on book manuscripts. However, this year Mark was preoccupied with ice cave quests at the inn. He had a tough time balancing entrees on his tray while simultaneously burning the midnight oil working on his book. A photographer needed to be hired to take pictures of the food; other photographs needed to be found and selected, including the cover photo, which was taken by Mark on his iPhone. And of course, he needed to write the narrative. It was a revved-up, race-to-the-finish-line, but finally last week an exquisitely baked cookbook was ready for consumption.

Like a cat, Mark has many lives. He’s also a musician, plays guitar, bass, trumpet and “keys” (or piano) in several bands including Fido and the Love Dogs, Alpha City, and the Liz Woodworth Trio.

“My parents started taking me to private trumpet lesson in fifth grade. We’d drive to Spooner every week,” he said.

At that time the Phillips technically lived in Hayward where his dad had an antique store, while his mom practically ran the inn single-handedly until Mark finished high school. Father and son would zoom up to Bayfield on weekends.

“We did a lot of driving and running around like crazy people, but they were fun years,” Mark said.

Little Mark often played trumpet to the guests, especially during the Christmas season with the Rittenhouse Singers. For many years his dad, a trained choral director, has led the singers and Mary (up until her stroke) accompanied them on piano. Both music majors, Mary and Jerry met while attending the University of Wisconsin-Madison, which is also where Mark went to college as a creative writing major.

Mark met Wendy in 1994 after graduating from college when he came back to work at the inn for the summer. One of his jobs was to train Wendy, previously in housekeeping, to become a front-of-house waitress.

“We fell in love. She still had some school to go. She was a music therapist majoring in Eau Claire. So she finished that out and we moved to Los Angeles for a couple years. I went to music school and she did her internship,” Mark said.

That is, until they got the siren call to come back to the Midwest to manage the inn. Mark said he had no idea how much he would enjoy this work.

“I think I was always meant to do it, but I just didn’t realize it would be this early on in my life,” he said.

Maybe in his 40s, but in hindsight taking over the family business in his 30s has proven to be invaluable.

“It takes a burst of youthful energy to see the big picture,” he said. “I used to be focused on one aspect, like waiting tables. I never thought about what goes on behind the walls.”

Or perhaps what goes into a recipe. Now he’s the man holding the cookbook, maintaining the property, leading the kitchen and housekeeping teams — “all these teams that work as one big team.” This man needs a hearty meal at the end of the day!

Thumbing through the pages of this lovely cookbook, no matter where you land — a story, a sorbet recipe, a sprig of dill delicately laid across the page — the content couldn’t be more inspirational and easy to follow even for the most rudimentary cook.

The Rittenhouse Inn just won the "Lake Superior Magazine" Best of the Lake Award for the best staff of any Wisconsin hotel or restaurant.

“It’s nice that my parents were here to help mentor us,” Mark said.

Shortly after the cookbook was finished, Mark’s daughter, Kyra (age 10), asked her dad if they could go to the store, buy some ingredients and have a cookbook party at home. Sounds like an excellent idea.

“The Old Rittenhouse Inn Cookbook” is available for purchase at the inn for $24.95.

More about the Old Rittenhouse Inn is at www.rittenhouseinn.com.