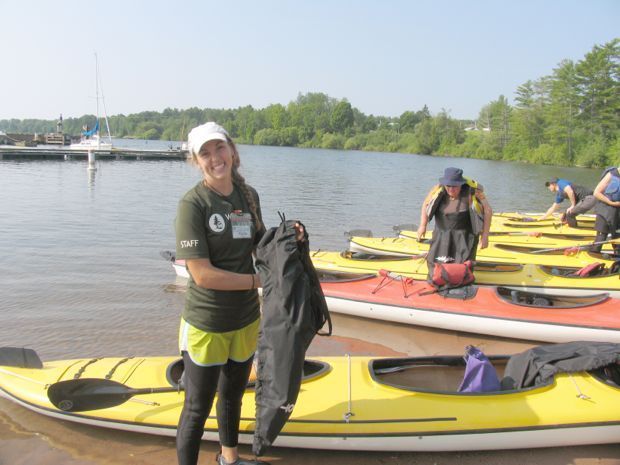 Left, Alicia Wagner, raised in Ashland now living in Minneapolis, is a kayak guide for Wilderness Inquiry. She has led numerous trips to the Apostle Islands this summer, including “Taste of the Apostles,” with food prepared by author and local food advocate Beth Dooley. 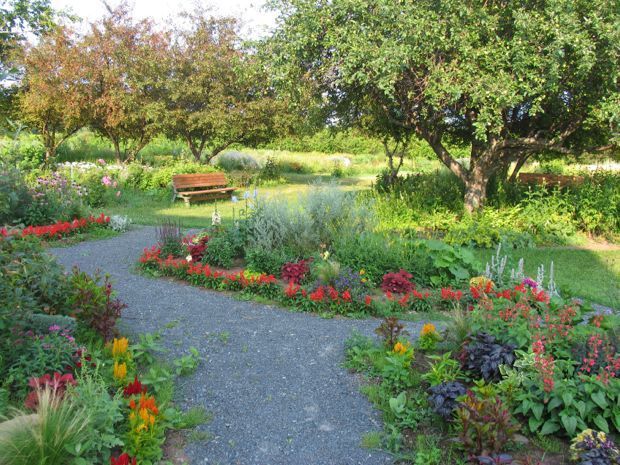 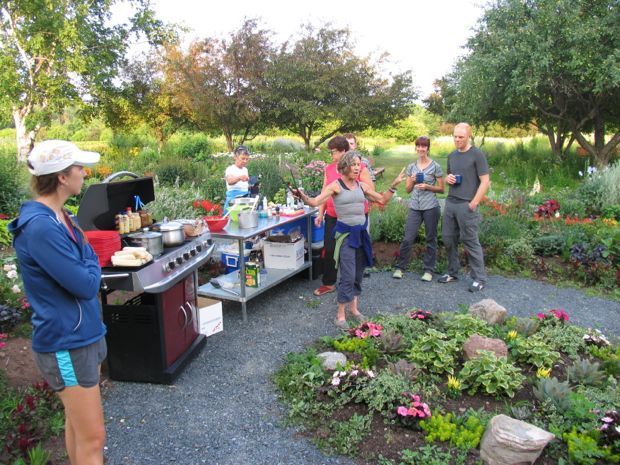 Beth Dooley at Blue Vista Farm on August 2 talking about the food she prepared for the kayakers who were on a four-day Wilderness Inquiry trip called “Taste of the Apostles.” 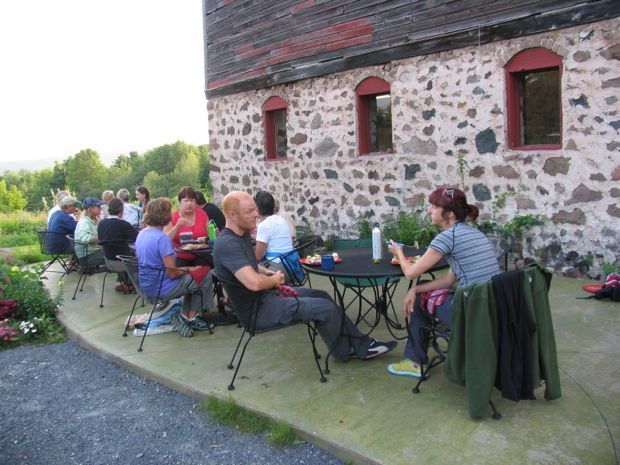 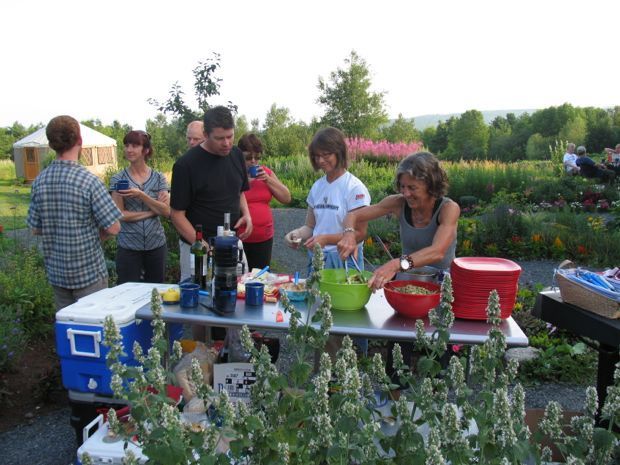 Above, author and food writer, Beth Dooley preparing breakfast for a group of kayakers on a four-day adventure trip with Wilderness Inquiry (WI) whose base camp is located in Little Sand Bay.

Photos by Hope McLeod
1 of 5

Left, Alicia Wagner, raised in Ashland now living in Minneapolis, is a kayak guide for Wilderness Inquiry. She has led numerous trips to the Apostle Islands this summer, including “Taste of the Apostles,” with food prepared by author and local food advocate Beth Dooley.

Beth Dooley at Blue Vista Farm on August 2 talking about the food she prepared for the kayakers who were on a four-day Wilderness Inquiry trip called “Taste of the Apostles.”

BAYFIELD — At 8 a.m. August 2, eighteen kayakers gathered around the campfire at the Wilderness Inquiry base camp in Little Sand Bay. Plates heaped up with pancakes, fresh blueberries and granola were being crunched and munched by athletes in need of a hearty breakfast before heading out on Lake Superior to explore shipwrecks. These are not your typical kayakers, nor is this your typical campfire grub.

Wilderness Inquiry (WI), based in Minneapolis, leads inclusive outdoor adventures all over the world. Inclusive means people of all backgrounds, ages and abilities. And adventures mean canoeing, kayaking, horse-packing, hiking, river-rafting, and taking safaris. Destinations range from the Apostle Islands to Costa Rica. This current adventure, “Taste of the Apostles,” explores the Apostle Islands on a foodie locovore feast with meals prepared by Beth Dooley, author of eight cookbooks and food columnist for the Minneapolis Star Tribune. Four days are devoted to paddling through sea caves, hiking trails to waterfalls, and enjoying Lake Superior’s sandy beaches.

Elizabeth Hinz, one of the participants, is a skilled rower in the Minneapolis Rowing Club. She paddles the Mississippi River four days a week, but also has a personal challenge.

“I’m hearing impaired, so being out in a kayak means I am taking out my hearing aids. So they’ve got me with one of the guides,” Hintz said.

Though many of the participants, including the three guides, are experienced athletes, some are not. What’s unusual about this group is that after just two days of adventuring and breaking bread together, bonds had formed. For instance, when it came time to gear up for the morning, an older gal was having difficulty getting into her wetsuit. Someone instantly hopped up to help her out. Of course there were a few preexisting bonds already — one married couple, and two good friends from Washington state.

Besides Dooley, who owns a summer home on Madeline Island and has spent 30 summers here, only one other person on this trip had local ties, Alicia Wagner. One of three guides, Wagner originally hails from Ashland and now lives in Minneapolis. Considered the senior guide on this trip, she’s been leading WI adventures for six summers.

“Last summer I spent the entire summer in Yellowstone guiding, and this summer I asked to guide up here, because this is my absolute favorite place on the planet to guide trips. I get to bring people to my back yard!” she said.

The other two guides, Mike Dunn and Ben Sadoff, come from different climes. Dunn, from Stillwater, Minn., went through a training program at WI and also came up here at the beginning of the year to get further sea kayaking training with an American Canoe Association instructor. This is his first year with WI.

“It’s amazing. I like working out in mid-water. It’s so dynamic — the weather and everything,” Dunn said.

He also said he likes how WI integrates history, geography, food, kayaking, and camping all into one trip. If it rains, for instance, the group will go to the Northern Great Lakes Visitor Center in Ashland and learn more about the region.

Sadoff, from Hudson, N.Y., was happy to get off the Hudson River for a bit, where freight traffic dominates and “the river can be pretty strong.” Not that Lake Superior can’t be as well, but last week she was a well-behaved hostess.

“I joined WI because I wanted to gain more experience working with youth and also with populations who have various disabilities. WI combines all those things in a really neat way,” said Sadoff, who first started working with WI’s Urban Wilderness Canoe Adventures Program in Minneapolis. Dooley got her start there too, writing a story about this program. She’s been involved with WI for four years, sometimes going out on trips if there’s room, but mostly scurrying around gathering ingredients for the meals.

On August 5, Dooley hightailed it to Bayfield’s farmers market after the kayakers hit the water. The plan was to meet up with them at the Bayfield Pavilion around noon.

“I run around and pick stuff up from a lot of different farms,” she said. “I get a lot from Northwind Organic Farm. And we do a farms-to-table dinner up at Blue Vista which is really wonderful, because people get to pick berries and stuff. And then I get grains and meats from Flying Snake.”

Her purchases are all locally-sourced, a passion of hers that’s sprouted three cookbooks: “Savoring the Seasons of the Northern Heartland,” “Northern Heartland Kitchen,” and the most recent, “Minnesota’s Bounty: The Farmers Market Cookbook.”

Dooley’s been coming up here with her husband and three sons for 30 summers. So slipping her pan onto the WI fire is an easy fit. This summer she will have lit four fires for WI adventures. So far she’s filled her harvest-basket with sugar snap peas, green beans, kale, chard, mustard greens, beets, and a Japanese green called tatsoi.

“We’ve been braising a lot of those,” she said. “Everything’s so late this year. I was hoping for tomatoes, but it’s too early.”

No problem. Theres plenty of other food products to choose from, like sauerkraut from Flying Snakes, and homemade cheeses from Sassy Nanny, breads from Café Coco.

“A lot of this work is about connecting people to place. And this is such a beautiful place,” Dooley said. “There’s nothing that makes me crazier than when people come up here and bring everything from the cities, when there’s so much here.”

Her main message is to get people out on the lake enjoying the beauty of the area, have them fall in love with it and want to take care of it, she said.

“If they want to come up here and have it last, food and the local economy is really part of the story here,” she said.

Her goal is to engage with farmers who utilize “best practices” (sustainable methods) and encourage visitors to do the same.

“Don’t just come up and take. Come up and engage and get to know it. You’ll have a much richer experience. And when you come back, it will be more familiar. It’s like when you know a piece of music — every time you hear it, it’s a little bit different, but familiar. You get more out of it. That’s my mission for doing this,” she said.

It took a good hour to unload the kayaks from the truck and organize gear at Red Cliff, where the adventurers embarked from Buffalo Bay for their shipwreck adventure. Their hostess, Lake Superior, rolled out a smooth-as-glass carpet for them with a cloudless sun-filled sky.

“Anyone have some sunblock?” someone shouted.

Immediately a half dozen bottles appeared out of nowhere. This is the WI way.

They visited the wrecks of the Fedora, the Ottawa, the Coffinberry, and timed it perfectly as the heavens opened up later in the day. At sundown this family of paddlers convened at Blue Vista Farm for a meal out on the patio prepared by Dooley. Surrounded by blueberry bushes and a native flower garden, the evening sang out, “Summer is here. Life is short. Make merry while you can.”

A few spots are still open on a couple of WI trips, but probably not for long.

Hope McLeod can be reached at hmcloed@ashlanddailypress.net

To find out more about Wilderness Inquiry go to: http://www.wildernessinquiry.org/

To find out more about Wilderness Inquiry go to: http://www.wildernessinquiry.org/