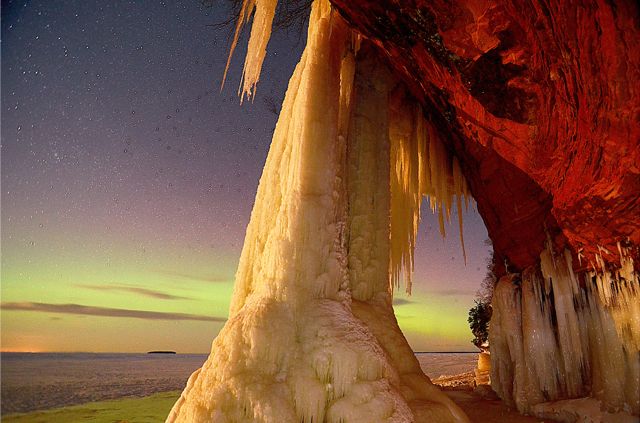 “Midnight Ice,” a photograph by Jeff Rennicke shot this winter at the ice caves. 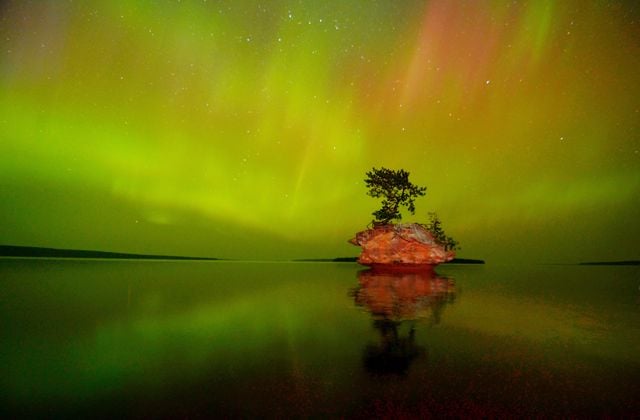 “Honeymoon Rock Under the Aurora,” a photograph by Jeff Rennicke which will be on display in the Smithsonian this fall as part of the 50th anniversary of the Wilderness Act celebration. 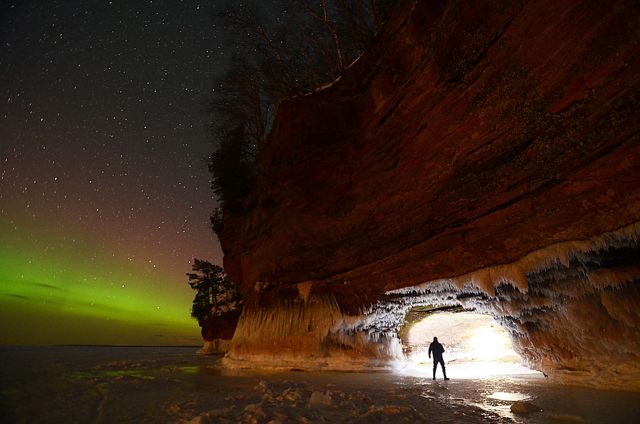 “The White Heart of Winter,” a self-portrait by Jeff Rennicke of him silhouetted inside a lit-up ice cave. 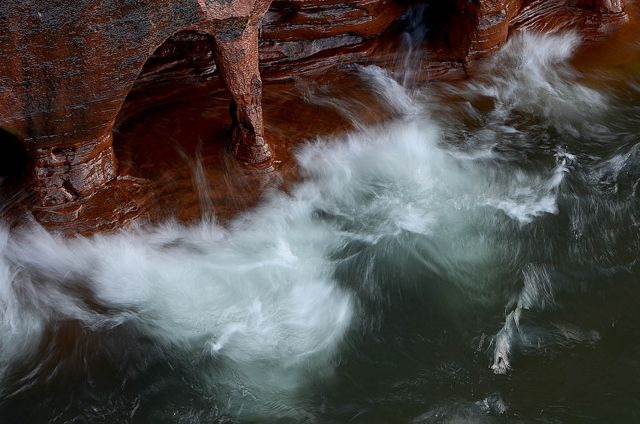 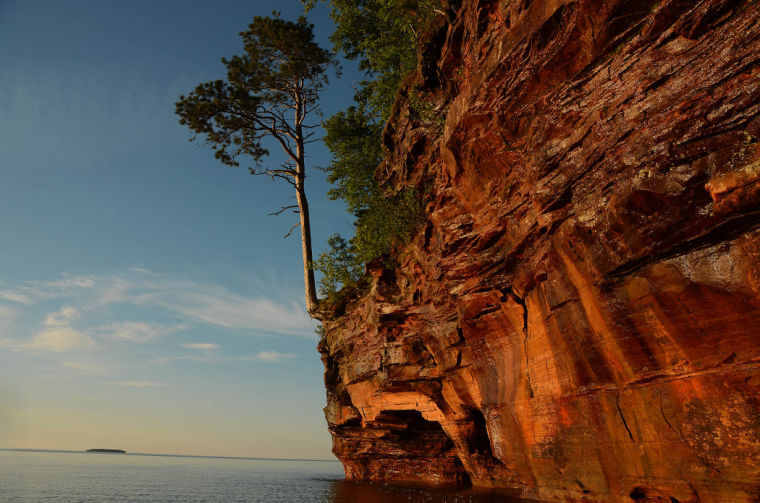 “Sea Cave Portrait,” a summer shot of the sea caves by Jeff Rennicke.

A photograph by Jeff Rennicke, “With New Eyes,” of Honeymoon Rock and a crystal ball on Lake Superior — a shot emphasizing creative ways to see the landscape of the familiar.

ALL IMAGES BY JEFF RENNICKE
1 of 5

“Midnight Ice,” a photograph by Jeff Rennicke shot this winter at the ice caves.

“Honeymoon Rock Under the Aurora,” a photograph by Jeff Rennicke which will be on display in the Smithsonian this fall as part of the 50th anniversary of the Wilderness Act celebration.

“The White Heart of Winter,” a self-portrait by Jeff Rennicke of him silhouetted inside a lit-up ice cave.

“Sea Cave Portrait,” a summer shot of the sea caves by Jeff Rennicke.

BAYFILED — NASA published a photograph of Lake Superior on June 8 revealing a few shelves of ice still hanging onto winter. Most people in Bayfield County would just as soon forget about these bergs and get on with their tomatoes. However, there’s another sector of the population still holding onto to icy memories: artists.

Potters have etched stalagmites onto their coffee mugs. Songwriters have eulogized the polar vortex in their songs.

And Jeff Rennicke has canonized the ice caves with his photographs.

Rennicke, a photographer, author and teacher, has visited the ice caves hundreds of times over the 20-plus years he’s lived in Bayfield. But nothing compares with what he and half the world saw this last winter.

“The heart of the ice cave phenomenon is a lot of people are focused on the social networking phenomenon, on how the ice caves grew so quickly. I do think that’s important, but I think it’s a much deeper story,” said Rennicke, a storyteller who’s penned 10 books and more than 250 magazine articles. “I think it speaks to the human need for beauty in their lives.”

Rennicke has spent the majority of his adult life writing and taking pictures of beautiful places all over the globe, mostly for Outdoor Magazine and National Geographic. But in the end, he said, the Apostle Islands and Bayfield are where his heart lies.

“I’ve always felt that the best art, the strongest connection comes from a place you know really well,” he said.

And he really knows the ice caves well, also the sea caves.

“One summer I worked as a park service seasonal ranger. A big part of my duties was to be the sea kayak ranger at Meyers beach, so I got to go to the sea caves every day,” he said.

Knowing the lay of the land came in handy this winter when he took a solo trip at night.

For the first 10 years that Rennicke lived in Bayfield, he visited the ice caves often, until warmer winters changed their accessibility. They also became less accessible to him because since ’04 he’s been a writing and photography instructor at Conserve School in Land O’ Lakes, Wis., where he lives nine months out of the year. However, he wasn’t about to miss a great photo op this winter.

Rennicke made two visits to the ice caves in ‘14 — once with his daughter before the park opened and a second time on a midnight caper with he, himself and the moon.

Rennicke often pre-visualizes images. He had one in mind for the ice caves. All he had to do was wait for the right conditions, which arrived one night in mid-February. After a meeting at Conserve School, Rennicke slipped into the night at 9 p.m with his trusty Nikon D5100 flung over his shoulder. Two and a-half hours later he reached the caves and shot photographs from midnight to 5 a.m. The image he saw in his mind’s eye became “Midnight Ice,” an instant hit on Facebook with over 100,000 likes. He’s also sold numerous prints of the image.

“It’s quite important to note, I’ve been out there literally hundreds of times in the dark. It was a moonlit night, so it wasn’t as crazy as it sounds,” he said.

Nonetheless, he recommends that people not go out to the caves at night if they’re unfamiliar with the territory.

Rennicke’s been on dozens of nighttime capers involving the moon and other magical moments on Lake Superior. One late night in July he called his friend, Mike Radke, and asked if he’d motor him out to Honeymoon Rock on the north end of Basswood Island. It was pitch black outside.

“We were right out at Honeymoon Rock and couldn’t even see it,” Rennicke said. “We were inching along trying to make sure we didn’t hit the rock, and all of a sudden those northern lights came up and they just lit up the night.”

He had his camera preset and jumped out of the boat into the dark.

“I set my tri-pod up in the water with my camera just inches above the waterline and did a 30-second exposure,” he said. “The first shot just turned out unbelievable.”

That shot was “Honeymoon Rock Under the Aurora” which will be displayed in the Smithsonian this fall as part of the 50th anniversary of the Wilderness Act. This image, plus many others including ice cave photographs, are part of a traveling exhibit called “With New Eyes,” currently on display at Conserve School until mid-July. From July 16 – October 4 it will be at The Pumphouse Gallery in La Crosse with a reception 7 p.m., July 18.

The title, “With New Eyes,” comes from a quote by Marcel Proust who said, “The real sense of discovery comes not from finding new landscapes but with having new eyes.”

Rennicke’s work teeters on the edge of the mystical. A realist in the sense he takes pictures of real places in the natural world, he does tend to poetize or interpret what he sees with “new eyes.” Colors blaze with a bit more brilliance perhaps than the actual moment he clicked the shutter button. But maybe not. Who hasn’t seen a sunrise or sunset that shimmered with otherworldly colors that just didn’t translate to film? Rennicke translates very well and also speaks many different languages.

“The function of art,” he said, “is to share with people things that they may not be able to experience themselves, or even if they did, help interpret it in a way they may not have seen before.”

“Midnight Ice” and “Honeymoon Rock” are for those who can’t physically be present. Maybe they’re in a wheelchair or can’t drive anymore. Or it’s too difficult to walk down the icy stairway leading to the long march to the ice caves. Rennicke tells the story for them.

“All art is storytelling,” he said.

Though he doesn’t write stories much himself anymore, he does teach young people how to write, and he also takes photographs that speak volumes. This whole ice cave adventure has not only captured his imagination, but the imaginations of millions. Rennicke’s hoping this enthusiasm will serve a purpose beyond just another spectacular journey, another amazing photograph.

“Bob Krumenaker, Superintendent for the Apostle Islands National Lakeshore, and I were sitting on the porch the other night discussing the park and the ice cave phenomenon,” Rennicke said, “how the short window of beauty has raised the park in its national profile and shown people what a beautiful place we have here. I really hope we can translate that into people that are willing to help us make sure that it stays beautiful and protected forever.”

Long after the ice caves have melted, both inspiration and increased summer foot traffic have left their footprints in the sand.

Gayle Green of Living Adventures said, “The ice caves phenomena has substantially influenced our kayaking business; we started booking trips earlier than ever in the spring, and even now some of our summer weekends are full.”

Also, John Theil of Dreamcatcher Sailing said he has a lot of bookings for sailing trips to the sea caves. But for those who can’t make the journey, the mugs, the songs, the photographs will just have to do. Plus, these items leave a smaller carbon footprint than an actual visit to the caves.

Though they don’t supplant being in the presence of these magnificent, icy cathedrals, Rennicke’s photographs can certainly illuminate a dark night and uplift the spirit long after the ice is gone.