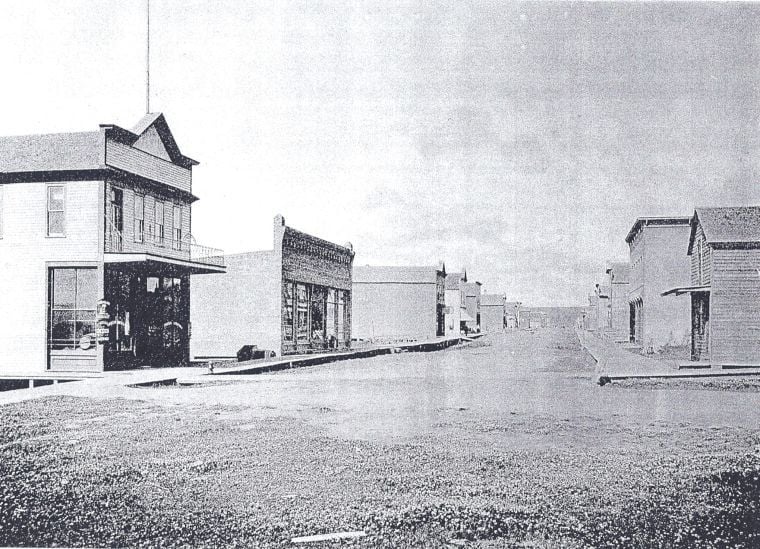 East Bayfield Street in Washburn before the “Fire Demon” came to town. 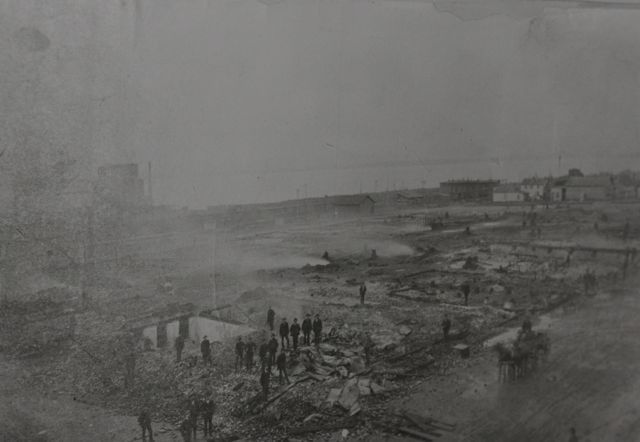 Washburn’s urban fire of 1888 destroyed a number of businesses on Bayfield Street.

Early Washburn was a virtual tinderbox during the logging boom of the late 1800s. Wooden buildings were thrown up quickly and became victims to open flame heating and illumination.

East Bayfield Street in Washburn before the “Fire Demon” came to town.

Washburn’s urban fire of 1888 destroyed a number of businesses on Bayfield Street.

WASHBURN — The Washburn Heritage Association (WHA) and the Washburn Area Historical Society (WAHS) are proud to present the third annual Tony Woiak Summer History Festival. This four-part series on the history of the Washburn area begins Tuesday, July 15 with “Fire Demon” presented by Bob Mackreth, historian and retiree from the National Park Service. This program takes place 7:30 p.m. at StageNorth Theater followed by snacks and music by the Washburn School ensemble Fire & Ice in the lobby. Yes, that’s StageNorth, technically closed but open for special events like this one, as well as on Mondays through Fridays 3:30-6 p.m. for drinks.

Mackreth said that during the logging boom from the 1870s to the 1930s, people described the upper Midwest as a tinderbox. Newspapers called it a “Fire Demon.”

“In the old days you had wooden construction primarily,” Mackreth said. “Buildings were thrown up very quickly out of the most common building material that they had (wood). The sources of heat and illumination were different from what we have now, so open flames were everywhere. And the firefighting capabilities were not what they are today. It wasn’t until the 1920s that Washburn, for instance, got its first motorized fire truck. Before that you had men pulling fire carts.”

The pre-sustainability logging practices left a lot of waste material behind. As a result forest fires were a regular occurrence across the upper Midwest. The worst recorded forest fire in North American history occurred in Peshdigo, Wis. on October, 8 1871. An estimation of 1,500-2,400 people lost their lives. Incidentally, this was the same day as the infamous Chicago fire. The fiery dragon also visited Hinckley, Minn., September 1, 1894 with as much as 250,000 acres destroyed. Though scholars still dispute the number of people killed, it could have been as high as 800.

“There were others that were not so calamitous, but pretty much it seemed every year one town or another was burned out by fire,” Mackreth said. Phillips, Glidden, Cornucopia, Ironwood, Hurley, even Washburn had its share of forest as well as urban firestorms.

Mackreth has spent his retirement years researching, writing and giving lectures on regional history. He served on the staff of the Apostle Islands National Lakeshore for nearly 13 years as District Ranger and later as Park Historian. His work has been published in numerous magazines and journals, including Lake Superior Magazine.

“I’ve basically continued with pursuing the history of this area, and it’s been a great satisfaction to me,” said Mackreth whose current attention has been devoted to the acquisition of a collection of Emmanuel Luick’s glass negatives.

Luick, a Sand Island lighthouse keeper from 1892-1921, was also an amateur photographer. Mackreth was familiar with his work, because AINL has a dozen or so black and white photos by Luick donated by the Dahl family who lived on Sand Island for a number of years. This winter Bob Nelson, fellow historian from Bayfield and board member of the Bayfield Heritage Association (BHA), contacted Mackreth regarding a collection of Luick’s negatives for sale on eBay. They put together an emergency fund drive and purchased the negatives.

“For the last couple of months I’ve been occupied with scanning and cataloguing the negatives,” Mackreth said. “I’m just finishing up on that project and hope to be turning them over to BHA.”

This is big news — even the Pioneer Press in St. Paul and the Journal Sentinel in Milwaukee heard about it and interviewed Mackreth. Warren Nelson, songwriter and founder of the Lake Superior Big Top Chautauqua, has integrated these photographs into his new historical musical, “Take Me to the Islands.” A gallery of Luick’s photos are posted on the Apostle Islands Historic Preservation Conservancy (AIHPC) website: www.aihpc.org.

Now Mackreth is burning with a new flame.

WHA and WAHS received funding this year from AIHPC for the summer lecture series.

“We always try to make it a variety of topics to appeal to a broad section of the public,” said Mackreth, who’s been involved with the festival since the beginning. “We’re really pleased. This is something we came up with three years ago in honor of Tony Woiak to figure out what would be the best way to honor the memory of this beloved local historian and help keep his work alive and promote the things he believed in. Bringing the two organizations together (WHA and WAHS) has been a very rewarding process and very enjoyable. I’d like to see it going on for quite some time into the future.”

Woiak, who devoted his life to collecting and sharing the stories of Washburn, died October 9, 2011 at the age of 57. He knew every ghost, every gravestone, every man, woman or child who passed through the pearly gates of his hometown. Woiak authored several books on the subject, made a few mystery films, and served as president of WAHS.

The other lectures this summer include:

• July 26 — “The Bishop Semb Chronicles: A Pictorial History of the Washburn School System from 1952-1962,” presented by George Semb class of ‘62, and John Foltz, class of ‘64. It also takes place 7:30 p.m. at StageNorth. Superintendent of Schools LeRoy C. Bishop, and student reporter/photographer George Semb, kept scrapbooks during their years in Washburn. Both left in the ‘60s and are now enjoying reconnecting to people, places and memories of their Washburn youth. Audience participation is encouraged, so bring a memory to share. Recorded music from the ‘50s and ‘60s provided.

• August 5 — “Washburn City Band, ” presented by Gary Holman, lifetime resident of Washburn, 7:30 p.m. at the Washburn Cultural Center (not StageNorth). See faces and hear stories of the various Washburn City Bands who made music for their own pleasure as well as the community’s from the turn of the century to the band’s eventual demise as the Washburn Clown Band in the 1960s. Holman is responsible for the revival of another Washburn City Band for recent homecoming parades and the Souvenir Views shows at Big Top. Holman is grandson of Anton Holman who, along with his four brothers and three sons, were members of the City Band in its various forms for many years. Music by Gary Holman and Friends.

Mark your calendars for these four Tuesdays and enjoy a bit of regional history. Live music and snacks will be available after each lecture. Admission is $5.

For more information about the lectures visit: https://sites.google.com/site/washburnheritageassociation/