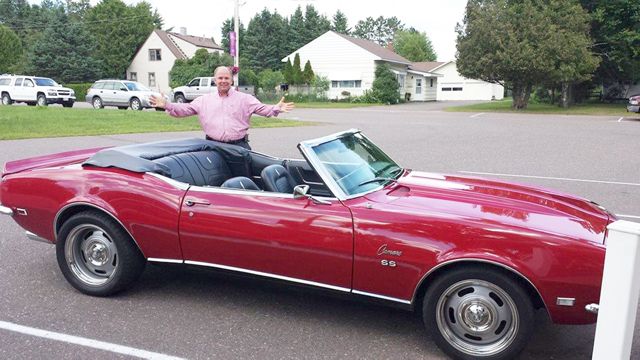 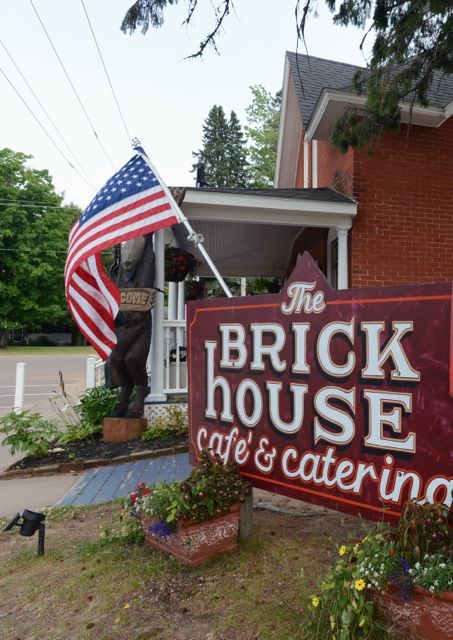 The Brick House is owned by Larry and Heather Ludzack. (Kelly Randolph photo.)

Co-owner and chef of The Brick House Café & Catering, Heather Ludzack, holds up a sign given to all the restaurants that have had the honor of breaking bread with Guy Fieri.

Photo by Kelly Randolph
1 of 2

The Brick House is owned by Larry and Heather Ludzack. (Kelly Randolph photo.)

CABLE — It’s not too often that the Food Network calls up and invites themselves over for dinner. That’s exactly what Guy Fieri did last April, or rather his producer, who called Heather Ludzack, owner of the Brick House Café & Catering and asked if she’d be interested in having her restaurant featured in Fieri’s popular cooking show, “Diners, Drive-Ins and Dives.”

Ludzack, a big fan of the show, couldn’t believe it.

“They picked us!” she said. “I didn’t get nominated. I didn’t submit myself. I didn’t even approach them.”

The process began in April with several long phone interviews, then graduated to numerous back and forth e-mails and some paperwork.

“I didn’t hear anything for a really long time, then around the June 15 they called and said, ‘We’re coming and here’s the days,’” she said.

The crew came Sunday, July 13 and Tuesday, July 15. They originally wanted to film the Delta Diner in Delta, but weren’t willing to make the long trip north for just one restaurant. So they double-scooped and sent a separate crew to film the Diner on Tuesday and Wednesday.

“Diners, Drive-Ins and Dives” started out as a ten-episode series in 2006. With a sudden rise to fame (in the midst of a foodie revolution), it’s the top-rated Food Network show, now in its eighth year.

Anything with Fieri’s name on it seems to get gobbled up instantly. The crew used to be able to film off-the-beaten-path eateries, but since the show’s gained popularity, they film wherever Fieri, a national icon, can be found. He makes numerous appearances these days at special events (conventions and conferences), in large cities throughout the United States.

Why did he choose the Brick House? The unique menu, the red-brick charm, the small town atmosphere? It was all of these, plus the fact Fieri has a good friend with a cabin in these northwoods. He needed some R & R. But before he could dip his fishing pole into a calm-inducing lake, he had two shows to film.

“I think people would be very surprised at how much work and background goes into producing a very short segment,” Ludzack said. “Each segment for the show is about 10 minutes, tops. Maybe 15.”

Mind you, this isn’t a Hollywood production with fancy gowns and make-up. It’s a food show, which means measuring cups, and aprons getting dirty, oil splattering everywhere. The only requirement for the actors (Ludzack and her invited dinner guests) was to wear the same clothes on both days.

“They made it real clear on Sunday, ‘Now don’t go out and get your hair and nails done. Don’t do anything different,’” said Ludzack, who explained they needed continuity between the two days. “Basically the first day they come in and get you all ready and take the small shots.”

These included chopping and mincing onions and garlic; putting it in the pan; turning the pan on; letting it sauté for 10 minutes; then adding the catsup, the vinegar, the coffee — a secret ingredient for one of Ludzack’s most popular dishes: her Espresso Barbeque Pull Pork Sandwich. The meat cooks eight hours, then sits overnight, so obviously they had to do some preparation before Fieri narrated on the second day.

On Sunday (from 7 a.m. - 9 p.m.) they ran through the making of all three dishes that Fieri chose, the other two being Crème Brulee French Toast and Lake Owen Panini, and shot numerous different angles.

“They filmed you running your kitchen, making orders with your staff. They filmed your waitresses bringing food to the table,” said Ludzack who had to close the restaurant and hand-pick some special customers.

“Then they take all this footage and start piecing it together to make the segment,” Ludzack said.

“When Guy comes, you run through all your dishes again, and that’s it. It’s me and him cooking together,” Ludzack said.

Minus the long simmers and overnight marinades, of course, plus some amusing banter and foodie talk.

Food has become something different in the United States since the days of meat and potatoes. Anthony Bourdain, a well-known chef and author of “Kitchen Confidential,” commented in the July/August issue of The Smithsonian on why food has become such a national obsession:

“There are huge populations of people who move from the country to the city who, for them, I guess the Food Network is nesting. It’s evoking a family life, a kitchen table that they probably never had, or maybe only had briefly,” he said,

The Brick House invokes just such an atmosphere. Maybe that’s why it also experienced a sudden rise to fame.

“I opened in 2005 and just wanted to do something different and unique for the area,” said Ludzack who at the time offered just catering. “But it really grew fast and the restaurant became a lot more successful than we thought it would be. We were just going to do a little, tiny sandwich shop — deli sandwiches, keep it simple — but it just grew, out of necessity, I guess.”

The question is, what will happen after her restaurant appears on national television?

“They actually have a sort of a counseling program; not really, but they gave me a list of former featured-restaurants to call to talk to about what to expect, what it’s going to be like, how to prepare for it,” Ludzack said.

The crew was very happy with the results and had a great time. They said it was one of the most enjoyable shoots they’d ever had, mostly because their schedules have grown so tight.

“But he (Fieri) really wanted to come up here and spend some time,” Ludzack said. “A lot of the places they go to in the cities are already huge and busy — not a little unknown kind of place,” Ludzack said.

The episode revealing this “little unknown kind of a place” will air sometime in the next three to nine months.

“They’ll give us a month’s notice. As soon as we have more information, we’ll probably have a big launch party, like a viewing party, maybe at the Drummond School — do it on the big projector. We’ll do something special and make sure we announce it.”

James Bolen from the Cable Chamber of Commerce said he overheard Ludzack’s husband, Larry, ask Fieri a few questions before the star took off in his red Camero.

“If it really wasn’t that good would you tell us?” Bolen recalled. “He looked right at Larry and his eyes got really big and he said, ‘Yeah, I really don’t have time for that. I’m pretty straight forward. I’d tell you if it was bad. She’s incredible.’”

That she is. This wasn’t her first time on camera either. She’s been on Discover Wisconsin too.

“Working with the Food Network crew was fantastic,” he said, “really great people. I feel like we made some nice personal connections that will last beyond the filming of the show. Should be great exposure for the area in general, and the specific businesses featured.”

To find out more about The Brick House Café, including airing dates, go to: http://www.thebrickhousecafe.net/ or https://www.facebook.com/pages/Wine-Thyme-with-The-Brickhouse-Cafe-Catering/312511325448027.