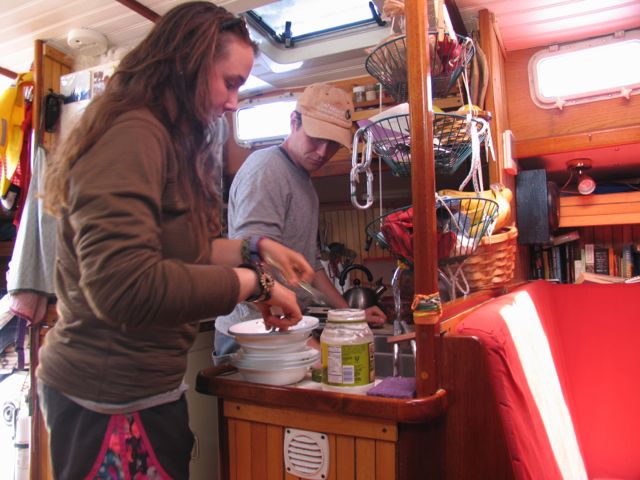 Three Northland College students have been spending May term on board the Amicus II both as students and crew members. From left, Devon Brock-Mongomery and Jake Schultz. 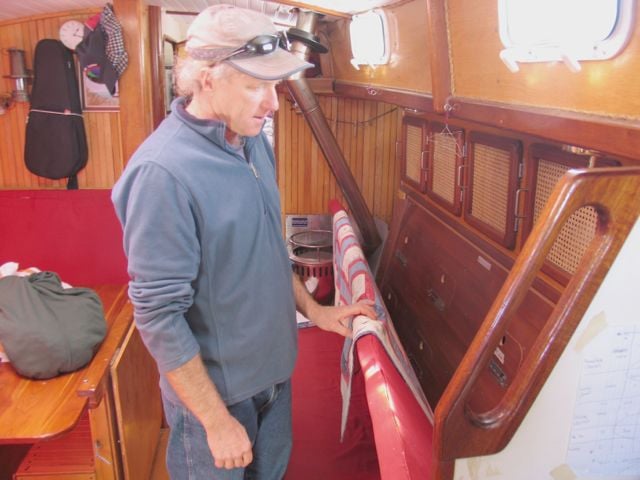 Everything has its place on board the Amicus II which houses eight people. Mark Gordon is showing one of the numerous storage places. 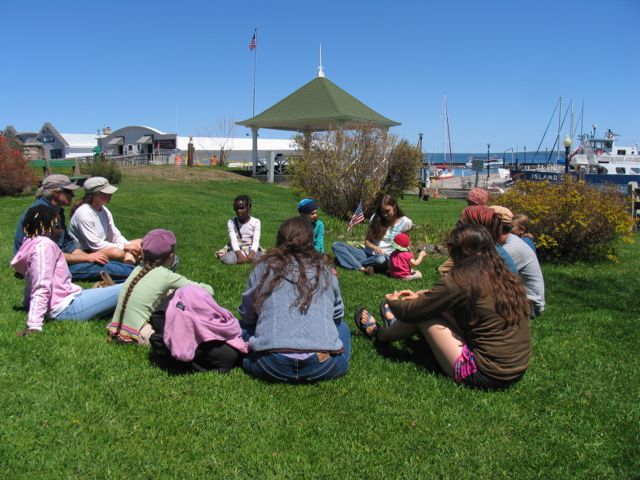 A homeschooling group met with the Gordons on the lawn at Memorial Park in Bayfield. 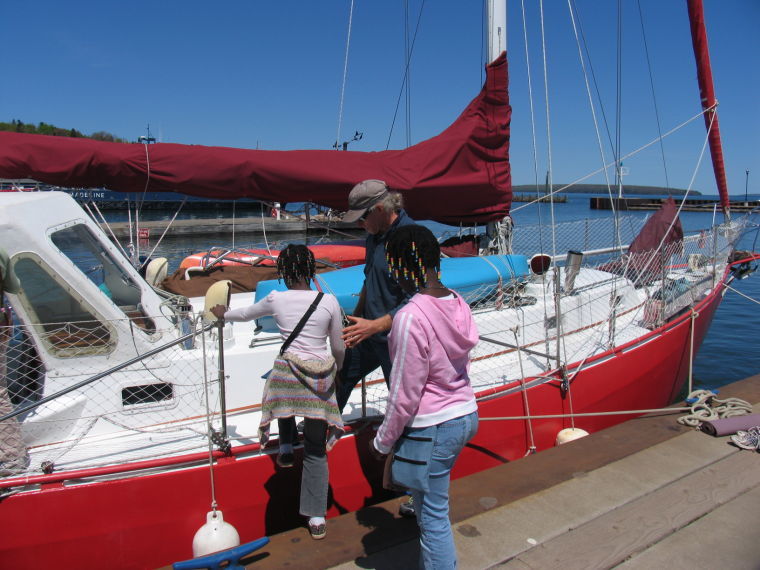 Photo by Hope McLeod
1 of 4

Three Northland College students have been spending May term on board the Amicus II both as students and crew members. From left, Devon Brock-Mongomery and Jake Schultz.

Everything has its place on board the Amicus II which houses eight people. Mark Gordon is showing one of the numerous storage places.

A homeschooling group met with the Gordons on the lawn at Memorial Park in Bayfield.

BAYFIELD — Last week a little red sailboat cruised into Bayfield with an unusual family on board: Mark, Katya, Cedar (11), and Lamar (9) Gordon. The Gordons have been living and cruising on sailboats for the last decade. Currently they’re on a five-week mission voyaging the south and west portions of Lake Superior while sharing information about climate change.

Cedar and Lamar are home-schooled and their parents own and operate Amicus Adventure Sailing out of Knife River, Minn. Since 2010 the Gordons have led numerous adventures for families and young adults, including trips to the Bahamas and several voyages on Lake Superior. The current trip, which brought them to Bayfield, includes three crew members: Devon Brock-Montgomery, Jake Schultz and Julia Fair, all Northland College students participating in May term.

“This trip is entitled ‘Sea Change’ — both to highlight what effects climate change has already brought to our ‘sea’ and to foretell the cultural shift taking place to deal with the urgent issue of climate change,” said Katya, who pre-arranged a series of speaking engagements along their route which has included Knife River, (where they set sail on May 9), Grand Marais, Houghton, Mich., Bayfield, and Isle Royale. Unfortunately they had to cancel Marquette due to thick ice in that area.

The Gordons have literally bumped into climate change on their various journeys. As they entered the Apostles Islands National Lakeshore (AINL) on May 25, Katya said, “It had the same tropical feel that it always does, despite the ice chunks floating around.”

Ice growlers dotted the channel and at one point they stopped, put out the kayak, and took turns kayaking around it.

“Mark even paddled up onto it and walked around,” she said. “The ice reminded me of the Arctic—it looked old, all different shades of color, all different patterns, and deep (some of them ten feet)... No wonder they were taking so long to melt.”

Indeed they were/are. On Memorial Day weekend visitors hopped onto these aberrant remnants of winter as if they were flotillas in a Mardi Gras parade. The Gordon’s boat, Amicus II, pushed through the parade.

Amicus II is a 40-foot steel sailboat that houses eight people. It’s completely energy independent with a composting toilet, a 200-watt solar panel, a wind generator, and inside and outside water. It has a 100-gallon tank for fresh water and a pump for washing dishes with “outside” or lake water. The Gordons recycle everything, which includes giving away compost at every port.

“What amazes me about this trip is how generous people are,” Katya said. “When you put yourself out there, people just give and give.”

As of May 29, they’ve received 27 cartons of donated eggs, tons of beans, cheese, and bread.

Months ago Katya contacted libraries, schools and various organizations to interest them in a speaking engagement. The events have been highly successful.

“Seventy-five homeschooling family members showed up in Houghton. I’d like to get the public schools involved too, but so far it’s the homeschoolers who’ve responded,” Katya said.

Several different homeschooling groups met with the Gordons in Bayfield.

“Weather is what happens every day, and climate is what happens over a long period of time,” said Katya to students gathered on the lawn at Memorial Park on May 28. “How many seasons are there?”

“The length of those seasons are changing, however,” Katya added.

The Gordons have researched their subject thoroughly and conferred with top scientists on climate change. Before leaving their home in Two Harbors, the Gordons were given copies of the book, “Climate Change in the Great Lakes Region: Starting a Public Discussion,” by Stephen Wittman, which they’ve handed out to people on the trip. They were donated by the University of Wisconsin Sea Grant Institute, an organization that’s been instrumental in educating the Gordons.

When the Gordons first started studying climate change, the problems seemed insurmountable. But after dialoguing with other communities, they’ve grown more optimistic.

“There’s a momentum building — the science isn’t going to go away. We’re going to continue to get more science-related climate change. It’s going to be more and more apparent to everyone. There’ll come a point when you just can’t deny that it’s happening,” Mark said.

According to Katya, three things need to happen in order to impact climate change. The first one is a shift in consciousness.

“These are all the things people do on a daily basis to reduce one’s carbon footprint,” she said.

The second is raising the collective voice.

“Even churches are beginning to come together and speak out on climate change,” she said.

The third is legislation.

“Our laws need to reflect our values and the true price of carbon,” she said.

The Gordons love what they’re doing. In ‘09 Mark quit his day job as manager of a wilderness therapy program. Since then the family has let their “priorities drive their lifestyle” versus their “lifestyle drive their priorities.” It’s been very rewarding, especially when groups like AINL get involved. AINL hosted a speaking engagement with the Gordons which 30 people attended on May 27.

“It’s been indescribably satisfying to find our program so warmly received and encouraged not only by people who are concerned about climate change but by the ‘experts’—scientists, park service employees, and others whose personable friendliness and out-and-out admiration of what we’re doing has both affirmed and inspired our course at every stop,” Katya said.

Ironically the air-conditioner stopped running during their presentation at AINL and audience members were sweltering. Katya forgave her hosts because she knows they make a concerted effort to maintain a low carbon footprint, a strong message the Gordons are delivering.

Having the Northland College students on the trip has been really amazing, Katya said. They’re learning from each other. Brock-Montgomery brings her knowledge of limnology, (the study of lakes); Fair, her skills in sociology and social justice with an emphasis on community development; Schultz, his passion for aquaponics. They all know that climate change affects everyone.

“Our atmosphere is a global commons — something held and shared by everyone on Earth,” said Wittman in his book.

There’s an urgency to the work the Gordons have taken on, but also a deep joy.

“One thing we’ve learned from our program is we really need to get past the problem,” Mark said. “It’s overwhelming. People’s eyes glaze over; our eyes glaze over. What we need to talk about are solutions.”

Amicus II left Bayfield on May 29 and headed for Isle Royale, but they’ll be back, no doubt, with more wind in their sails.

Note: Katya is author of “Big Waves, Small Boat, Two Kids,” a book about the Gordons’ adventures to the Bahamas.