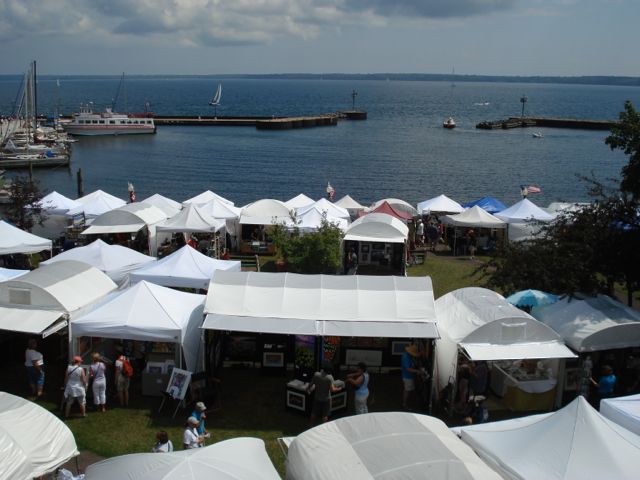 Fifty artist vendors will be pitching their white tents on the Memorial Park lawn the weekend of July 19-20. 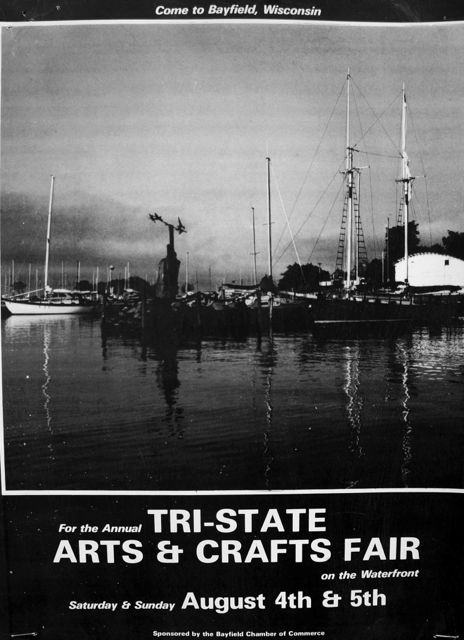 The Tri-State Arts & Craft Fair, predecessor to the Festival of Arts, started in 1962. This poster was from 1967.

Fifty artist vendors will be pitching their white tents on the Memorial Park lawn the weekend of July 19-20.

The Tri-State Arts & Craft Fair, predecessor to the Festival of Arts, started in 1962. This poster was from 1967.

BAYFIELD — July 19-20 marks the 52nd annual Festival of Arts in Bayfield. Besides 50 artist vendors pitching their white tents on the Memorial Park lawn, the Chequamegon Bay Arts Council (CBAC) will kick off the weekend with its 13th annual fundraising event, Art on the Bay, starting 5:30 p.m., Friday, July 18 at the Bayfield Pavilion. Enticements at the fundraiser include a full bar and fine foods featuring 15 local restaurants; dancing and drumming by Humble Be; a silent auction including gift certificates, a sailboat ride, local foods, works of art, and jewelry. And new this year, one lucky soul will win a raffle basket filled with wine, chocolate and other goodies.

The ticket price for Art on the Bay is $25 in advance, $30 at the door. Proceeds support CBAC’s annual student scholarships and artist grants.

A triple-crowned weekend, fair visitors can also take the gallery tour of local shops and studios on Saturday and Sunday. Artists will open their houses and give demonstrations to the public (as well special discounts). Maps will be available at the festival and the Bayfield Chamber of Commerce and Visitor Bureau.

The Chamber has been hosting the festival for many years.

“We are refining the focus of the Festival of Arts, starting this year,” said Kelley Linehan, Marketing and Events Manager. “We have given it a more fine art and craft character. We were very selective in the jury process and only admitted visual arts — no food or body products this year.”

The intention is to elevate the quality of the art presented.

“We do have returning artists, particularly four of 2013’s Best in Show: Tim Brudnicki of Eau Claire Woodworks; Julie Crabtree of Bratach Sith Studio; Betsy Harries of Sweet Grass Trading Company, and Emily Gray Koehler, and also many new ones.”

And of course several local artists are participating as well, like Lissa Flemming of Silverwaves Jewelry. Flemming has also helped “to refine the overall process of the festival this year,” Linehan said.

A new artist has joined the ranks, Cathy Lange, a painter and photographer from Washburn who also serves on the CBAC board. Lange has a graphic design business and handles both the CBAC newsletter as well as their promotional materials. This winter Lange captured some breathtaking photographs of the ice caves, which she’ll be selling at the fair — both framed and as note cards.

As far as food goes, “There will be two food vendors on location to provide snacks to the festival-goers, but they are not considered part of the show,” Linehan said.

Deanna (Dede) Eckels of Eckels Pottery and Fine Craft Gallery is one of the artists who’ll be opening her studio to the public on the gallery tour. She and husband Pete are hosting their annual Raku Weekend. More a workshop than a demonstration, visitors select their own pot and learn how to glaze and fire it using this ancient and lustrous finishing-technique.

Dede has been participating in the arts fair one way or another since she was a toddler. Her father, Robert (Bob), was one of the principle organizers for the festival which started in 1962 and was called the Tri-State Arts & Craft Fair. A pillar of the arts community, Bob built and opened Eckels Pottery with his friend Glenn Nelson in ‘61 and also started the art department at Northland College where he introduced pottery to the region. He also introduced pottery to his four children, and it wasn’t long before his youngest daughter took this matter into her own hands.

“Hilda Reynolds’ daughter, Renee and I would set up a table outside the pavilion and sell our little pots for $2-3 at the art fair,” Dede said. “We thought we were making a million!  $30 at the end of the day was a windfall. It made me hungry for more.”

Dede recalled a letter published in the Bayfield County Press in ‘67 which described the Tri-State Art Fair, sponsored by the Press that year: “A gallery will be set up in the pavilion and also displayed in the waterfront park…Tourists will be able to mingle with the artists and watch them work. It gives Bayfield an opportunity to add culture to its long list of vacation lures.”

The fair ran from July 25–27 that year. The majority of the artists were local, yet some traveled from Minnesota and Michigan too. The article said the original planners included, “Robert Eckels, arts professor at Northland College and developer of the Wisconsin Craftsman Association, a non profit organization sponsored by the University of Wisconsin; James Gibeau, editor of the Bayfield newspaper; Reverend and Mrs. Gilbert Larson, Fond du Lac master photographer; Mr. and Mrs Art Bloomquist, Ashland artists and art shop owners; and John Black, Bayfield artist. The entry fee is $2.00.”

Denise Koch, a painter from Bayfield who had a booth in‘64 said, “It took place in the pavilion and there were about 50 artists. We didn’t make a lot of money, but we sure had fun. Our displays were makeshift, no pop-ups. Mine was an A-frame made out of baby gates.”

She also said most people drove station wagons, because vans weren’t invented yet. Some camped out at the campground while others slept at the foot of their displays. It wasn’t until ‘67 that the event moved out onto the lawn.

Still gypsies at heart, the artists and artisans of 2014 may not sleep at the foot of their displays anymore, but they do caravan from fair to fair this time of year, pitching their white tents that look like sailboats on the bay. Unfortunately a few years ago some of these sailboats actually landed in Lake Superior when a tornado-like gust of wind whipped through Bayfield and upended several tents and destroyed the contents therein. Hopefully this will never happen again.

Join the festivities July 18-20 and meet some of these artists as they sail through town.

To find out more about the festival go to: www. bayfield.org.

Art on the Bay

A fund-raising kick off for the Bayfield Festival of Arts, July 19-20