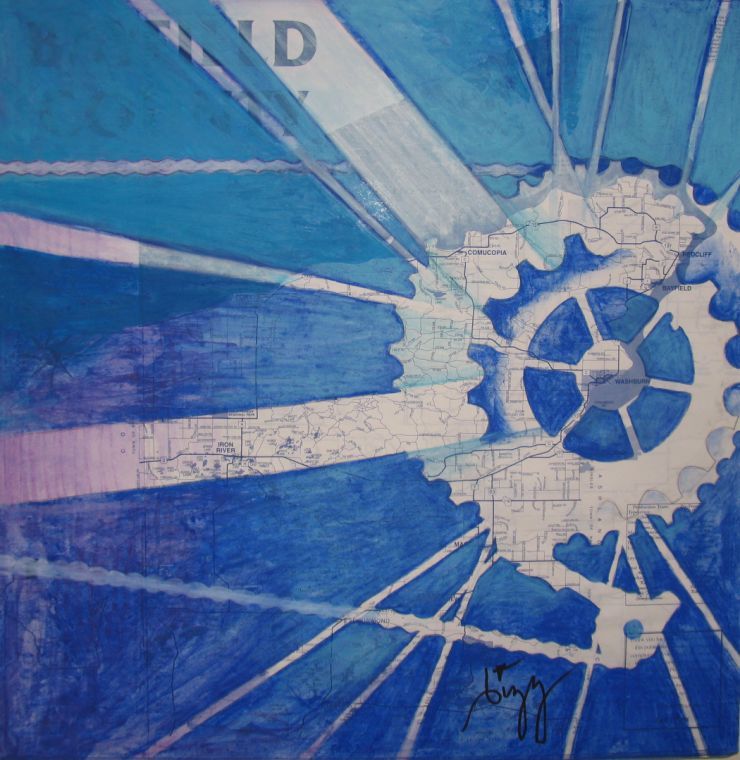 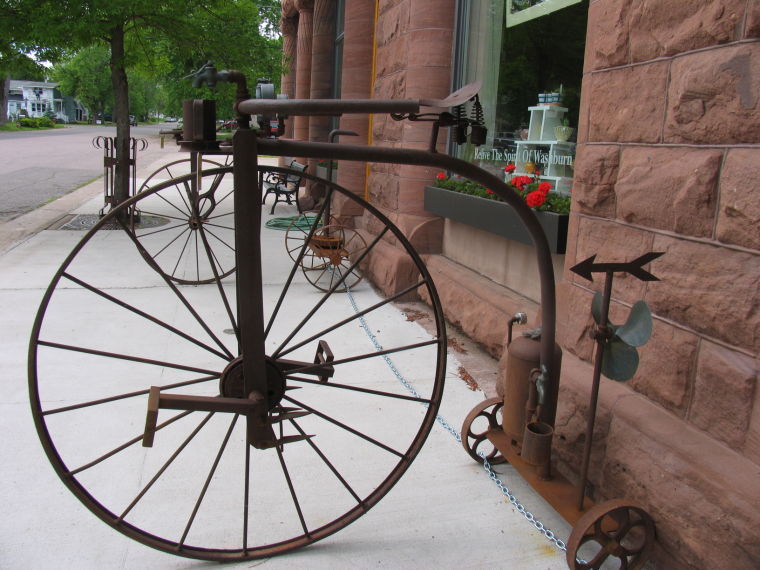 A bicycle sculpture by artist/welder, Jon Vander Bloomen currently in front of the Washburn Cultural Center as part of the bicycle themed art exhibit on the third floor of the Cultural Center. 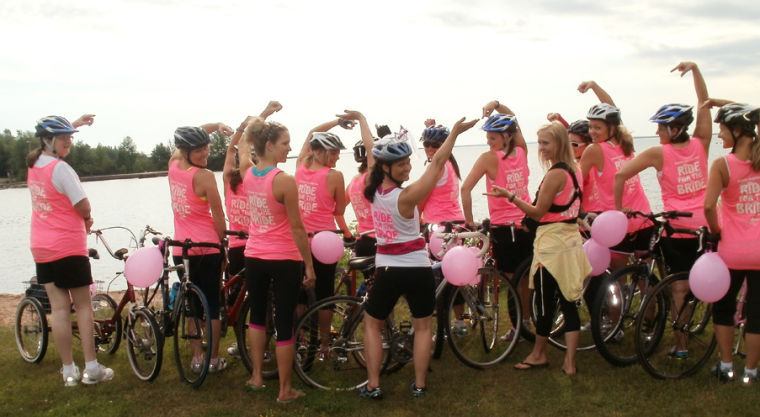 Superior Vista Tour 2012 with a bunch of ladies who called themselves Ride for the Bride.

Joe Groshek, organizer for the Superior Vista Bike Tour, found and painted an old bike (above) as a colorful marketing tour for the 10th annual event, which will take place this Saturday, June 28.

A bicycle sculpture by artist/welder, Jon Vander Bloomen currently in front of the Washburn Cultural Center as part of the bicycle themed art exhibit on the third floor of the Cultural Center.

Superior Vista Tour 2012 with a bunch of ladies who called themselves Ride for the Bride.

WASHBURN — Bicyclists are gearing up for the 10th annual Superior Vista Bike Tour (SVBT) on June 28. One hundred and fifty miles of roadways with seven different routes over hill and dale attract hundreds of people from all over the United States. One couple comes from St. Louis, Mo. every year. Why? Besides being spectacular vistas, the food’s great at the rest stops (local, fresh and homemade); the people are friendly (80 volunteers working to make it a smooth and safe ride); and the color-coded maps and directional signage on the way make it nearly impossible to get lost.

“We’re still going strong — getting bigger and better every year,” said Joe Groshek, one of the organizers for SVBT.

One way that SVBT has grown is they’re expecting 400- 500 participants this year, up from 200 in 2004. Also, organizers have really put their money where their mouths are, literally. Committed to supporting the sustainability goals of Chequamegon Bay’s eco-municipalities, SVBT has become a certified Travel Green Wisconsin event. What that means is whenever possible they incorporate the use of recycled, bio-degradable, organic,  GMO-free, non-toxic, and/or recyclable materials.

But that doesn’t mean it’s a throw-away event.

The promoters are saying, “It’s a ride, not a race,” something for all ages and skill levels. The loops run 13, 19, 34, 40, 52, 70, and 100 miles with spectacular views of Lake Superior from onshore (Cornucopia) or from hilltop vistas (Nevers Road). Incidentally, when riders reach Nevers Road they get one free ice cream bar at Tetzners Dairy, but if they forget to stop or just want to keep going until they reach the bottom of the hill, ice cream will be waiting for them there too.

“We’re really focusing on good quality food to feed the cyclists,” said Groshek, who said he won’t mention names but some races he’s participated in just throw a few cheap bars on the table for the riders —  not so with SVBT.

For one thing, the Washburn Historical Society has been commissioned to bake 120 dozen cookies. Also, fresh fruit and quality peanut butter and jelly sandwiches on Coco’s homemade bread will be part of the deal as well. In addition, Hugo’s Pizza will serve fresh-out-of-the-oven pizza at the finnish of the tour.

“I’ve been on enough rides to know that food fuels the biker,” Groshek said.

The community in turn fuels the ride with their energy and commitment manning (and woman-ing) the fuel stops and offering other services along the way as well.

“In case riders have mechanical breakdowns, we’ve got vehicles (sag wagons) cruising all the routes to help fix a flat tire or brakes or whatever,” Groshek said. “If there’s a medical problem, they can address that too.”

On Friday three different teams will be putting up directional signs on all seven routes.

“Our goal is for folks to have a good time and be safe,” said Groshek, who’s not just a bike-event organizer and rabid bicyclist himself, but also one of eight artists who submitted original artwork in the bike-themed exhibit currently on display at the Washburn Cultural Center.

“The anchor of that art show is Jon Vander Bloomen’s metal sculptures outside the Cultural Center,” Groshek said.

Bloomen is an artist/welder from Ashland who calls himself a Fantastic Realist. He recycles interesting and unusual items he finds in steel salvage yards. He has two steel-wheeled bicycle creations displayed in front of the Cultural Center and will have another one at Thompson West End Park where the tour begins.

On Saturday SVBT’s going to take over the roadways of Chequamegon Bay, so watch out for these ice cream-chinned, pizza-stained riders lapping up goodies along the way and pumping their hearts out. Registration will be at Thompson West End Park in Washburn on June 28, 7-8 a.m. for the 70- and 100-mile loops, and 7- 9 a.m. for the others. Finish area food will be available until 4 p.m. Fees are $50 for an individual and $75 for a family. Students under 22 years of age are $30.

After paying for the goodies, the fees for this ride help support the Ashland Chamber of Commerce, Friends of Lake Superior Nordic trails, Washburn Cultural Center, and the Alliance for Sustainability. Supporters include Hugo’s Pizza, Washburn Hardware, Sport and U-Care, Memorial Medical Center, and the City of Washburn.

The promoters are saying, “It’s a ride, not a race,” something for all ages and skill levels. The loops run 13, 19, 34, 52, 70, and 100 miles with spectacular views of Lake Superior from onshore (Cornucopia) or from hilltop vistas (Nevers Road).