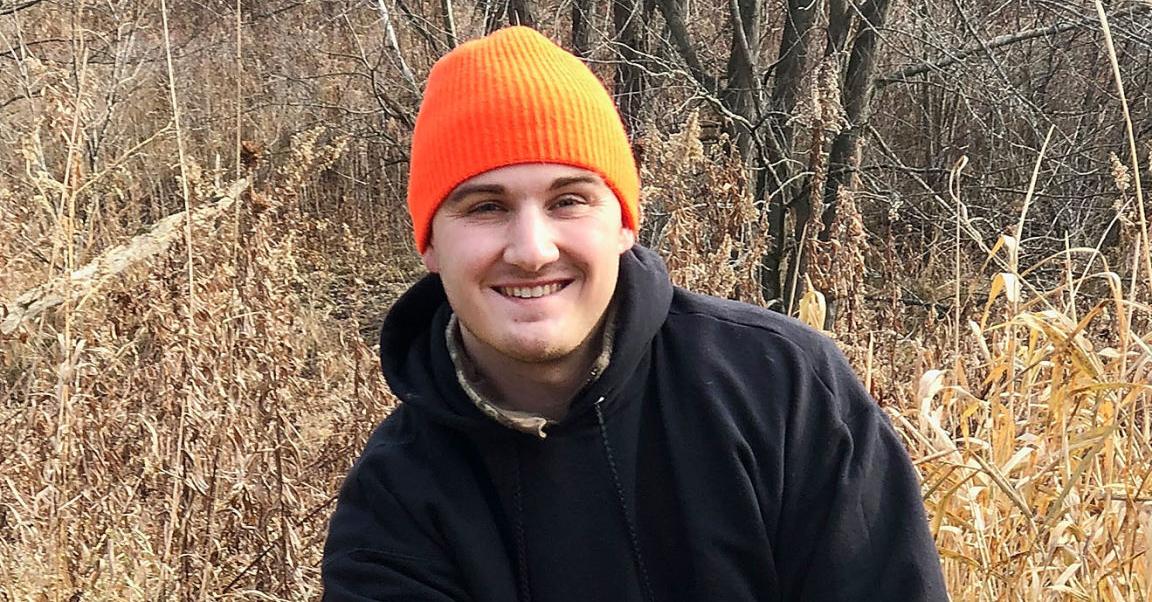 Dalton Roach, shown posing with a deer he shot two years ago, said the bear bite he suffered while hunting over the weekend in Trempealeau County won’t make him give up the pastime. 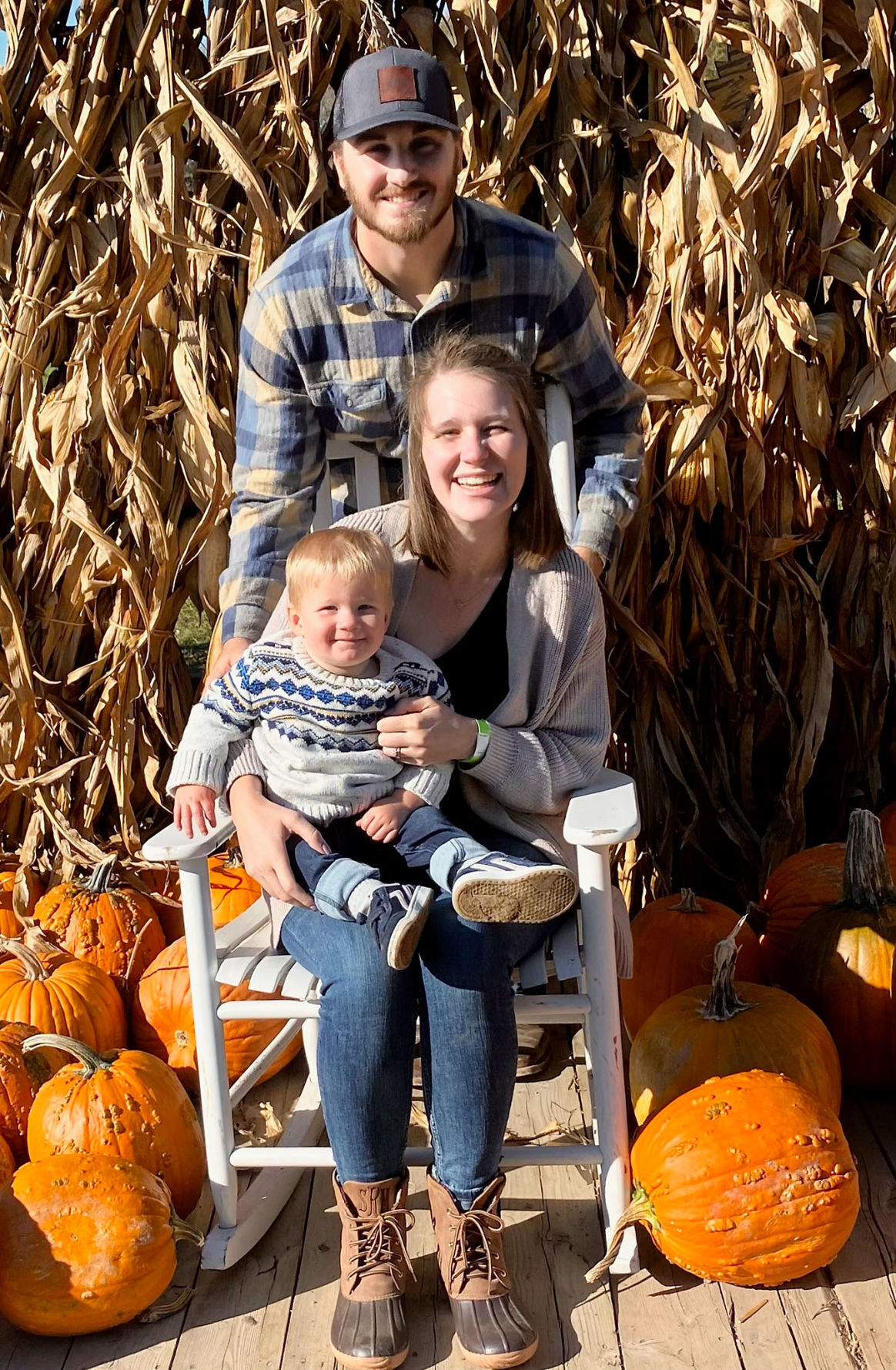 After being bitten by a bear while hunting Saturday in Trempealeau County, Dalton Roach of Eau Claire visited a local pumpkin patch Sunday with his wife, Sarah, and son, Wallie. 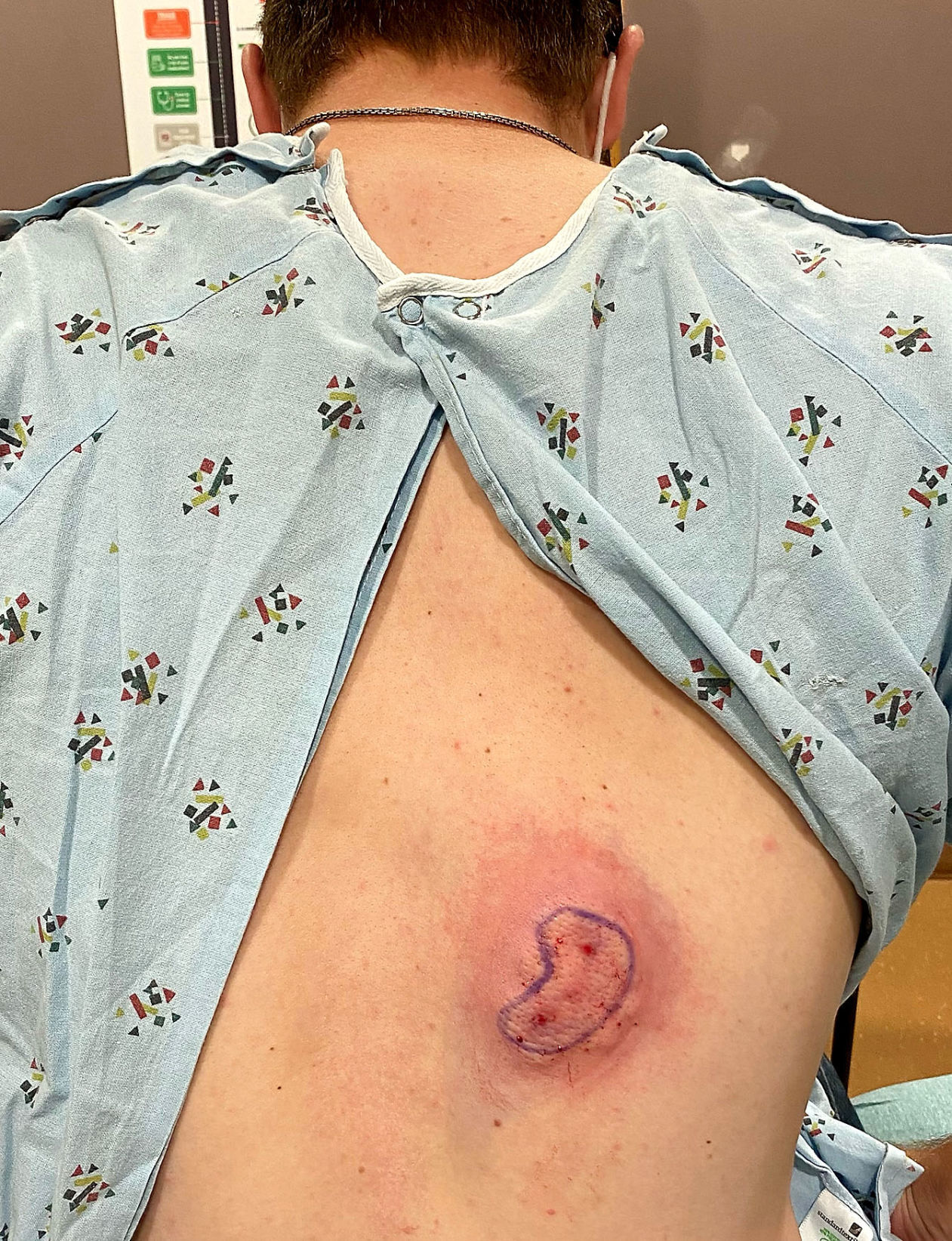 This photo shows the wound where Dalton Roach was bitten by a bear while hunting in Trempealeau County. He was given 22 rabies vaccine shots at Mayo Clinic Health System as a precaution. 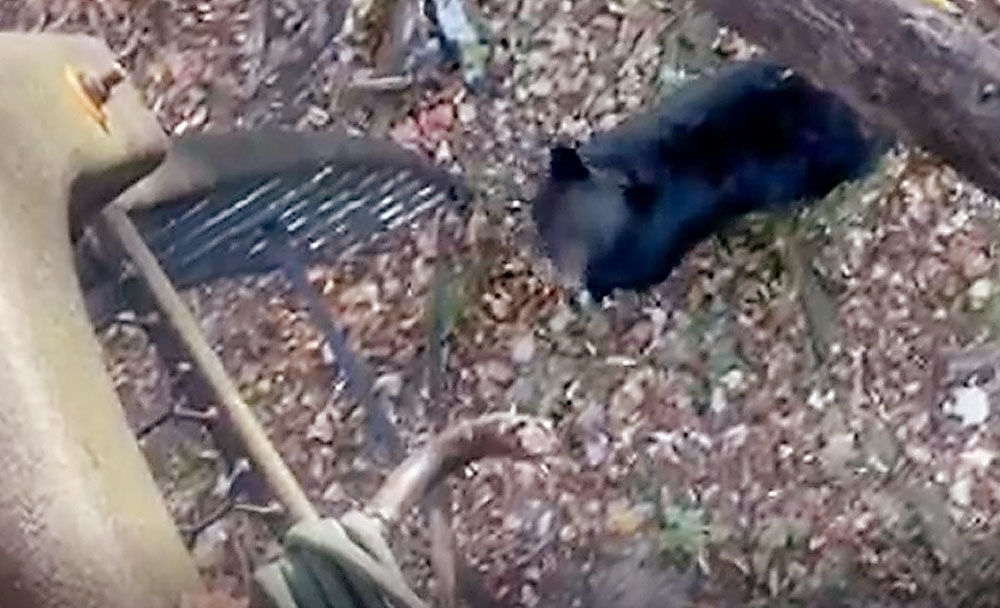 This image is taken from video Dalton Roach shot Saturday seconds before the bear climbed the tree toward him.

Dalton Roach, shown posing with a deer he shot two years ago, said the bear bite he suffered while hunting over the weekend in Trempealeau County won’t make him give up the pastime.

After being bitten by a bear while hunting Saturday in Trempealeau County, Dalton Roach of Eau Claire visited a local pumpkin patch Sunday with his wife, Sarah, and son, Wallie.

This photo shows the wound where Dalton Roach was bitten by a bear while hunting in Trempealeau County. He was given 22 rabies vaccine shots at Mayo Clinic Health System as a precaution.

This image is taken from video Dalton Roach shot Saturday seconds before the bear climbed the tree toward him.

EAU CLAIRE — An Eau Claire bow hunter was excited to get an up-close view of a black bear over the weekend — until the encounter got too close for comfort.

The Saturday-evening incident began innocently enough with Dalton Roach, 25, watching as the bear meandered around the Trempealeau County woods where he was deer hunting.

Perched in a tree stand nearly 20 feet off the ground, Roach took cellphone video to document his first wild bear encounter from what he thought was a safe vantage point.

“He was just kind of moseying around. He didn’t look like he was on any kind of a mission or anything,” Roach recalled Monday. “But when he got to about 20 yards away, he took a left turn and came directly under my tree.”

At that point, Roach, a 2014 Memorial High School graduate who plays professional baseball for the St. Louis Cardinals’ Double-A affiliate in Springfield, Missouri, stopped filming and started pondering his options.

That’s when he heard a scratching noise and realized, to his horror, that the bear was climbing the tree directly toward him.

“The next thing I know I can hear him right behind me and feel him breathing on my back,” said Roach, who was sitting on a 4-square-foot platform.

“Then I feel a paw on my lap. He just kind of left the paw sitting there, so it’s not like I wanted to make a big move and make him squeeze.”

When Roach felt the camouflage gear covering his back tightening, he realized the bear was biting him and decided it was time to take action.

“Right when I thought this might be it, I decided I wasn’t going to just go out and it was better to at least try to do something to get out of this situation,” Roach said, explaining that he elected to spin, with his elbows wide to clear some space, so he was facing the creature he estimated at 250 to 300 pounds.

Hoping that what he’d always heard was true — that black bears aren’t usually aggressive and are more afraid of people than people are of bears — Roach made himself as big as he could and started hollering like his life depended on it, which may well have been the case. The bear, one of an estimated 24,000 in Wisconsin, backed down.

“Luckily, he kind of leaned back, seemed to say, ‘What the heck,’ and eventually got out of the tree,” Roach said, noting that it was important that he had a safety harness connected to the tree so he didn’t have to worry about falling out of the stand and confronting a bear at the same time.

As the bear circled the base of the tree, Roach phoned a friend and kept him on speaker phone in his pocket. Roach briefed his buddy on the situation and asked him to drive his truck toward the tree stand if he heard Roach yelling.

Roach relaxed a bit when the bear started to walk away, but then it stopped about 15 yards away, peered back at Roach and snapped some maple saplings to get a better look.

“He didn’t look like he was coming back, but I was still uncomfortable because he was looking at me a little too intently and had just been up in the tree gnawing on me,” Roach said, explaining why he readied his bow in case the bear came back for seconds.

Fortunately, the bear had had enough and finally wandered off — in the opposite direction from where Roach’s truck was parked about a third of a mile away.

Once the bear was out of sight at around 5:30 p.m., Roach unhooked his safety harness, climbed down and headed for his vehicle, as he was in no mood to wait until dark.

“I think I still had so much adrenaline pumping that there wasn’t tons of pain going on and I could tell there wasn’t a lot of blood dripping,” he said.

Still, after consulting with his wife, Sarah, Roach decided it would be wise to have his wound checked out at Mayo Clinic Health System’s emergency department, where staff cleaned the bite with saline, prescribed antibiotics and gave him a fresh tetanus shot along with the first injections of the rabies vaccine regimen he must continue for the next couple of weeks.

As of Monday, Roach reported the puncture marks, located about midway down the right side of his back, were still a little tender but not particularly painful unless he put pressure on them.

“I’m pretty fortunate that it’s not some big nasty bite that took off half my back and that I’m still here and able to talk about it today,” said Roach, who believes the bear that bit him was more curious than furious and may not even have known he was in the tree before deciding to climb it.

Roach, who has hunted on the same family-owned land many times, had never seen a bear there and wasn’t particularly worried about the prospect even though he knew bears occasionally had been spotted by trail cameras in the area.

“I never felt a need to carry a sidearm or bear spray or anything like that,” said Roach, who may reconsider that choice in the future but vowed not to let the incident dissuade him from hunting.

“I still plan to hunt like usual,” he said. “I honestly am not scared of heading back into the woods at all. It was a super rare situation and I am just happy to have made it out OK. But I am still excited to get back into the woods.”

“I continue to be amazed by my husband’s ability to think quickly and stay calm under pressure, both on the ball field and in the woods, and am incredibly grateful that he was able to survive a literal black bear hug and walk away with only a minor bite and 22 rabies shots,” she said. “I also can’t wait for him to get back in the stand and fill our freezer with meat — Dalton is very good at providing for his tribe.”

During the encounter, Dalton Roach was focused on getting out of the situation, but afterward he acknowledged that the idea crossed his mind that if the bear had been in a more aggressive mood he might not still be looking forward to pursuing his dreams of playing Major League baseball and living happily ever after with his wife and 15-month-old son.

As it is, the former Minnesota State University-Mankato and Eau Claire Express pitcher vowed the injury would have no impact on his training or his baseball career.

“I’m very fortunate that this whole scenario went the way it did,” Roach said, “and now I have a heck of a story to tell.”

Thankfully, his scary story has a happy ending.

The Wisconsin Department of Natural Resources says bears generally are afraid of people and will avoid confrontation. However, bears will be defensive when protecting their young or a food source and can become agitated if startled. The agency offers these tips for people who encounter a bear that is acting aggressively:

• Talk to the bear or start shouting if it doesn’t leave.

• Raise arms above your head and wave at them to appear larger than you are.

• Do not run. Slowly back away and don’t turn your back on the bear.

• Always leave an escape route for the bear.

• Do not lie down or play dead. Fight back if attacked.