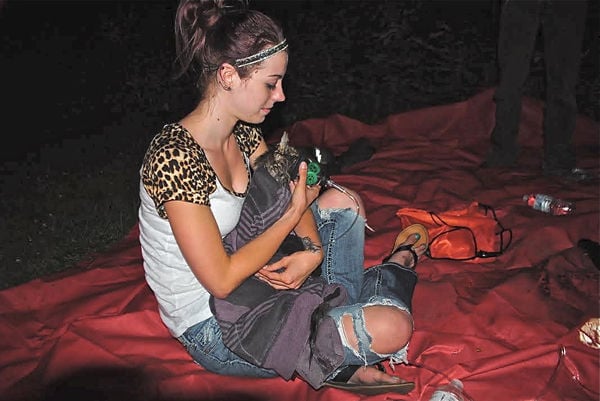 Ashley Doleys, a family friend of Lori Huting, holds Huting’s pet cat “Lilly” and administers oxygen using a pet oxygen mask recently purchased by the Ashland Fire Department. Without the supplemental oxygen, Ashland fire fighters said that Lilly would have likely perished from smoke inhalation in a fire that severely damaged the Huting residence early Sunday morning. Lilly has been released from an area animal hospital and continues to recover. 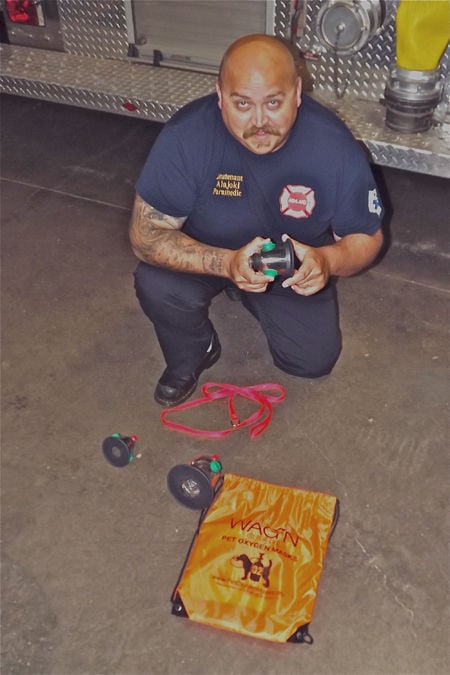 City of Ashland Fire Department Lieutenant Kevin Alajoki holds one of the “Wag’N O2 Fur Life” masks from the pet oxygen mask kit recently purchased by the Ashland Fire Department. The kit, which cost $90 has already saved the life of one beloved pet, and will be on hand for any future fires where pets may need emergency assistance.

Ashley Doleys, a family friend of Lori Huting, holds Huting’s pet cat “Lilly” and administers oxygen using a pet oxygen mask recently purchased by the Ashland Fire Department. Without the supplemental oxygen, Ashland fire fighters said that Lilly would have likely perished from smoke inhalation in a fire that severely damaged the Huting residence early Sunday morning. Lilly has been released from an area animal hospital and continues to recover.

City of Ashland Fire Department Lieutenant Kevin Alajoki holds one of the “Wag’N O2 Fur Life” masks from the pet oxygen mask kit recently purchased by the Ashland Fire Department. The kit, which cost $90 has already saved the life of one beloved pet, and will be on hand for any future fires where pets may need emergency assistance.

For many pet owners, their beloved cats and dogs are members of the family, often as important as their own children.

Many firefighters will tell you that when they rescue people from fires, often their first thought is not for their own safety, it’s for their pets.

While virtually all fire-fighting units carry emergency equipment designed to save human life, not that many departments have provisions for pets

Until recently that was the case for the Ashland Fire Department, until Ashland Fire Captain Scott Thimm saw a news story about a year ago concerning the Duluth Fire Department equipping its units with oxygen masts that could be attached to the standard fittings used for human oxygen tanks.

Called the “Wag’N O2 Fur Life” oxygen mask, the kits sell for $90 and include three masks, tubing and other essentials in a handy carry bag. The kits are designed to work on dogs, cats, ferrets, rabbits, guinea Pigs, birds, and many other critters.

“I looked at it and it occurred to me that one day we would have the opportunity to look at something like that,” said Thimm.

Every firefighter has seen the grief and sorrow that comes when they bring out a pet from a fire that they were not able to save because they didn’t have the proper equipment. That was something Thimm thought they could do something about.

“Pets are part of the family. Once the people are out and you can save a pet, that is a huge thing for them.

Even though any kind of spending is looked at closely at the Fire Department, this was one expenditure that was a no-brainer.

Thus the Department had the pet oxygen mask kit hanging in the cab of their fire engine when the fire broke out at the Lori Huting residence at 3604 Fourth Avenue East.

Thimm said there is no question that having the mask available saved the life of Lily, the grey tabby cat who was found unconscious on the floor of the second story.

When fire fighters arrived, they found an Ashland Police officer leading Huting out with Benji, one of two dogs at the residence. The second dog, Sadie, was soon found and given supplemental oxygen from the pet oxygen mask.

The cat rescue proved to be more difficult. She was not found until firefighters reached the second floor to fight the fire. Close behind them was Thimm.

“They told me not to step on the cat,” he said. Looking down he saw the animal, it’s fur covered with firefighting foam and gasping for breath in what is known as “agonal respiration” — irregular gasping for breath that indicates that death may be near. He quickly scooped up the unresponsive cat and took it back downstairs, out of the hose and passed it off to AFD Lieutenant Kevin Alajoki who began emergency resuscitation.

“As I was walking it across the street, it stopped breathing,” he said. So I squeezed its chest four times, got to the tarp, laid it down and got on my hands and knees and give it five more chest compressions. Still nothing. I gave it five more and all of a sudden the cat took a deep breath, and that's when we put the mask on.”

The cat would take a breath every 10 or 12 seconds, far less than its normal respiration of 20 to 30 breaths a minute.

“We just gave it a few more chest squeezes, and then it started getting mad,” he said.

After a short time, Alajoki was able to hand the cat off to a family friend, Ashley Doleys, who continued holding the cat with the oxygen mask for about an hour until arrangements could be made to transport it to an area veterinarian.

Meanwhile, Huting had no idea how her pet was faring, as she was in an ambulance being evaluated for possible smoke inhalation.

“I was pretty stressed out about it,” she said. “I was hysterical because my cat was still in the house.”

Huting has a special relationship with Lily.

“I got her just after I had back surgery in 2006. She’s very special to me,” Hutting said. “I am so blessed, I am so grateful that they had that type of mask to save her. She is my life, she is like one of my children.”

“She is basically my cat; she comes to me most times over any other family member,” she said.

Once Huting was informed that her cat had made it out of the fire and was breathing again, Huting sad she was “so relieved and happy.”

From Huting’s perspective, the decision to buy the pet oxygen masks was one of the best bargains that department ever made.

“I would be happy to buy another one for them if they need it,” she said. “There is no such thing as ‘only a cat’ or ‘only a dog’ in my vocabulary. I love animals and I love her dearly, and I was very sickened that she might not make it.”

Huting said the veterinarian told her that Lily might have suffered lasting lung damage from the smoke inhalation.

“But she’s alive, due to the fire department and this mask.