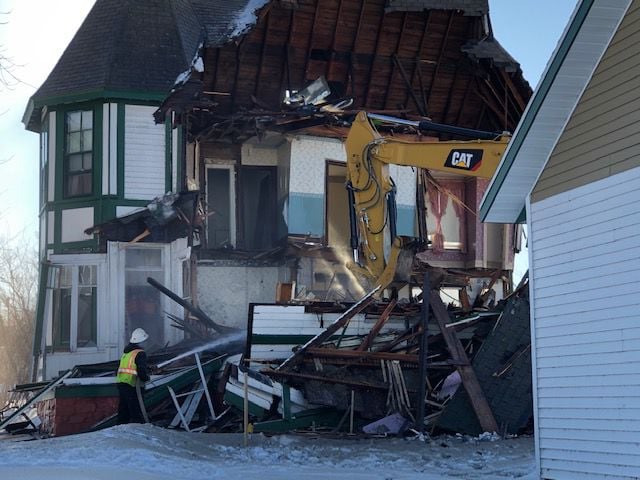 Curtains still hang in the windows of the 1885 Harrison House that was razed Monday by its new owners, the group that owns the Hotel Chequamegon. 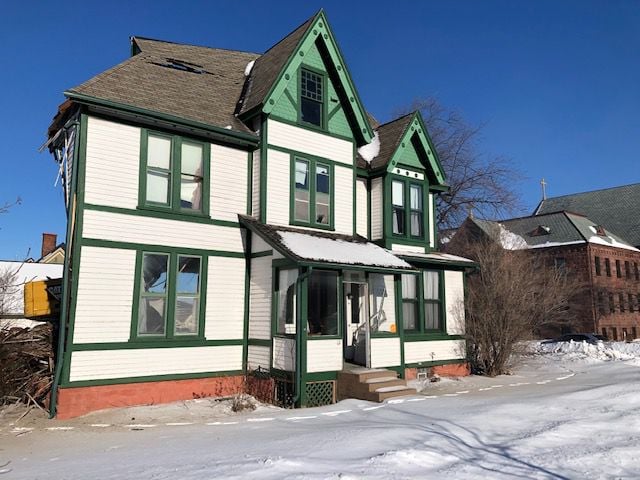 The façade of the Harrison House, just before the claw of a demolition excavator crashed through a front window.

One of Ashland’s historic homes fell to the wrecking ball this week and not everyone is happy about it.

The old Dr. George Harrison house at the corner of Lake Shore Drive and Fifield Row came down Monday morning. It now is owned by Island Investments, the company that owns the Hotel Chequamegon and an adjacent property that it had demolished last year.

Island Investments did not immediately return calls Monday seeking information about the company’s intentions for the property.

The house was built in 1885 by Samuel Fifield, founder of the Ashland Press and later speaker of the state Assembly and Wisconsin’s lieutenant governor, according to city records. It was a traditional Queen Anne-style home with a multi-gabled roof, a turreted tower and extensive gingerbread.

Neighbors and history buffs such as Magge Ericson, a former member of Ashland’s Historic Preservation Commission, were angered to see the piece of city history lost, and even more upset at how it happened.

“No one was allowed to really go in there,” she said. “I mean, the curtains were even still in the windows when they started tearing it down. Why didn’t they say, ‘Anyone who wants flooring or doors or whatever, come on in. We’re just going to tear it down anyway.’”

The building was known for its first owner, physician and pharmacist George Harrison, who came from England to the United States in 1859 and helped form the Ashland National Bank before serving as the city’s second mayor.

His son, also George and also a doctor, lived in the house until 1934, when it passed on to his son, George III, who died in 1960. George Harrison III’s wife, Agnes, remained in the house after his death, and she died in 2012.

The city once considered including the home as a locally important historic property, but owners at the time were not interested, Ashland Planning Director Megan McBride said.

Nor was it on state or federal historical registries, though it in many ways qualified.

“Not only is the house potentially significant under Criterion B for its association with Dr. George Harrison for his many accomplishments (including, but not limited to, his efforts in the establishment of the city’s street railway system), but it is perhaps even more notable as a confirmed house design from the 1878 catalogue published by Palliser, Palliser & Co., architects,” a survey of Ashland’s historic properties completed in 2017 said.

“Furthermore, and in regards to Criterion C: Architecture, the house is a very good and significantly intact example of the Stick Style of architecture of which there are few examples in the city. As of the 2001 survey, this house was identified as among the top two examples of its type; since that time, the best example, the Thomas Edwards House, has been demolished,” the report said.

Absent the historic designation, the city had no way of preserving the house, McBride said.

“There were no grounds for us not to issue a demolition permit,” she said.

McBride said the city is moving to have the remaining Fifield Row houses declared an historic district, but that won’t happen soon enough to suit Ericson.

“I’m going to Planning Commission tomorrow night and I’m going to say, ‘Hey, you guys hold the whole history, authentic history, in your hands and you’ve got to start looking at what ordinances do we need, what planning do we have to do, to protect this?'” she said Monday as the final walls of the Harrison House fell.  “Otherwise we’ll look like just another town with no character,” she said. “We already look like a strip mall and fast food to anyone passing on Highway 2.”

Meanwhile, McBride said the city has no information about plans Island Investments might have for the Harrison House land.

“They’ve said they want to develop it, but they’re in the financing and setup stage,” she said. “Maybe two years ago they bandied around the idea of moving the bandshell — it’s the same owners who own Canal Park Brewing — to build a brewpub, but nothing specific has been brought up this time around.”