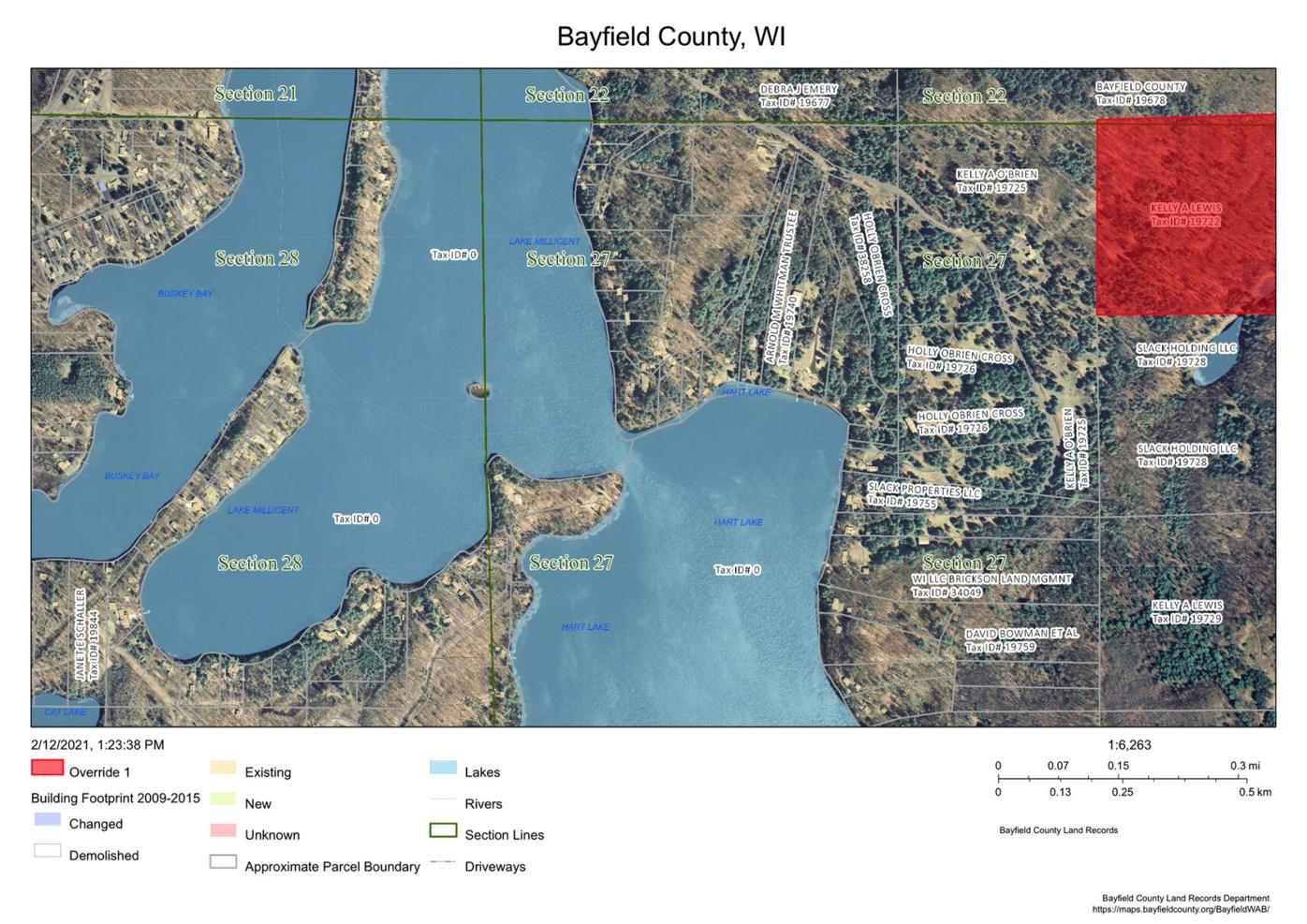 A 40-acre tract about 2,000 feet from Hart Lake in the Pike Lakes chain of lakes, colored red, is where a proposed sand and gravel mine has been proposed by South Shore Sand and Gravel. Company President Ralph Frostman said the mine is needed to provide a reliable supply of sand and gravel to meet needs of local businesses and governments. 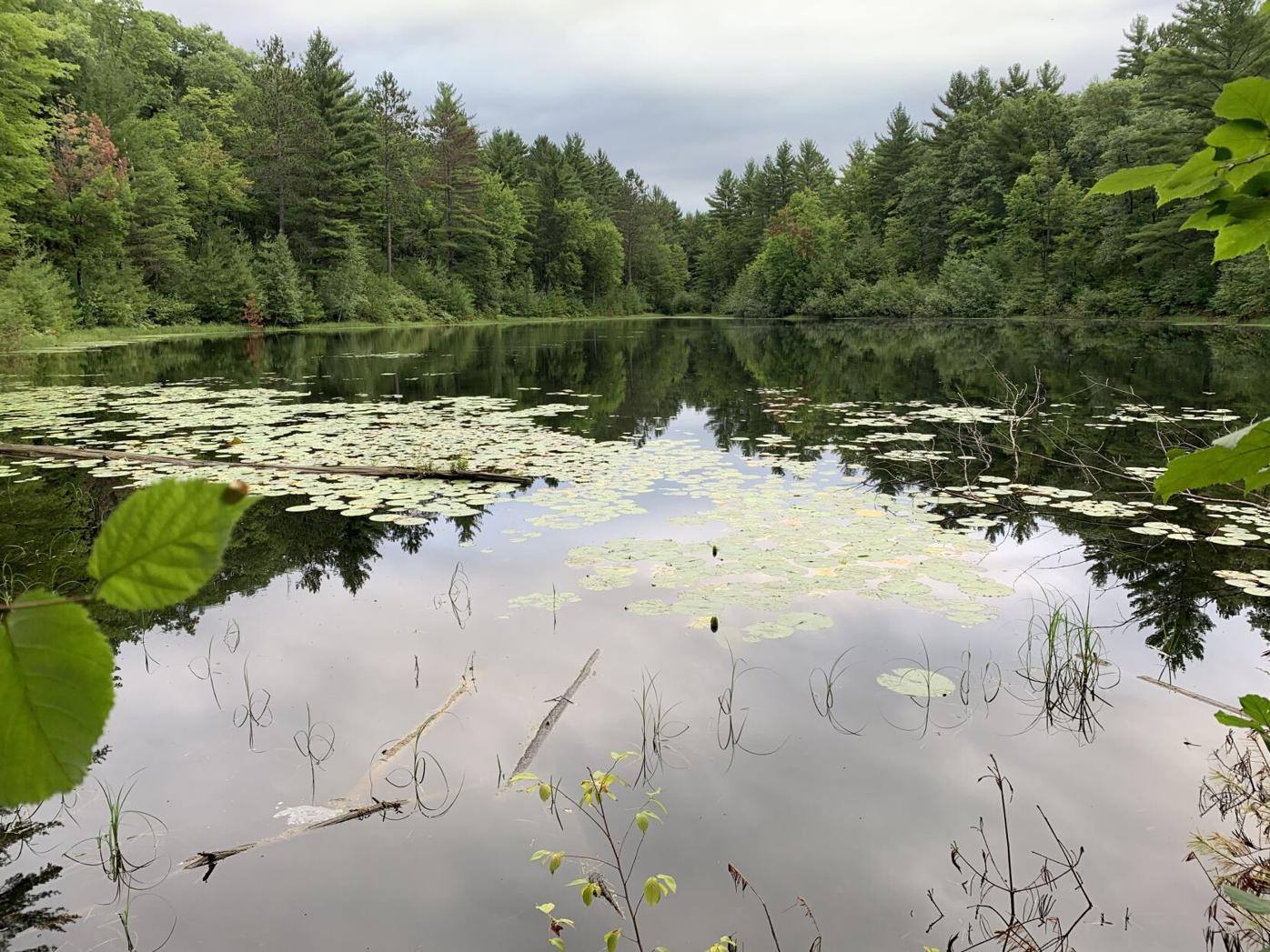 Ashland attorney Max Lindsey, who also owns property in the Pike Lakes area, said the mine could harm water quality in the area. He is representing mine opponents.

James Angster is a clinical psychologist who lives and practices in Richmond, Virginia, but he owns a second home on the Pike Lakes chain near Iron River.

Like other property owners in the area, he’s opposed to a proposed sand and gravel mine planned for a 40-acre property about 2,000 feet from Hart Lake on the chain.

More than 800 opponents now have signed onto a petition, many of whom packed an Iron River town board meeting in September to voice their concerns about the proposed mine. The town board voted 5-0 to deny South Shore Sand and Gravel President Ralph Frostman’s permit for the operation, but the fight wasn’t over.

The matter is to be taken up by the Bayfield County Planning and Zoning Committee Thursday, Feb. 18.

Angster said he and his fellow residents oppose the mine for several reasons.

“I am certainly concerned about the property values, but my major concern is that as we approach this summer and people will be returning to their lake homes, we are coming off a period of incredible stress and divisiveness. People look to the lakes as a place not only of recreation but of restoration,” he said.

Angster said the peace of the lakes helped with the healing process, and the noise produced by the gravel pit would damage the sense of restoration.

“I have been coming up to the lakes area since I was 5 years old. I recall some times when there were rock-crushing and gravel-mining operations going on. I know that sound, and I just don’t think its fair or healthy for the community to be subjected to that noise,” he said.

Angster said he shared concerns with the rest of the group opposing the gravel pit about impacts on property values and environmental impacts.

“But as a psychologist I am most concerned about the stresses it is going to place on people,” he said.

Max Lindsey is an Ashland attorney whose family has owned property on the Pike Lakes chain for several generations. He is representing opponents as Frostman’s permit application works its way through Bayfield County government.

Lindsey said he was not opposed to mining, but believes a cost-and-benefit analysis needed to be performed on the proposed pit, given its proximity to the Pike Lakes chain.

“It is one of the more pristine chain of lakes, with incredibly clear water and access to the public,” he said.

Lindsey said the pit would also be in direct conflict with the town’s zoning code because it is not within specified mining districts, and would thus require a special permit.

“There is no reason why any of these residents would expect to have this gravel pit put in next door to them,” he said.

Lindsey said the area has plenty of other areas in which South Shore Sand and Gravel can get the material it needs to supply local contractors — all within the county’s zoning regulations.

“It specifically carves out enough room around the Pike Lakes so this type of operation would not impact it,” he said. “It give plenty of other opportunities for sand and gravel mining out here.”

Lindsey said Bayfield County has the ultimate authority to issue permits for sand and gravel mining. He said the town hearing was just the first step in the process that Frostman has to go through before he can begin operations. Lindsey said while the county gives great deference to the decisions of town boards, it is not bound by those decisions.

“Historically though it’s 95 to 99% of the time that the County Zoning Committee agrees with the local decision,” Lindsey said.

Frostman said he is baffled by the level of opposition to the sand and gravel mine. He said in the past, gravel pits were routinely approved.

“But their mob showed up at the Iron River Town Board meeting, and I think every one of the town board members was afraid to vote for it,” he said. “A gravel pit in Iron River has never been denied before. I’ve been in business for 50 years and have never had any fines. I can’t think of any gravel pit that has caused Bayfield County any problems since they started the reclamation requirements.”

Despite what opponents assert, Frostman said there aren’t enough operational gravel pits in the region to satisfy demand. If there were, he wouldn’t propose creating a new one.

“There is only one other in Iron River, so the owner has a price monopoly,” Frostman said. “I would like to get back into it so I can have control over the cost and the quality.”

He also denied the possibility of water pollution on a sand and gravel pit.

“There is maybe 15 feet of gravel; once that’s gone it is reclaimed and it’s back to its natural state,” he said. “I’ve had plenty of pits before and I have never had any problem with the (state Department of Natural Resources) or the county.”

Frostman also denied that noise would be much of a factor, and noted that the town limits the times at which the pit can operate.

Frostman is prepared to face plenty of opponents at this week’s meeting, where he and his engineer intend to defend their plan.

“Bayfield County has always been for gravel pits, but I don’t know if they are going to change their position or what,” he said.

Bayfield County Zoning Department Director Robert Schierman said in his experience the Planning and Zoning Committee confirmed well over 90% of decisions made by town boards.

But he’s not surprised that this permit application is drawing the attention that it has.

“Every year it seems more and more frequent, as the population grows up here, there is less space and conditional use permits are more contested,” he said.

How contested? Schierman said he hasn’t seen such organized and vocal opposition since a concentrated hog-feeding lot was proposed five years ago in Eileen.

“I do think the applicant has a challenge in convincing the committee,” he said.

The County Planning and Zoning Committee meeting is scheduled for Thursday, Feb. 18, at 4 p.m. at the Bayfield County boardroom in Washburn. The public will be able to participate in the meeting in person or via voice either by joining Microsoft Teams Meeting at 715-318-2087 Conference ID: 367 786 385# or by linking to the online conference via the online agenda at https://www.bayfieldcounty.org/AgendaCenter/ViewFile/Agenda/_02182021-2334.