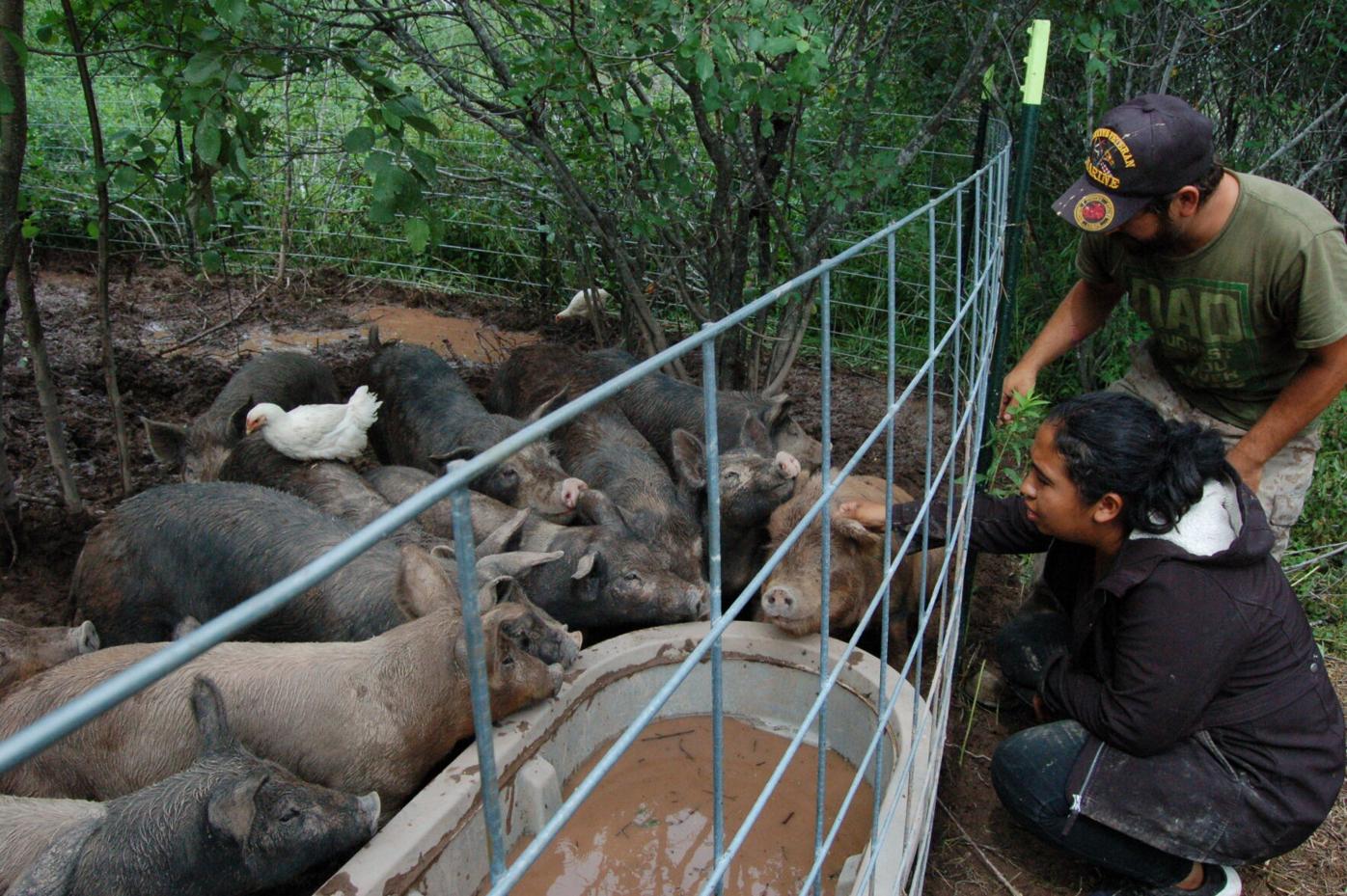 Rusty and Daisy Defoe are greeted by their pigs on the Defoe’s newly established farm on Binsfield Road. The couple is starting from scratch, living in a tent until they had a storage building placed at the site to convert into a tiny home. 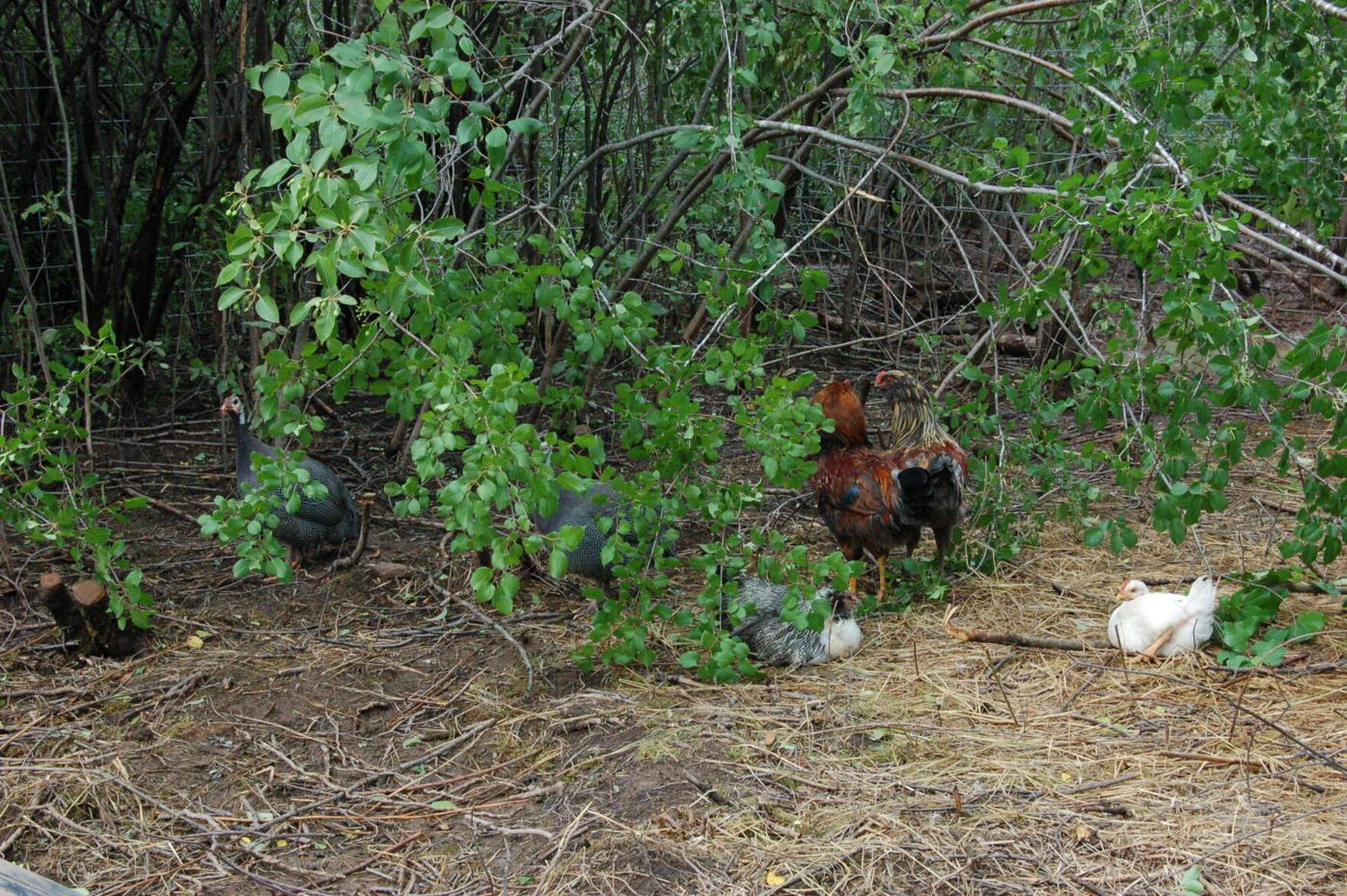 Chickens at the Defoe farm were none the worse for wear following a violent thunderstorm that struck the bay area last Thursday. 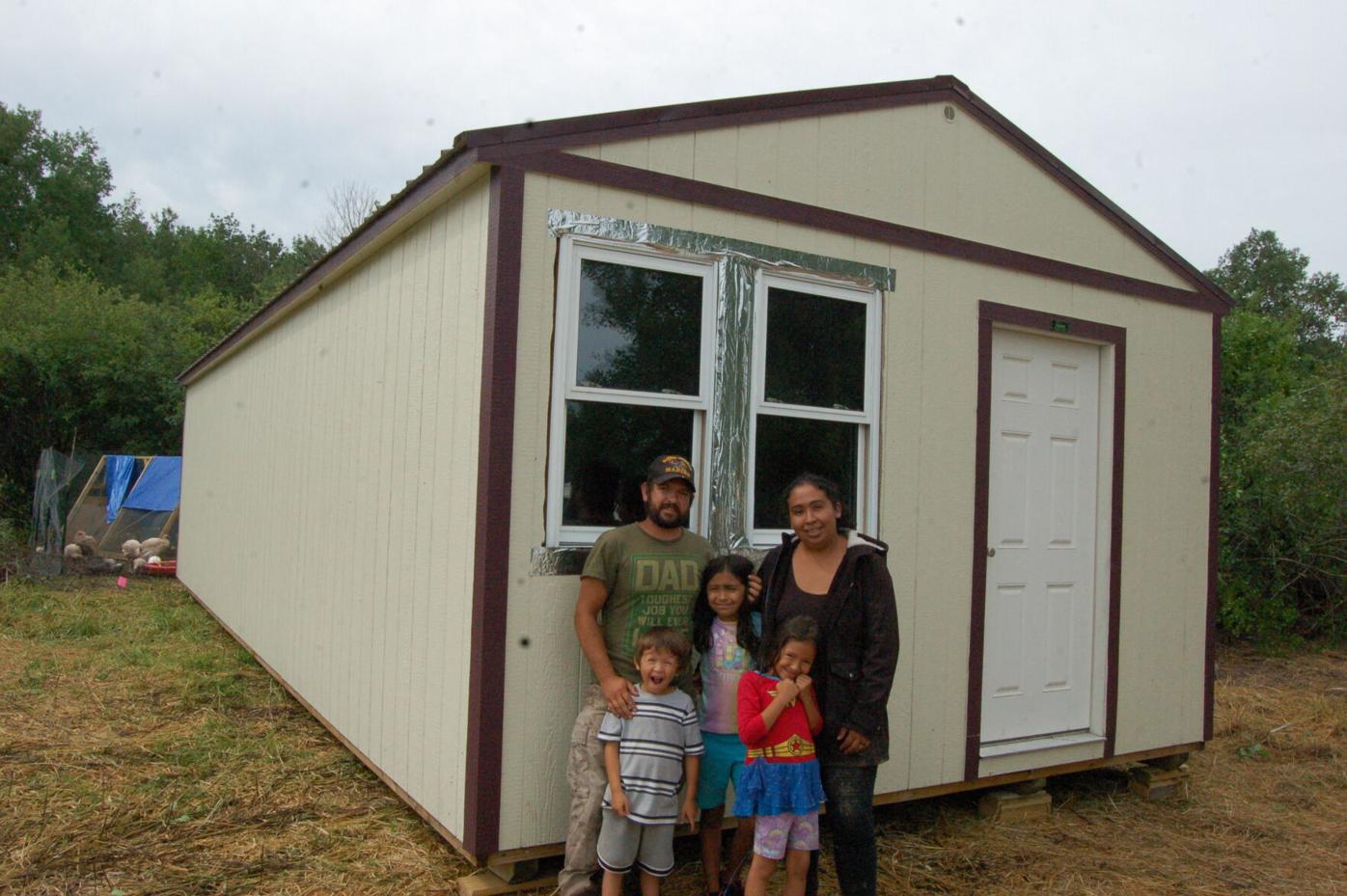 The Defoe family, Rusty and Daisy and their children, Rusty II (from left), 5, Itzel Defoe, 7, and Theia Defoe, 6, stand before the structure Rusty and Daisy plan to convert into a tiny home. Seen behind the home are part of the flock of 19 turkeys being raised by the Defoes.

Rusty and Daisy Defoe get strange looks from many passersby in front of their homestead on Binsfield Road.

The couple and their three children, along with pigs, goats, sheep, turkeys, chickens and assorted dogs, have taken up residence on five acres of land they purchased just south of the Calvary Tabernacle United Pentecostal Church.

Until last Thursday, the family lived in a tent tucked right up next to the pig pen. Now, a shed-like storage building has been dropped on the land and the Defoes are working to convert it into a tiny home.

The building arrived in the nick of time to beat a series of powerful thunderstorms that battered the Ashland area.

“We pitched camp in there because it was too wild and windy to stay in the tent,” Rusty said. “We’ve had wind and rain before, but this time it was too much.”

So the family huddled in the uninsulated structure with their dogs and waited out the storm.

“Every couple of hours we’d check to make sure that the trees hadn’t fallen on the animals or fences,” said Daisy. “A couple of the chickens got out, but it was better than the chaos I had pictured. The tent was entirely blown down and couple of the poles were snapped, but it still remained pretty much water-tight. It was an interesting night.”

It is a tale worthy of the era of Wisconsin homesteading, a time that ended shortly after the turn of the 20th century when immigrant farmers tried to scratch out a living in the cutover lands of northern Wisconsin.

The Defoes set their sights on homesteading several years ago when Rusty, a resident of Red Cliff, studied cooking at Le Cordon Blu, a culinary college in San Fransisco. There, at a martial arts studio, he met Daisy, who lived in Santa Ana, near Los Angeles. She studied at San Francisco State University before earning a degree in business administration from Victorville College. The couple married and Rusty joined the Marine Corps. Following his tour of duty, the two rented a small farm in Lucerne, Cal., but soon realized buying a place of their own was never going to be practical in California because of the high price of land.

“In California you have to be a millionaire to farm,” Daisy said.

They farmed for a while in Minnesota before financing became available to buy the land on Binsfield Road.

The property is located within Ashland city limits in a district that is zoned for future development and was formerly zoned agricultural. Nevertheless, agriculture, including raising livestock, is an acceptable use in such a district, said Ashland Director of Planning and Development Megan McBride.

“They have pulled permits to put up fencing and a shelter for the animals, they have not yet pulled a driveway permit or a permit for the home that will be going on the site as well. Since the lot is over five acres, a single-family home with farm is an allowable use in the future development district,” she said.

McBride added that there was no city ordinance prohibiting the Defoe family from camping on their own land on a temporary basis.

“Zoning was very important for us when we bought the land, because we wanted to bring our livestock with us,” Daisy said. “We are hoping to expand the operation in a year or so.”

The expansion would give them about 15 acres of land, but before they can do that, they have to fence off the current farm, build permanent animal pens, insulate the house, and build solar panels that would enable them to live off the grid.

One thing that slows down the process is that they have to clear all the land by hand.

“We don’t have the money to come in with a bulldozer and take the brush down; I don’t even have a chainsaw. This is my guy right here,” he said, motioning to a machete. “That’s what I’ve cut down most of the brush with.”

They continue to face a lot of challenges. A short driveway requires a permit, a culvert and several hundred dollars worth of gravel.

The family will be allowed to use a composting toilet, which bypasses a major expense. However they are still hauling in water until Rusty can drill a well.

The two understand the magnitude of the project they have taken on, but they say it is a lifestyle they have learned to love, and once they are able to produce enough livestock to market, they believe it will be self-sustaining.

“Everybody has to have someone to produce food, and farmers are dying out at an extraordinary rate. There are not that many young people who want to become farmers,” Daisy said. “I want people to know that we are willing to take care of animals that will eventually wind up on their plates. We want them to know where their food comes from.”