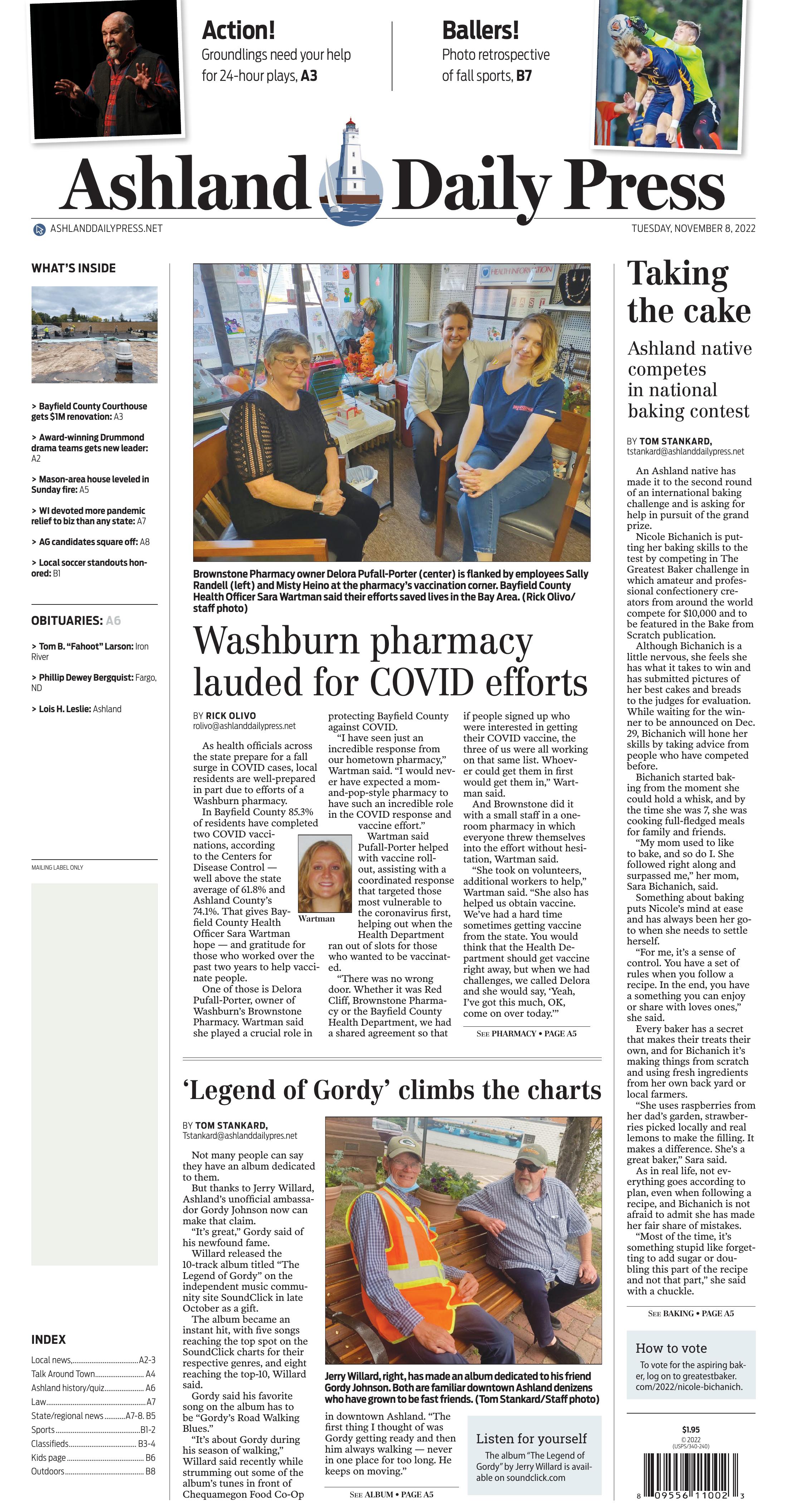 As health officials across the state prepare for a fall surge in COVID cases, local residents are well-prepared in part due to efforts of a Washburn pharmacy.

In Bayfield County 85.3% of residents have completed two COVID vaccinations, according to the Centers for Disease Control — well above the state average of 61.8% and Ashland County’s 74.1%. That gives Bayfield County Health Officer Sara Wartman hope — and gratitude for those who worked over the past two years to help vaccinate people.

One of those is Delora Pufall-Porter, owner of Washburn’s Brownstone Pharmacy. Wartman said she played a crucial role in protecting Bayfield County against COVID.

“I have seen just an incredible response from our hometown pharmacy,” Wartman said. “I would never have expected a mom-and-pop-style pharmacy to have such an incredible role in the COVID response and vaccine effort.”

Wartman said Pufall-Porter helped with vaccine rollout, assisting with a coordinated response that targeted those most vulnerable to the coronavirus first, helping out when the Health Department ran out of slots for those who wanted to be vaccinated.

“There was no wrong door. Whether it was Red Cliff, Brownstone Pharmacy or the Bayfield County Health Department, we had a shared agreement so that if people signed up who were interested in getting their COVID vaccine, the three of us were all working on that same list. Whoever could get them in first would get them in,” Wartman said.

And Brownstone did it with a small staff in a one-room pharmacy in which everyone threw themselves into the effort without hesitation, Wartman said.

“She took on volunteers, additional workers to help,” Wartman said. “She also has helped us obtain vaccine. We’ve had a hard time sometimes getting vaccine from the state. You would think that the Health Department should get vaccine right away, but when we had challenges, we called Delora and she would say, ‘Yeah, I’ve got this much, OK, come on over today.’” 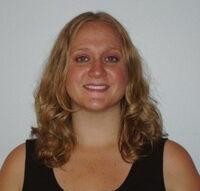 Pufall-Porter was ordering from the federal pharmacy program, which had better access to vaccines, especially at the beginning of the program when supplies were short, than even health departments.

“We’ve had a great relationship, transferring vaccine back and forth, making sure we had adequate supplies,” Wartman said. “She even went into the Washburn schools and did a mass-vaccination clinic. She had the whole thing done while still running a business.”

Because the vaccine was always free, Pufall-Porter made only nominal administration fees for completing injections, Wartman said.

And all that craziness helped Bayfield County reach vaccination benchmarks.

“It would have been a much more difficult challenge to get vaccine, and to get it quickly. This was a unique partnership that we would never have even thought of before,” Wartman said.

Pufall-Porter said her efforts and those of her staff were just their contribution to a global fight against disease.

“We are all a community here,” said Pufall-Porter. “If your neighbor is sick, it doesn’t help you out in any way.”

Pufall-Porter interned under the pharmacy’s previous owner, Jeff Langford. When she bought the business from him, one of the most important factors was that she intended to keep it in place as a true community pharmacy.

“It was really important for me to preserve that and keep it going,” she said.

Pufall-Porter was born and raised in Ashland, she her parents, Bob and Carol Pufall, instilled in her a sense of duty towards her fellow community members, she said.

“You see it all the time here. When somebody’s house has a fire, you will see lumberyards chip in, and when the pandemic happened, OK, it was the pharmacy’s turn,” she said.

Pufall-Porter estimates that between her and her staff, Brownstone Pharmacy has given over 10,000 vaccinations and boosters.

Knowing that those thousands of injections probably saved a lot of lives was “overwhelming.”

“Sometimes when I hear people say they are planning to go places. It makes me happy to know they won’t be getting sick, and I’m glad to know that I helped just a little bit with that,” she said.

Jerry Willard, right, has made an album dedicated to his friend Gordy Johnson. Both are familiar downtown Ashland denizens who have grown to be fast friends. (Tom Stankard/Staff photo)

Not many people can say they have an album dedicated to them.

But thanks to Jerry Willard, Ashland’s unofficial ambassador Gordy Johnson now can make that claim.

Willard released the 10-track album titled “The Legend of Gordy” on the independent music community site SoundClick in late October as a gift.

The album became an instant hit, with five songs reaching the top spot on the SoundClick charts for their respective genres, and eight reaching the top-10, Willard said.

Gordy said his favorite song on the album has to be “Gordy’s Road Walking Blues.”

“It’s about Gordy during his season of walking,” Willard said recently while strumming out some of the album’s tunes in front of Chequamegon Food Co-Op in downtown Ashland. “The first thing I thought of was Gordy getting ready and then him always walking — never in one place for too long. He keeps on moving.”

That’s how most people know Johnson — as a familiar and smiling face as he strides around downtown Ashland in his trademark blaze-orange vest and Packers hat, stopping to chat with merchants and shoppers.

Over the course of 64 years, he has endured about 40 operations that have enabled him to walk and talk, defying doctors who predicted when he was a child that he would never do either.

Despite all the hardships he’s experienced, Gordy has maintained a positive attitude that is contagious to everyone he encounters on his walks through town.

“If you meet him, he always has a smile on his face,” Willard said.

That positive energy is what inspired the album and Willard made sure to include his friend in the creative process, asking him what the songs should be about and what order they should be in.

The two are kindred souls of a sort, both downtown denizens who have grown to be fast friends.

Willard met Gordy about five years ago after hearing about him through his wife, Candace, for several years. The former property owner has been retired for several years and can often be found playing his guitar in front of the Co-Op.

Gordy is frequent visitor while on his walks and the two have forged a friendship that culminated in the album.

“We threw ideas back and forth. I think his favorites go from No. 1 to No. 10,” he said with a chuckle. “Everything there is the way Gordy wanted it.”

Willard hopes people like the album that he dedicated to Gordy and gave to the community as a gift from his heart.

“My whole goal is, try and help people,” he said.

The album “The Legend of Gordy” by Jerry Willard is available on soundclick.com

Nicole Bichanich is competing the Greatest Baker Challenge for the chance to win $10,000. (Contributed photo)

Baking cakes and other treats has helped put Nicole Bichanich at ease since she was little. (Contributed photo)

An Ashland native has made it to the second round of an international baking challenge and is asking for help in pursuit of the grand prize.

Nicole Bichanich is putting her baking skills to the test by competing in The Greatest Baker challenge in which amateur and professional confectionery creators from around the world compete for $10,000 and to be featured in the Bake from Scratch publication.

Although Bichanich is a little nervous, she feels she has what it takes to win and has submitted pictures of her best cakes and breads to the judges for evaluation. While waiting for the winner to be announced on Dec. 29, Bichanich will hone her skills by taking advice from people who have competed before.

Bichanich started baking from the moment she could hold a whisk, and by the time she was 7, she was cooking full-fledged meals for family and friends.

“My mom used to like to bake, and so do I. She followed right along and surpassed me,” her mom, Sara Bichanich, said.

Something about baking puts Nicole’s mind at ease and has always been her go-to when she needs to settle herself.

“For me, it’s a sense of control. You have a set of rules when you follow a recipe. In the end, you have a something you can enjoy or share with loves ones,” she said.

Every baker has a secret that makes their treats their own, and for Bichanich it’s making things from scratch and using fresh ingredients from her own back yard or local farmers.

“She uses raspberries from her dad’s garden, strawberries picked locally and real lemons to make the filling. It makes a difference. She’s a great baker,” Sara said.

As in real life, not everything goes according to plan, even when following a recipe, and Bichanich is not afraid to admit she has made her fair share of mistakes.

“Most of the time, it’s something stupid like forgetting to add sugar or doubling this part of the recipe and not that part,” she said with a chuckle.

But those mistakes have made her better.

“I have learned to write things down so I don’t have to do the math in my head as I go along,” she said.

Her favorite part of baking, however, isn’t the act of baking — it’s sharing what she makes with the people closest to her.

“I have friends that are lactose intolerant or have diabetes. You can find a recipe for them that tastes good and make it for them and both can enjoy it together,” she said.

Seeing their reaction makes it all worthwhile, Nicole Bichanich said.

“It puts a smile on their face. Happiness is the reason to be on this earth. So if I can put a smile on someone’s face, my day has been made and I hope theirs is, too,” she said.

Even if she doesn’t win the competition, Bichanich has learned a thing or two from the experience.

“I have learned to be an extrovert,” she said. “I’ve had to reach out and talk to people. I’ve learned it’s OK to ask for help.”