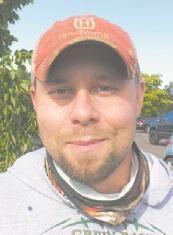 A Penokee Hills Education Project billboard stands on Ashland's south side before someone tore it down in July. A replacement sign also was stolen in August.

Billboards on Ashland's south side opposing Enbridge Energy Co.'s Line 5 through the Penokee Hills were stolen in July and August, but the group responsible for the signs will erect a new one and is planning an event to celebrate protecting the environment later in September.

Frank Koehn of the Penokee Hills Education Project said the environmental group originally formed to educate people and protest the proposed Gogebic taconite mine in the wetlands east of Mellen. Those plans fell through in 2015.

Now it has regrouped on a mission to urge people to take an interest in the proposed reroute of Enbridge's Line 5 to the south of the Bad River Indian Reservation in Ashland and through the Penokee Hills.

"If they support the pipeline, that's all right," Koehn said. "It's just we need to be fully aware exactly how precious that whole region is."

The Canadian energy company began looking to move Line 5 after the Bad River Band of Lake Superior Chippewa filed a lawsuit to shut it down and move it off the tribe's reservation near Lake Superior to the east of Ashland.

The Penokee Hills Education Project leaped back into action in March to protest Line 5's reroute through the watershed, and in May the group erected a billboard on Highway 13.

But on Aug. 20, Koehn filed a complaint with the Ashland Police Department saying someone had torn down a replacement billboard that had been erected after the original was stolen.

The police checked with Northwoods vacuum service across the highway, and its cameras recorded that a GM crew cab truck had stopped near the sign at around 11 p.m. on Aug. 20 for a minute, although no license plates or people were visible.

The Penokee Hills Education Project plans to erect a new sign and set up trail cameras. The group is waiting for Lamar Co., which owns the frame, to replace the billboard and place lights to shine on it all night long, Koehn said.

Koehn said he did not suggest that Enbridge had anything to do with the vandalism.

Penokee Hills Education Project also has made plans to host a Communities United by Water to celebrate the protection of the environment and resources on Sept. 26 at Bayview City Park, 1803 E. Lake Shore Drive, Ashland, although with the re-emergence of COVID-19 cases the group may cancel.

But if it goes forward a ceremony begins at 10 a.m. and information tables, speakers and music will open at 11:30 a.m. A Baaga'odowe Exhibition to oppose the line begins at 1:30 p.m., and a caravan leaves for "Bury Enbridge" funeral rites at 2:30 p.m.

Environmental, tribal and advocacy organizations are welcome, but are responsible for organizing their own member's security and safe activities. Social distancing and masks will be required.

However, if Ashland County follows Bayfield County's suit and bans large gatherings, the event will be canceled. In the meantime, the group is discussing whether or not to move forward even if a ban is not instituted.

With help from the Wisconsin National Guard, Bayfield County will hold a free COVID-19 testing site Friday in Washburn.

The site will be open from 11 a.m. to 7 p.m. at the Bayfield County Garage, 311 S. First Ave. E. Testing will be done on a first-come, first-served basis or by appointment by calling the Bayfield County COVID-19 hotline at 715-373-3324. Optional pre-registration also is available via register.covidconnect.wi.gov.

The county prefers that

people showing symptoms or who have had close contact with positive cases attend the event.

The testing day was announced following another spike in local cases, this time connected to a wedding party, and a county-wide order prohibiting mass gatherings. The order noted that the county's caseload had more than doubled over the preceding 30 days.

Bayfield County had 65 confirmed cases as of Friday, the latest statistics available as the Daily Press went to print, 16 of which were active. Fortyeight patients had recovered and one person had died. The county currently was monitoring about 100 people, such as those with pending test results and close contacts of confirmed cases.

The Health Department also is keeping an eye on people showing symptoms without test results but who are suspected of having COVID-19 within the last 14 days.

The COVID-19 activity level in Bayfield County is rated as high.

Ashland County has recorded 44 positive cases as of Thursday, with 35 recovered and one death. The county is actively monitoring 75.

The Ashland Police and Fire Commission has received a total of six applications to fill the post of chief of police.

Former Chief Jim Gregoire retired in July and since then, police Capt. Bill Hagstrom has been serving as interim chief. Hagstrom is among the six to submit an application for the post that pays about $80,000 a year.

The applications, and any others that may yet arrive, will be considered at a special meeting of the commission on Sept. 23. Commission President Gordon Gilbertson said members likely will perform a preliminary vetting of the applications, so part of the meeting will take place in closed session.

"I would assume, and it is just my assumption, that we are going to look over the candidates we have and see on paper if they look like they would be viable candidates to go on further," he said.

He also said the process the commission will use for final consideration has not yet been chosen.

"Nothing has been done yet; the commission has not even decided if they want to do a written examination or an assessment center. That is basically what we are going to meet for in the next meeting." He said.

Gilbertson said he didn't know what process it would use to select the next chief of police; in the past, the commission has discussed testing and an independent assessment center panel that would make recommendations to the commission.

Gilbertson said such a panel gas not yet been decided on, but remains a possibility.

"It really is whatever the commission wants to do," he said. "We have not ruled anything in or out. I've got my own ideas but the commission has their own ideas as well, so we will have to decide what process we are going to use," he said.

Gilbertson said he hoped the process would be completed and a new chief named by the end of the year.