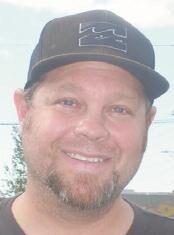 Kids frolic at the Oulu Corn Maze in years past. The Ken Johnson Farm is hosting the annual fall fun activity on weekends through the end of October.

October fun isn't taking a break this year at Ken Johnson's farm in the Iron River area. The Oulu Corn Maze is open to confound and amaze intrepid trekkers seeking an outdoor activity as fall colors give way to falling leaves and thoughts turn to warm apple cider and hot cocoa.

The maze has been providing outdoors fun and enjoyment for kids young and old since 2004, when Johnson founded it at his farm in Oulu.

"He wanted to have children have fun, and it was the centennial for Oulu that year," said maze worker Angela Nollet.

The 10-acre maze is designed in a different shape every year by local collaboration, and no professional designers are called in to help.

"We do it the hard way," Nollet laughed.

Guests to the maze buy their tickets in the barn and then hop on a wagon for the hayride to the site. Those who venture into the maze usually take about an hour to find the hidden posts and emerge.

And as the farm won't reveal what the maze looks like to guests until they arrive, they mostly have to trust their navigational skills.

The corn maze, which opened the first weekend in

October and runs each weekend until Oct. 31, has been enjoying some good, dry weather. Some people have even dared to wear tennis shoes instead of sturdy boots that are typically recommended, and Nollet anticipates conditions to continue for a while.

"We have some really good weather coming up this weekend," she said.

The corn maze is alone in Bayfield County in opening during this year of the COVID-19 pandemic, but Johnson did have to cut back on activities. The farm will not host a Halloweenthemed weekend or open during the nighttime.

The operators conferred with the Bayfield County Health Department to establish pandemic safety guidelines, such as maintaining social distancing and directing foot traffic one way through the barn.

The maze is open from noon to 5 p.m. and is located at 2595 Pudas Road, Oulu. To find it take Highway 2 to Oulu Rock Road, go north to first stop sign and continue north on Highway B. Turn right on Pudas Road.

The cost is $8 for adults and $7 for children 7 and younger.

Vehicles travel on Highway 13 at the White River in Ashland County Thursday. Most vehicles registered in the county would be taxed $25 a year under a proposal to be considered by the Ashland County Board on Tuesday Oct. 6. Funds raised by the tax would be earmarked for transportation-related expenses.

A proposed $25 registration tax on most privately owned non-commercial vehicles in Ashland County died at the county board meeting this week when no members advanced the measure for a formal vote.

Members of the county's Highway Committee earlier voted 4-1 to recommend passage to the full board, but not a single member of the committee voted to bring the measure up for debate.

Dick Pufall of Ashland, vice chairman of the highway committee, blamed a flood of constituent opposition to the plan for its death — though no members of the public spoke against it at the meeting.

"There was quite an outcry," Pufall said, recalling the more than dozen phone calls he received from angry voters.

"It wouldn't have gone through anyway," he said. "We tried that on the city council, and nobody was in favor of it. You figure that a $25 investment from most people is not that big a deal, but with the COVID thing going around and nobody

working, no money around, a lot of people who don't have a job, it's a bad time to be asking anybody for anything."

Ashland County Administrator Clark Schroeder proposed the $25 tax in an effort to raise $330,000, which would have helped cover a projected $430,000 shortfall in the county budget.

Like many rural Wisconsin counties, Ashland County is enjoying a boon in sales tax revenue — $1,102,836 thus far in 2020 up $50,182 from the same time last year. But Schroeder said that is not enough to make up for a $200,000 shortfall in timber-sale revenue and high county costs associated with fighting and tracking the pandemic.

Although the board didn't formally debate the wheel tax, the topic came up during discussion of the proposed county budget, when several board members said they had been contacted by constituents who had almost unanimously expressed their opposition.

Board member Kathy Schutte of Marengo said she received a total of 53 comments from people in her district, just three of whom supported the idea.

"When the Daily Press came out with the story about the wheel tax, our phones on the county board started ringing. Emails, phone calls, Facebook posts. The majority of the people were against the wheel tax; they said it was not the time to do a tax because of the worldwide pandemic," she said. "Ashland County is a poor county, it has affected them so much that they felt it was not right to put the tax burden back on the residents when they have already paid registration taxes. This is just another tax on top of that."

Schroeder said that without the wheel tax income, the county would have to draw on its savings of about $1.5 million. He also said he proposed the tax as a one-year revenue source, but several board members including Schutte were dubious.

"People were also concerned that the tax would not be here for just one year, but would end up being here forever," she said.

Unlike Schutte, George Mika of Marengo would have voted in favor of the tax, which he considers a fair way to cover the county's budget shortfall. But he never got that chance because members of committee that recommended the fee never brought it to the floor for discussion, as required by board rules.

"They are the ones who brought it forth, they should have been making that motion. Why they didn't, I have no clue," he said. "I would have voted for it if they had brought it up. I think that was a pretty cheap way of making a few bucks. The highway committee endorsed it four to one, and the finance committee knew about it, and why they didn't bring it to the floor is beyond me."

Pufall said he didn't suggest debate on the fee because he believes the $500,000 the county has received from Enbridge Energy Co., a payment made as part of negotiations for Line 5's reroute, should help cover the county's red ink.

"I suggested they use that money a long time ago," Pufall said. "I mean, we got that money for nothing, why the hell not use it? If you are saving it for an emergency, I don't think there is going to be a bigger emergency than we have right now."

With the rejection of the wheel tax, Schroeder said the county will consider other new sources of money including a premier resort tax, which would allow the county to impose a 0.5% sales tax to raise county revenues.

Schroeder said for the immediate future, the county would borrow $1 million to fund highway projects and take about $250,000 from savings to fund general operations.

"It's not sustainable," he said.

Over the past 16 months, multiple developers have presented proposals to Washburn City Council members for redeveloping the former Brokedown Palace building, and now two more are offering their ideas.

Dan Hudson, who has longtime ties to Washburn, and Washburn resident Badger Colish are making separate cases for developing the cityowned property at 204 Bayfield St.

Hudson acquires depressed properties and redevelops them, include the old fire station and a motel in Ashland, according to records provided to the city.

He wants to enter into a deal with the city to redevelop the property in stages. First, Hudson would redo the exterior and then gut and renovate the ground floor to accommodate at least one commercial tenant. The third stage would involve remodeling the second floor for apartments.

Colish, owner of a brewingconsulting service called The Brewing Badger, works with multiple makers of brewing equipment and designs, installs and commissions craft breweries in North America. He created the Canal Park Brewery in Duluth, and some of his projects have him traveling the world, according to city records.

Colish wants to transform the property into a destination brewpub.

Since June 2019, the council has heard at least three proposals for the dilapidated storefront that has stood vacant since mid-2017, when the city bought the building after receiving numerous complaints about its condition,

Real estate agent Kevin Porter and Nathan "Freddie" Monkelien approached the council in June 2019, saying they wanted to buy the building to convert it into a mix of housing and commercial space.

Washburn City Administrator Scott Kluver said he hasn't heard from Porter, Bell or Gable. The last communication he had with Chequamegon Holdings was several months ago, and the developers said they were waiting to see how the COVID-19 pandemic panned out.

At this time the City Council is merely asked to approve the concepts of the proposal and authorize city representatives to negotiate with the interested parties.

The Brokedown Palace was known as the premier Northwoods venue for live blues in the early 1990s, but the building also has been the site of numerous other businesses, including a pizza parlor, furniture store, movie theater and restaurant.

In the meantime, Ashland real estate company Anthony Jennings & Crew has the property listed for sale at $189,900.