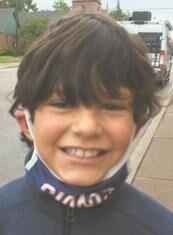 Wendy and Steve Moore wipe their hands down with sanitizer at their store, Moore's on Main. When the Ashland clothing store reopened in May it asked all customers to wear facemasks. Masks would become mandatory if the city adopts proposed ordinance.

An ordinance that would require facemasks in Ashland was one of two ordinances considered by Ashland City Council members Tuesday evening as the Daily Press went to press.

The ordinance has been debated in meetings going back to May, but questions about such an ordinance's legality have kept council members from voting on a facemask mandate like that enacted by Bayfield and other cities across the state.

A story on the city's action will be posted on the Daily Press website Wednesday.

"Our local municipalities are in a difficult position with enforcing any mask requirements or other Covid-19 related restrictions," said attorney Max Lindsey in a letter to council members. Lindsey is a member of the Ashland law firm Anich, Wickman and Lindsey, and was acting on behalf of city attorney Tyler Wickman.

Lindsey said only municipalities that had a local health department could take advantage of "pretty vast authority" for regulating activities in light of a public health crisis.

"It is uncertain whether the city of Bayfield ordinance will stand up to any legal challenge as there have not been any local ordinances that have been upheld by any higher courts in Wisconsin," he said

Still, Lindsey said the city could take adopt some measures, including a resolution urging the county health department to issue a mandatory mask order and any other restrictions that would be beneficial to the city.

A second proposed ordinance before the council calls for city enforcement of orders made by public health officers, and calls for fines of from $200 to $500 for each violation.

Lindsey said in his conversations with police, he has been told that there are other ways to keep people safe even without a mask ordinance.

"Private businesses can, and many have, require customers to wear a mask upon entry," he said. "If a customer refuses to wear a mask, the business generally has the right to refuse service to that customer and ask them to leave. If the customer refuses to leave, law enforcement would be able to issue trespassing citations and if any argument ensued, it would be possible to issue disorderly conduct citations."

Council President Kevin Haas said many council members would like to adopt a local mask mandate.

"I think most of the council is in favor of this. It's just not wanting to be sued that is a big thing," he said.

Haas said he favored the measure as well, but had questions about enforcement.

"We can't have the police running around telling people to put on masks or citing people for not wearing them, taking them away from their other duties," he said.

Council Member Matt MacKenzie said he believed the moral force of a mandatory facemask ordinance would carry a lot of weight.

"Most reasonable people are going to comply with it. I don't think we have to threaten people with jail or anything foolish like that," he said. "It's a matter of getting the information out there and asking for voluntary compliance. People are going to do what is right."

The Ashland County Health Department on Tuesday announced that customers and staff at four local businesses may have been exposed to coronavirus earlier this month.

Health Officer Elizabeth Szot said the businesses are being identified so residents can be aware of their possible exposure and because tracing contacts with patients who visited large businesses is difficult.

The businesses and dates of possible exposure are:

The Health Department urged anyone who visited the businesses on the dates and times listed to monitor themselves for symptoms for 14 days from the time of exposure. Symptoms include fever, chills, cough, shortness of breath, loss of taste or smell, sore throat, fatigue, body aches, diarrhea, vomiting and nausea.

Positive coronavirus cases across the country now are growing exponentially, soaring from 3 million to more than 4 million over the past two weeks, with a death toll approaching 150,000.

Ashland and Bayfield counties have followed the same pattern since early June, going from a combined five cases to at least 34 as of Tuesday as new patients have been identified almost every day.

Szot said in a release that the numbers "clearly demonstrate the presence of community spread" of the disease.

She again urged residents to avoid gatherings of any size, to stay apart from one another when out in the community, to wear face coverings and to frequently wash and sanitize hands.

"We are in this together," she said. "We can choose to protect each other and ourselves and thereby protect our community and economy."

The Bayfield Heritage Association closed its doors this summer in response to the COVID-19 outbreak, but that's not preventing the society from sharing its love of local history.

The association has been posting virtual exhibits online and with live Zoom presentations, one of which on Wednesday will highlight the Apostle Islands National Lakeshore's 50th anniversary.

The exhibit features turn-of-the-century postcard images from the association's Pike Research Center of brownstone formations in the islands that have been lost to time, waves and weather.

"He wrote a narrative that coincides perfectly with the postcards," Jeannette said.

The exhibit will debut live at 7 p.m. Wednesday via Zoom at meeting link https://us02web. zoom.us/j/85390012322, and Jeannette will record the presentation to post online afterward that will include remarks by Bob Nelson and an Apostle Islands National Lakeshore representative.

The association's museum has closed its doors this summer due to COVID-19 concerns and has made sharing Bayfield's rich history over the Internet a priority.

The association previously had dabbled recording virtual exhibits, such as for the Old Bayfield Jail, but the pandemic spurred them to create even more, Executive Director Megan Boyle said.

Future virtual exhibits include "Gaylord Nelson: Mover, Shaker and Sausage Maker — the Story Behind the Creation of the Apostle Islands National Lakeshore at 7 p.m. Aug. 12 and "Bayfield's Role in the Civilian Conservation Corps' Reforestry of Cutover at 7 p.m. Sept. 16