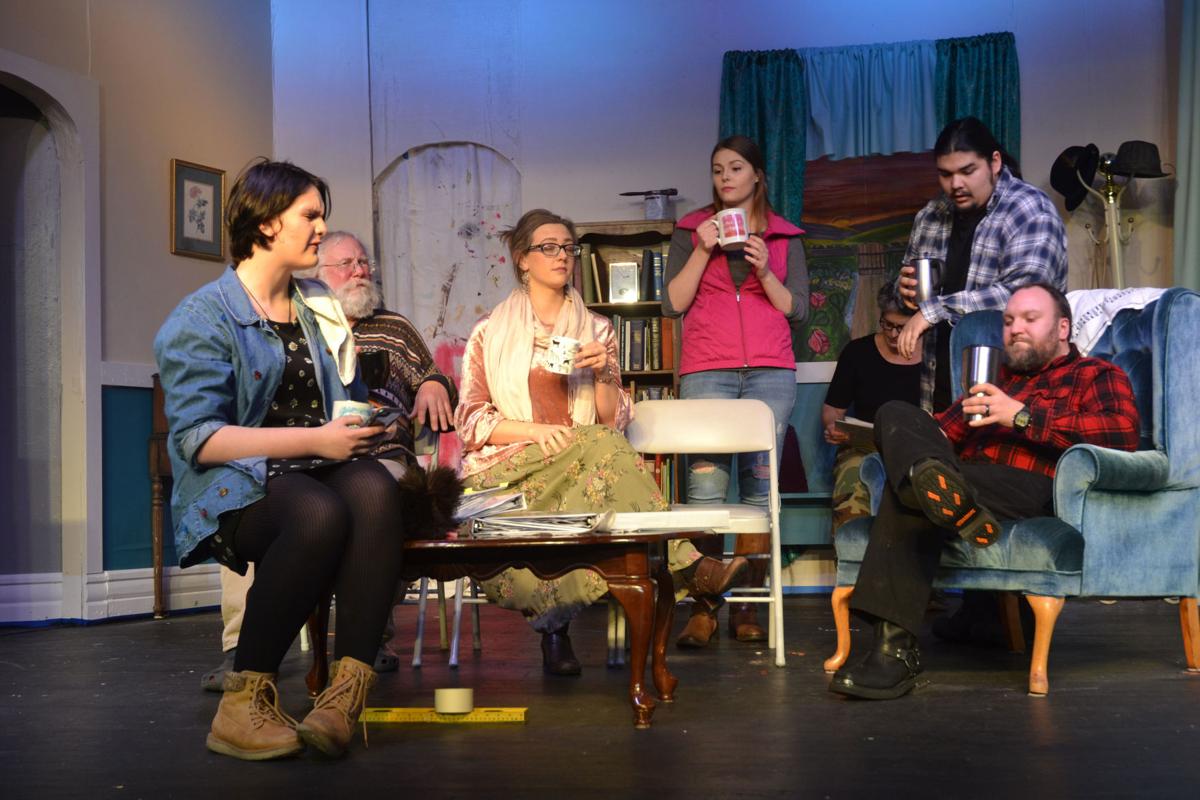 Drew Rekemeyer, left, Bradley Lemire, Laura Rovi, Becca Moore, Kevin Riddle and Matt Nemec are part of the cast of “Play On!” the hilarious tale of a community theater troupe trying to put together a show. The CTA production is on stage at Ashland's Rinehart Theater Feb. 1-10. 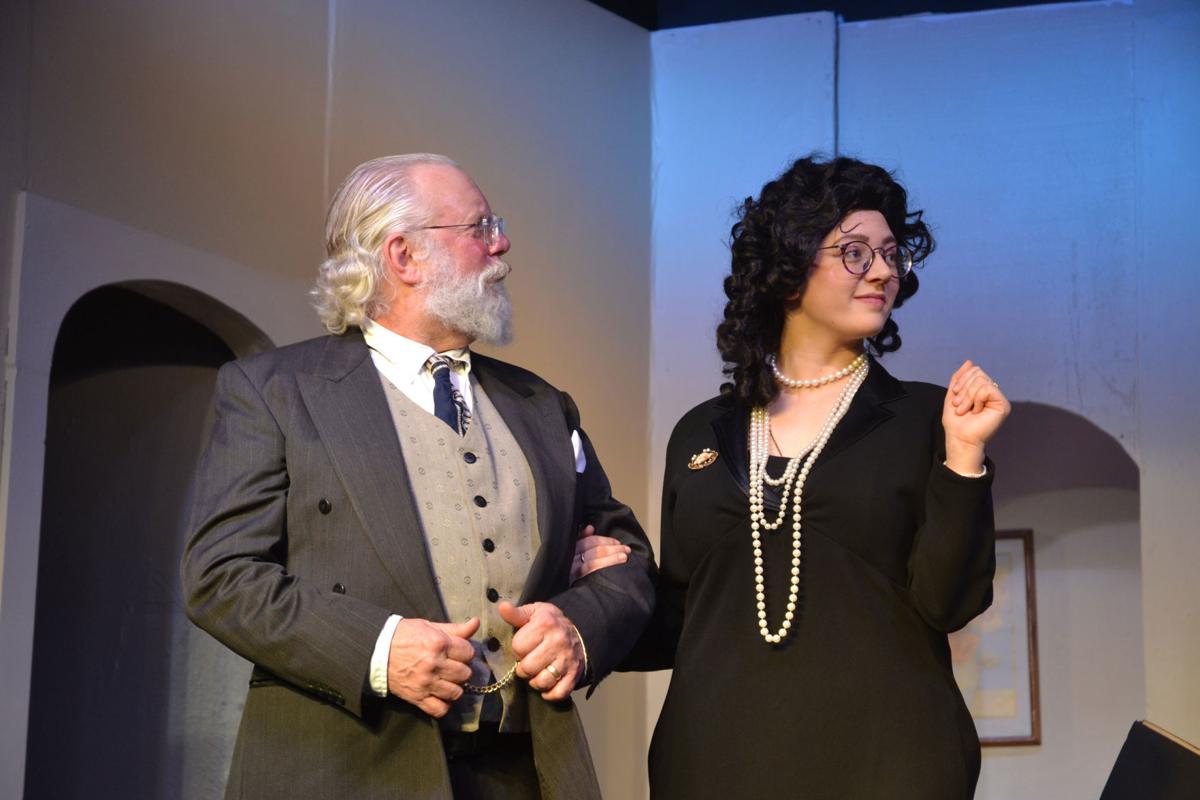 Henry Benish (Bradley Lemire) and Polly Benish (Laura Rovi) are two actors playing Lord Henry and Lady Margaret in the Rick Abbot comedy “Play On!” the tale of a bumbling community theater troupe trying to put on a show.

Drew Rekemeyer, left, Bradley Lemire, Laura Rovi, Becca Moore, Kevin Riddle and Matt Nemec are part of the cast of “Play On!” the hilarious tale of a community theater troupe trying to put together a show. The CTA production is on stage at Ashland's Rinehart Theater Feb. 1-10.

Henry Benish (Bradley Lemire) and Polly Benish (Laura Rovi) are two actors playing Lord Henry and Lady Margaret in the Rick Abbot comedy “Play On!” the tale of a bumbling community theater troupe trying to put on a show.

When one goes to see a community theater production, the emphasis is usually on “theater” – that polished final product that transports an audience to another place and, at its best, offers a transformative experience. In the Rick Abbot comedy, “Play On!” the emphasis instead is solidly on the “community” – the dedicated folks who make that theater magic happen.

This comedic behind-the-scenes look at a local theater troupe is the next offering in the Chequamegon Theater Association's 2018-19 season, on stage at Ashland's Rinehart Theatre Feb. 1-10.

“Play On!” opens during a rehearsal of a new play titled “Murder Most Foul,” penned by local playwright Phyllis Montague (Karen Swanstrom). This murder mystery isn't particularly good – the clumsy exposition and stale plot lines are hilarious – and the playwright is a horror to work with. She keeps making drastic changes to the script only days before the play is supposed to open. But Phyllis has agreed to let the troupe use her work without royalties, which means the revenue from the play could actually put the organization into the black. Strong incentive, indeed.

The group works through muffed lines, a back-stage romance between Violet (Becca Moore) and Billy (Kevin Riddle), two actors Polly (Laura Rovi) and Saul (Matt Nemec) who despise one another, and constant interference from Phyllis. It's enough to make director Gerry Dunbar (Gregory John) loose his composure more than once.

If Act I has an audience wondering if this play will ever successfully open, Act II, the dress rehearsal, creates even more doubt. Missed sound cues, hilariously flubbed lines and still further interference from the dotty playwright make this dress rehearsal anything but confidence-building.

But, miraculously, the show does go on and in Act III we get to see the entire opening night of “Murder Most Foul.” A triumph it is not. But as the actors bumble their way through this wreck of a performance, the audience will be laughing the whole way.

Director Presley Nuutinen, one of CTA's up-and-coming younger generation of actors and directors, demonstrates she has a deft hand with comedy, keeping the timing snappy and the staging appropriately farcical.

As director Gerry Dunbar, Gregory John is in turn cajoling, understanding and as demanding as one can be when working with a cast of volunteers. He and his stage manager Aggie (Laura Comer) and his techie Louise (Beth Kurtz) may recognize the shortcomings of the play (and the cast), but they will never say quit.

Bradley Lemire and Laura Rovi are the “couple who act” – Henry and Polly Benish. They have also managed to make a friend of the playwright – who seems to give Polly a bigger role every time they invite her over to dinner.

Drew Rekemeyer, is “the high school student” Marla Smith. (And, yes, Rekemeyer is a high school student). She is the one who studies biology when off stage and worries about getting in trouble with her parents when rehearsal runs late. Of course, she has the role of the maid.

As the caustic Saul Watson, Matt Nemec lobs barbs at his fellow actors – that is, until he nips a bit too much in Act III. Then there is no telling what he may say next.

Becca Moore as Violet overacts splendidly, as does Kevin Riddle as Billy. They are that couple who end up transforming the intimacy of the theater into some real-life intimacy.

And as the alternately ditsy and demanding playwright Phyllis Montague, Katherine Swanson is outstanding.

“Play On!” shows how just about everything can go wrong in a community theater production. And that makes it just right.